Sergeant Major Edgar Foshee, a devout anti-communist, served as a combat medic in the U.S. Army Special Forces. His former wife Thuong Nguyen Cuc Foshee was held without formal charge by the government of Vietnam starting in September 2005. She was eventually convicted of terrorism and returned to the United States in November 2006 after her early release for medical problems.

In 1974, he retired from the United States Army, and later retired as an agent from the Central Intelligence Agency (CIA). He had served in Vietnam with both organizations, assisting the South Vietnamese government against the Communist North Vietnamese Army and their Viet Cong agents.[ citation needed ]

He owned a construction company until 1980, and retired with his wife to Florida.

On April 30, 1995, he was appointed Chairman of the International Committee of an exiled anti-communist organization known as The Government of Free Vietnam. 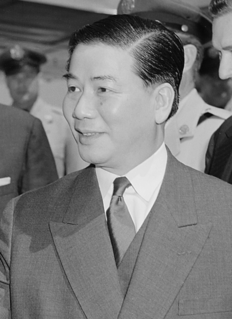 Ngô Đình Diệm was a Vietnamese politician. He was the final prime minister of the State of Vietnam (1954–55), and then served as President of South Vietnam from 1955 until he was captured and assassinated during the 1963 military coup.

South Vietnam, officially the Republic of Vietnam, was a country that existed from 1955 to 1975, the period when the southern portion of Vietnam was a member of the Western Bloc during part of the Cold War. It first received international recognition in 1949 as the State of Vietnam within the French Union, with its capital at Saigon, before becoming a republic in 1955. South Vietnam was bordered by North Vietnam to the north, Laos to the northwest, Cambodia to the southwest, and Thailand across the Gulf of Thailand to the southwest. Its sovereignty was recognized by the United States and 87 other nations, though it failed to gain admission into the United Nations as a result of a Soviet veto in 1957. 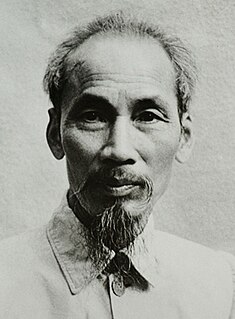 Hồ Chí Minh, born Nguyễn Sinh Cung, also known as Nguyễn Tất Thành, Nguyễn Ái Quốc, Bác Hồ, Người cha dân tộc or simply Bác, was a Vietnamese revolutionary and politician. He served as Prime Minister of Democratic Republic of Vietnam from 1945 to 1955 and President from 1945 until his death in 1969. Ideologically a Marxist–Leninist, he served as Chairman and First Secretary of the Workers' Party of Vietnam. He was born in Nghệ An province, in Central Vietnam. 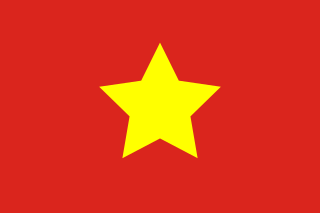 The Việt Minh was a national independence coalition formed at Pác Bó by Hồ Chí Minh on May 19, 1941. Also known as the Việt Minh Front, it was created by the Indochinese Communist Party as a form of united national front in Vietnam. 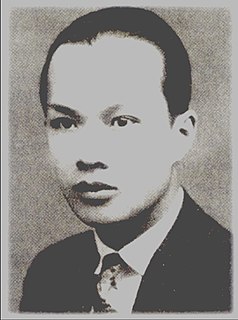 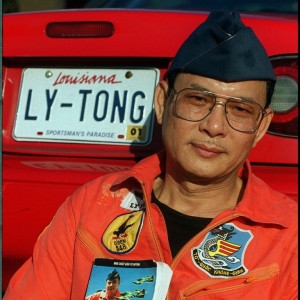 Lê Chí Thức has been a spokesperson for the Government of Free Vietnam since 1998-2002.

The Personalist Labor Revolutionary Party, often simply called the Cần Lao Party, was a Vietnamese political party, formed in the early 1950s by the President of South Vietnam Ngô Đình Diệm and his brother and adviser Ngô Đình Nhu. Based on mass-organizations and secret networks as effective instruments, the party played a considerable role in creating a political groundwork for Diệm's power and helped him to control all political activities in South Vietnam. The doctrine of the party was ostensibly based on Ngô Đình Nhu's Person Dignity Theory or Personalism and Emmanuel Mounier's Personalism.

Thuong Nguyen Cuc Foshee is a Vietnamese American who was held without formal charge by the government of Vietnam after her arrest in September 2005 on accusations of plotting to broadcast anti-communist radio messages under the direction of Government of Free Vietnam (GFVN), an anti-government group. She is divorced from GFVN representative Edgar Foshee. Their daughter Elizabeth McCausland, a lawyer, actively campaigned for her mother's freedom politically through United States government officials. Ms. Foshee was ultimately arrested and charged with conducting terrorist activities and went on trial November 10, 2006. She, along with six other defendants, was convicted and sentenced to 15 months with credit for time served.

The United Front for the Liberation of Oppressed Races was an organization whose objective was autonomy for the Degar tribes in Vietnam. Initially a political movement, after 1969 it evolved into a fragmented guerrilla group that carried on simultaneous insurgencies against the governments of the Republic of Vietnam under Presidents Ngo Diem and Nguyen van Thieu and the Democratic Republic of Vietnam of Ho Chi Minh. Opposed to all forms of Vietnamese rule, FULRO fought against both sides in the Vietnam War of the Viet Cong - communists and also against the American allied Army of the Republic of Vietnam at the same time. FULRO's primary supporter during the 1960s and early 70s conflict in Southeast Asia was the Kingdom of Cambodia, with some aid sent by Mao Tse-tung's Peoples' Republic of China. 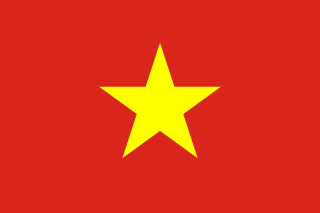 Nguyễn Tiến Trung is a pro-democracy activist in Vietnam. As the founder and leader of the Assembly of Vietnamese Youth for Democracy Trung has been one of the outspoken political dissidents in Vietnam. He was arrested on July 7, 2009 by the public security of Vietnam for allegedly "plotting to overthrow the government of Vietnam." The accusation was persistently rejected domestically and internationally by some Vietnam analysts such as Pham Hong Son and Carl Thayer.

After World War II and the collapse of Vietnam's monarchy, France attempted to re-establish its colonial rule but was ultimately defeated in the First Indo-China War. The Geneva Accords in 1954 partitioned the country temporarily in two with a promise of democratic elections in 1956 to reunite the country. However, the United States and South Vietnam insisted on United Nations supervision of any election to prevent fraud, which the Soviet Union and North Vietnam refused. North and South Vietnam therefore remained divided until The Vietnam War ended with the Fall of Saigon in 1975.

Vietnamese Revolutionary Youth League, or short for Thanh Nien, was founded by Nguyen Ai Quoc in Guangzhou in the spring of 1925. It is considered as the “first truly Marxist organization in Indochina” and “the beginning of Vietnamese Communism”. With the support of Chinese Communist Party and the Kuomintang Left, during the period of 1925-1927, the League managed to educate and train a considerable number of Marxist-Leninist revolutionaries, preparing the prominent leadership for the Communist Party of Vietnam and the Vietnamese Revolution. At the time, Vietnam was part of colonial French Indochina.