Elizabeth Prann is an anchor/reporter for HLN formerly of the Fox News Channel, based in the Fox News Washington, D.C. bureau. Prann previously worked from July 2008 to January 2010 as a reporter, fill-in anchor and producer for the Panama City affiliate of NBC, WJHG. [3] She joined HLN in 2018.

HLN is an American pay television news channel owned by CNN. Originally branded as CNN2, and later CNN Headline News, the channel was originally meant to broadcast standardized, regularly updated segments at 30-minute intervals 24 hours a day, briefly covering various areas of interest. In 2014, the network's programming was reorganized with an emphasis on social media. This practice was dropped by 2016 in favor of traditional news broadcasts, with part of its lineup dedicated to true crime shows drawn mainly from the library of defunct sister network Court TV, as well as new original programs within the genre. 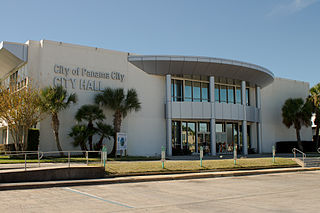 Panama City is a city and the county seat of Bay County, Florida, United States. Located along U.S. Route 98, it is the largest city between Tallahassee and Pensacola. It is the more populated of two principal cities of the Panama City-Lynn Haven, Florida Metropolitan Statistical Area. As of the 2010 census, the population was 36,484. The city was catastrophically damaged when Hurricane Michael made landfall as a Category 5 hurricane on October 10, 2018.

She first worked for Fox News as a production assistant for On the Record w/ Greta Van Susteren from 2006 to 2008. In that capacity, Prann played a significant role in the launch of Gretawire.com; creating podcasts and developing content for the website. She joined Fox News as a correspondent in February 2010. 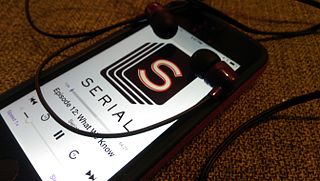 A podcast is an episodic series of digital audio or video files which a user can download in order to listen. Alternatively, the word "podcast" may refer to the individual component of such a series or to an individual media file.

During the Deepwater Horizon oil spill, Prann reported extensively on the scene. During Fox News' immediate coverage of the West Fertilizer Plant explosion, she served as the network's anchor.

The Deepwater Horizon oil spill is an industrial disaster that began on April 20, 2010, in the Gulf of Mexico on the BP-operated Macondo Prospect, considered to be the largest marine oil spill in the history of the petroleum industry and estimated to be 8% to 31% larger in volume than the previous largest, the Ixtoc I oil spill, also in the Gulf of Mexico. The U.S. Federal Government estimated the total discharge at 4.9 million barrels. After several failed efforts to contain the flow, the well was declared sealed on September 19, 2010. Reports in early 2012 indicated that the well site was still leaking. The Deepwater Horizon oil spill is regarded as one of the largest environmental disasters in American history.

Prann received a bachelor's degree in journalism from the University of Florida, where she was a member of the women's lacrosse team and the Delta Gamma sorority. 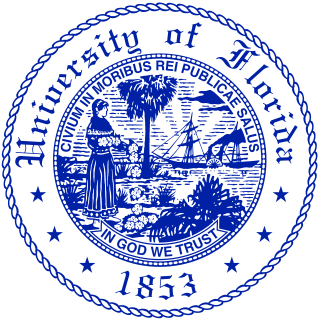 Darren Christopher O'Day is an American professional baseball pitcher for the Atlanta Braves of Major League Baseball (MLB). He played college baseball for the University of Florida, and previously played in MLB for the Los Angeles Angels, New York Mets, Texas Rangers and Baltimore Orioles. O'Day is one of the few Major League pitchers to throw submarine pitches. 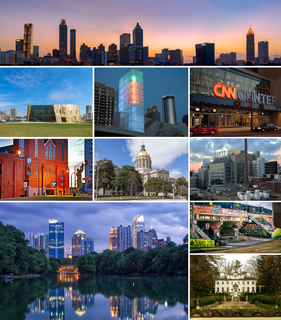 Atlanta is the capital and most populous city in the U.S. state of Georgia. With an estimated 2018 population of 498,044, it is also the 37th most-populous city in the United States. The city serves as the cultural and economic center of the Atlanta metropolitan area, home to 5.9 million people and the ninth-largest metropolitan area in the nation. Atlanta is the seat of Fulton County, the most populous county in Georgia. Portions of the city extend eastward into neighboring DeKalb County. 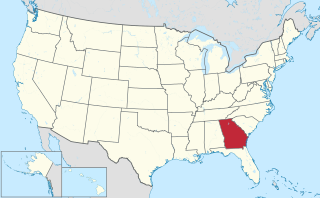 Ashleigh Dennistoun Banfield is a Canadian-American journalist who until October 26, 2018 was a host and legal expert at the HLN TV network. She is a former host of Legal View with Ashleigh Banfield and Early Start on CNN. As of April 28, 2018 she also fills in as a backup host on the A&E hit show Live PD. Starting April 22, 2019, Banfield was the host of the A&E show Live Rescue but was replaced after the 1st season.

Kyra Phillips is an American news anchor and reporter. She is best known for her work of thirteen years at CNN. 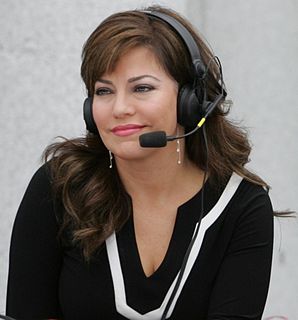 Robin Michelle Meade is an American journalist and television news anchor. She is the lead news anchor for HLN's morning show Morning Express with Robin Meade. Meade is a former Miss Ohio and began her broadcasting career with local stations in that state. She joined HLN in 2001. She has won a regional Emmy Award. Meade released country music albums in 2011 and 2013.

Laurie Walker Dhue is an American television journalist. Until April 2015, Dhue hosted episodes of TheBlaze's investigative journalism news magazine For the Record, and presented highlights of evening news on TheBlaze.com TV. Previously she was a Fox News Channel anchor from 2000–08, reporting for the television show Geraldo at Large and the host of Fox ReportWeekend. 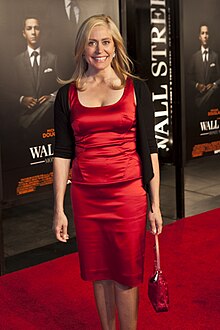 Melissa Ann Francis is an American actress and commentator for the Fox Business Network (FBN) and Fox News (FNC).

Carol Costello is an American television commentator and former host of CNN Newsroom. In 2017, she left CNN to join sister network HLN, based in Los Angeles. In October 2018, HLN announced that Costello would be let go, with the final broadcast of her show taking place on October 26.

Nischelle Renee Turner is an entertainment correspondent for HLN's Showbiz Tonight and CNN. Previously she was an entertainment correspondent for KNBC in Los Angeles. She was a general assignment reporter for KTTV FOX 11 from 2004 and to October 2, 2008 and worked as a sideline reporter for FOX's Sunday NFL broadcasts, and did segments for a show called Dailies. Prior to KTTV, she worked for WEHT, the ABC affiliate in Evansville, Indiana and for WVUE, the FOX Affiliate in New Orleans. She is a native of Columbia, Missouri. She attended the University of Missouri, and graduated from its Journalism school in 1998. She used to work with either analyst Kurt Warner or Torry Holt and either play-by-play Chris Myers, Sam Rosen (sportscaster), or Chris Rose. She also works with Paul Sunderland on college basketball telecasts.

Lindsay Ann Czarniak, is an American sports anchor and reporter. She currently works as a studio host for Fox Sports NASCAR coverage. After spending six years with WRC-TV, the NBC owned-and-operated station in Washington, D.C., Czarniak joined ESPN as a SportsCenter anchor in August 2011 and left ESPN in 2017.

Lynn Marie Smith currently serves as anchor/correspondent for HLN and was named host of the network's popular news and lifestyle program, Weekend Express in the fall of 2013. Was named host of On The Story in March 2019. 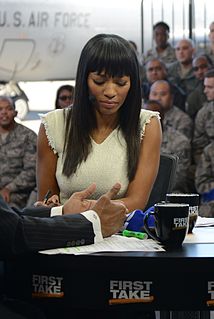 Cari Champion is an American broadcast journalist and television personality. She has worked as an anchor and reporter for the Tennis Channel and as the host of ESPN2's First Take. In July 2015, Champion became an anchor for ESPN's flagship program SportsCenter.

Molly Anne McGrath is an American sportscaster and studio host. She is currently a sideline reporter for ESPN’s college football and college basketball telecasts.

Kristen Melissa Ledlow is an American sports anchor. She currently works for NBA TV as the host of NBA Inside Stuff. She has also served as a sports anchor for HLN and CNN.