The classification of European rivers comes from the fish fauna found in them. Changes in taxonomic composition relate to physical and chemical changes that occur longitudinally.

Zonation (from headwater to estuary)

This zone has a characteristic steep gradient, fast flowing water and cool temperature. The fast flow rate causes turbulence which keeps the water well oxygenated. Fish species found in this zone usually lay adhesive eggs that can stick to the substrate, this is to help prevent eggs being carried down stream by the water flow.

Similar in physical characteristics to the Trout zone, although the temperature is usually slightly higher. Fish species in this zone also lay adhesive eggs.

Characteristic fish species include all of the above species, with the addition of;

This zone is essentially lowland, but retains some characteristics of upland rivers. It has a gentle gradient with a moderate water flow and temperature. It also has a good oxygen content and a mixed substrate of silt and gravel in which plants can take root. Most of the fish species found in this zone lay their eggs in the vegetation on the river bed, this provides them with good protection and allows the eggs a good supply of oxygen given off from photosynthesis in the plants.

Characteristic fish species include all of the species from the previous zones with addition of;

The true lowland zone, has a very gentle gradient and slow flowing water, there is usually good oxygen content but the temperature is much more variable than in the other zones. This zone has a silty substrate and is often turbid. Fish species found in this zone lay adhesive eggs in the weeds. Most upland fish species can not survive in this zone.

Characteristic fish species include only a few species from the Barbel zone (Roach, Rudd, Perch and Pike), with the addition of:

The common rudd is a bentho-pelagic freshwater fish, widely spread in Europe and middle Asia, around the basins of the North, Baltic, Black, Caspian and Aral seas.

The roach, also known as the common roach, is a fresh- and brackish-water fish of the family Cyprinidae, native to most of Europe and western Asia. Fishes called roach can be any species of the genera Rutilus and Hesperoleucus, depending on locality. The plural of the term is also roach.

Lake Klopein is a lake near the town of Völkermarkt located within the municipality of Sankt Kanzian in Carinthia, Austria. Lake Klopein is the remaining lake of previously larger lake area, which has spanned over today's Kühnsdorf area. With water temperatures reaching 29 °C it is among the warmest lakes in the Alpic region.

Pomphorhynchus laevis is an endo-parasitic acanthocephalan worm, with a complex life cycle, that can modify the behaviour of its intermediate host, the freshwater amphipod Gammarus pulex. P. laevis does not contain a digestive tract and relies on the nutrients provided by its host species. In the fish host this can lead to the accumulation of lead in P. laevis by feeding on the bile of the host species. 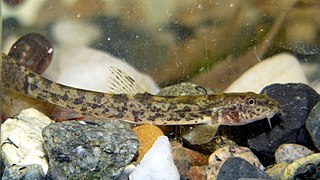 The stone loach is a European species of fresh water ray-finned fish in the family Nemacheilidae. It is one of nineteen species in the genus Barbatula. Stone loaches live amongst the gravel and stones of fast flowing water where they can search for food. The most distinctive feature of this small fish is the presence of barbels around the bottom jaw, which they use to detect their invertebrate prey. The body is a mixture of brown, green and yellow. 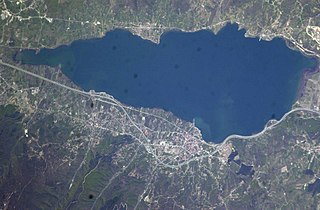 Lake Sapanca is a fresh water lake in Turkey, between the Gulf of İzmit and the Adapazarı Meadow. The lake has a catchment area of 251 km², surface area is 45 km², a length 16 km east-west / 5 km north-south, and a maximum depth of 52 m. Lake Sapanca, Turkey 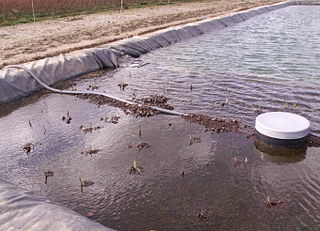 A lava filter is a biological filter that uses lavastone pebbles as support material on which microorganisms can grow in a thin biofilm. This community of microorganisms, known as the periphyton break down the odor components in the air, such as hydrogen sulfide. The biodegradation processes that occurs is provided by the bacteria themselves. In order for this to work, sufficient oxygen as well as water and nutrients is to be supplied.

Örtze is a river of Lower Saxony, Germany. The Örtze rises north of Munster in the Große Heide and, after 62 kilometres (39 mi), joins the Aller southeast of Winsen.

In the 10th edition of Systema Naturae, Carl Linnaeus described the Pisces as:

Always inhabiting the waters; are swift in their motion and voracious in their appetites. They breathe by means of gills, which are generally united by a bony arch; swim by means of radiate fins, and are mostly covered over with cartilaginous scales. Besides the parts they have in common with other animals, they are furnished with a nictitant membrane, and most of them with a swim-bladder, by the contraction or dilatation of which, they can raise or sink themselves in their element at pleasure.

Goussia is a taxonomic genus, first described in 1896 by Labbé, containing parasitic protists which largely target fish and amphibians as their hosts. Members of this genus are homoxenous and often reside in the gastrointestinal tract of the host, however others may be found in organs such as the gallbladder or liver. The genera Goussia, as current phylogenies indicate, is part of the class Conoidasida, which is a subset of the parasitic phylum Apicomplexa; features of this phylum, such as a distinct apical complex containing specialized secretory organelles, an apical polar ring, and a conoid are all present within Goussia, and assist in the mechanical invasion of host tissue. The name Goussia is derived from the French word gousse, meaning pod. This name is based on the bi-valve sporocyst morphology which some Goussians display. Of the original 8 classified Goussians, 6 fit the “pod” morphology. As of this writing, the genera consists of 59 individual species.

Goggausee is a lake of Carinthia, Austria.The Goggausee lies in the area of the Gurktaler Alps, north of Feldkirchen in Carinthia, in a very windless pool. Due to the sheltered location, the water is little mixed despite its small depth and already after a few meters oxygen poor.

The River Leck is a 7.5 mile 12.070 km long river in Buckinghamshire and Northamptonshire; it is a small tributary of the River Great Ouse. 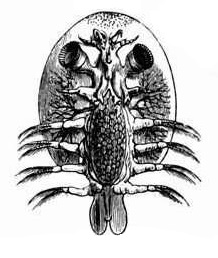 Argulus foliaceus(or Monoculus foliaceus Linnaeus, 1758 name) is a species of crustaceans in the family Argulidae, the fish lice. It is sometimes called the common fish louse. It is "the most common and widespread native argulid in the Palaearctic" and "one of the most widespread crustacean ectoparasites of freshwater fish in the world", considering its distribution and range of hosts. It can cause the severe disease state argulosis in a wide variety of fish species. It is responsible for epizootic outbreaks that have led to the collapse of aquaculture operations. Fish lice are not related to lice, which are insects.

Padbury Brook is a stream/river in Oxfordshire and Buckinghamshire; it is a small tributary of the River Great Ouse.