According to director Stelvio Massi, the film was inspired by the character of Philip Marlowe, who he tried to have Maurizio Merli imitated to make him "more human, less violent cop, somewhat different from those he had already successfully played." [1] Merli stated that when the producer found out that Merli's character would only shoot his gun once in the film,he was told "Come on, he must be shooting like mad, or else nobody's going to watch this movie!" [1]

Fearless was shot at Incir - De Paolis studios in Rome and on location in Vienna. [1]

Fearless was distributed theatrically in Italy by Fida on February 3, 1978. [1] It grossed a total of 1,146,557,460 Italian lire domestically. [1] It was released in France and Greece on home video as Magnum Cop and in Sweden on home video as Fearless Fuzz, A Matter of Honour. [1]

Maurizio Merli was an Italian film actor and a star of many Italian police thrillers.

Violent Naples is a 1976 poliziottesco film directed by Umberto Lenzi. It starred Maurizio Merli, John Saxon and Barry Sullivan, and was the first sequel to Violent Rome. Saxon appeared in several such movies. 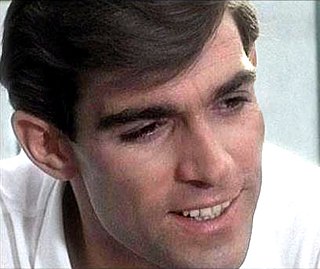 Fabio Testi is an Italian actor. After growing up witnessing film work done around Lake Garda, Testi entered the sets of the film and began work as a stuntman and a double on set, where he worked as a stuntman on The Good, the Bad, and the Ugly. Testi continued stunt work and getting roles in low budget genre films until he was cast in Vittorio De Sica's film The Garden of the Finzi-Continis. Following this film, Testi became a star in Italy, appearing in some artistic films by Giuseppe Patroni Griffi and Claude Chabrol. Testi also continued to work in poliziotteschi genre films in the 1970s as well as a few gialli, and gained infamy for his publicised relationships with actresses Ursula Andress and Charlotte Rampling.

The Cynic, the Rat and the Fist is an Italian poliziotteschi film directed in 1977 by Umberto Lenzi. The film was described by Italian film critic and historian Roberto Curti as "a sequel of sorts" to Lenzi's 1976 The Tough Ones, with Maurizio Merli reprising the role of Inspector Leonardo Tanzi. 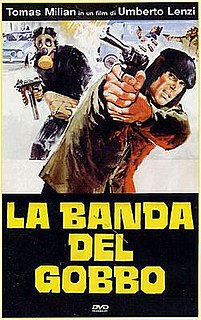 Brothers Till We Die is a 1977 Italian poliziottesco-action film by Umberto Lenzi. This film is the last collaboration among Lenzi and Tomas Milian. In this movie Milian plays two characters, Vincenzo Marazzi a.k.a. "The Hunchback" that he already played for Lenzi in Rome Armed to the Teeth, and his twin brother Sergio Marazzi a.k.a. "Er Monnezza", a role that he played for the first time in Lenzi's Free Hand for a Tough Cop and later resumed in Destruction Force by Stelvio Massi.

Mark il poliziotto is an Italian poliziottesco film directed in 1975 by Stelvio Massi. This film obtained a great commercial success and generated two sequels, Mark il poliziotto spara per primo and Mark colpisce ancora. The film represents the breakout for the lead actor, Franco Gasparri, who was already a star of Italian fotoromanzi.

Violent Rome is an Italian 1975 poliziottesco film directed by Marino Girolami It obtained a great commercial success and launched the career of Maurizio Merli. The film has two sequels, Violent Naples and A Special Cop in Action.

Special Cop in Action is a 1976 Italian poliziottesco film directed by Marino Girolami, here credited as Franco Martinelli. The film is the final chapter in the Girolami's trilogy about Commissioner Betti, after Violent Rome and Violent Naples.

Highway Racer is a 1977 Italian poliziottesco film directed by Stelvio Massi. It was the first collaboration between Massi and Maurizio Merli, who worked together in six titles between 1977 and 1980.

The Rebel ') is a 1980 poliziottesco film directed by Stelvio Massi. 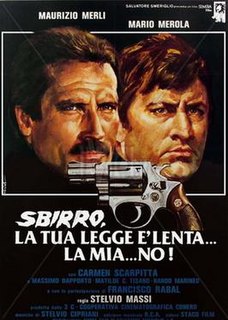 Hunted City is a 1979 Italian poliziottesco film directed by Stelvio Massi. It represents one of the few negative roles for Merola.

Destruction Force is a 1977 Italian poliziottesco directed by Stelvio Massi. It is the second film in which Tomas Milian plays the character of Monnezza after Free Hand for a Tough Cop.

Mark Strikes Again is a 1976 Italian poliziottesco film directed in 1976 by Stelvio Massi. Originally planned as an original film, during the shoots and the post-production process it was turned into a second sequel of Mark of the Cop. 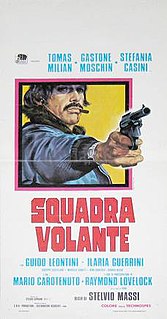