The GYATA-64 is a Hungarian antipersonnel mine, very similar to the Russian PMN mine in design and appearance. However, the Gyata-64 mine has a 300 gram explosive charge compared with the 249 gram charge in a PMN mine. As a result, the Gyata-64 is the most powerful AP blast mine commonly encountered, for which reason it is particularly deadly.

To put things in perspective, most anti-personnel blast mines (e.g. the VS-50) contain around 50 grams of explosive, which is enough to destroy all or part of a victim's foot. In marked contrast, the 300 gram charge inside a Gyata-64 mine can easily destroy a victim's entire leg (often requiring amputation high above the knee) in addition to inflicting severe injuries on the adjacent limb, which may also require some form of amputation.

The Gyata-64 mine is cylindrical with a plastic body and a black rubber pressure cap. The fuze protrudes from either side of the mine. Although the body is plastic, the fuze itself contains a steel striker and spring, which make it detectable by conventional mine detectors. It is not a blast resistant mine.

Hungary ceased production of all antipersonnel mines before 1995 [1] and by 1998 had destroyed its stock pile of 149,686 GYATA-64 mines. [1] Approximately 1,500 were retained for training and research as of 2004. Legacy stockpiles may exist in some foreign countries, in addition to those already planted in existing minefields. Examples have been found in Mozambique, Angola, Lebanon and Yemen.

The render safe procedures are the same as those used for the PMN mine.

The GATOR mine system is a United States military system of air-dropped anti-tank and anti-personnel mines developed in the 1980s to be compatible with existing cluster dispensers. It is used with two dispenser systems—the Navy 230 kg (500 lb) CBU-78/B and the Air Force 450 kg (1,000 lb) CBU-89/B. Additionally the mines are used with the land- and helicopter-based Volcano mine system.

An explosive booster is a sensitive explosive charge that acts as a bridge between a conventional detonator and a low-sensitivity explosive such as TNT. By itself, the initiating detonator would not deliver sufficient energy to set off the low-sensitivity charge. However, it detonates the primary charge, which then delivers an explosive shockwave that is sufficient to detonate the secondary, main, high-energy charge.

A firing pin or striker is part of the firing mechanism used in a firearm or explosive device, designed to ignite combustions/detonations by delivering an impact force to shock-sensitive compounds known as primers. Firing pins may take many forms, though the types used in fuzes for single-use devices generally have a sharpened point. In contrast, firing pins used in firearms usually have a small, rounded portion designed to strike the primer of a cartridge, detonating the priming compound, which then ignites the propellant (inside) or fires the detonator and booster.

Type 72 Non-Metallic is a Chinese circular, plastic bodied landmine which is designed to damage or destroy a vehicle by blast effect.

The M14 mine "Toepopper" is a small anti-personnel land mine first deployed by the United States circa 1955. The M14 mechanism uses a belleville spring to flip a firing pin downwards into a stab detonator when pressure is applied. Once deployed, the M14 is very difficult to detect because it is a minimum metal mine, i.e. most of its components are plastic. Because of this, the design was later modified to ease mine clearance via the addition of a steel washer, glued onto the base of the mine.

The PROM-1 is a Yugoslavian manufactured bounding anti-personnel mine. It consists of a cylindrical body with a pronged fuze inserted into the top of the mine. It is broadly similar in operation to the German S-mine. 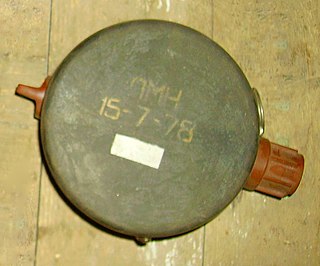 The PMN series of blast anti-personnel mines were designed and manufactured in the Soviet Union. They are one of the most widely used and commonly found devices during demining operations. They are sometimes nicknamed "black widow" because of their dark casings.

The VS-MK-2 is a plastic bodied scatterable anti-personnel blast mine manufactured by the now-defunct Valsella Meccanotecnica, SpA, an Italian high-tech defence contractor that specialized in the development and production of area denial systems. The mine is extremely difficult to detect because of its low metal content i.e. it is a minimum metal mine. Additionally, it is resistant to blast overpressure due to a pneumatic system in the fuze. The mine will also function in up to 1 metre of water. An electrically fused anti-handling version of the mine was also produced designated VS-MK-2-EL, VS-MK-2-E or VS-MK2 AR-AN to hinder clearance attempts. Although Italy has ceased production of this mine it may still be found in uncleared minefields located in Angola, Sudan and the Western Sahara.

The M15 mine is a large circular United States anti-tank blast mine, first deployed during the Korean War. Essentially, it is a larger version of the M6A2 anti-tank mine, which it replaced. Although the M15 has been superseded by the M19 mine, the U.S. retains large stocks of M15s because they are still regarded as reliable and effective weapons. When used against main battle tanks the M15 is primarily a "track-breaker" which creates mobility kills, but has a comparatively small likelihood of causing crew fatalities. However, when used against lighter vehicles such as APCs or unarmored vehicles such as trucks the damage inflicted is much more severe.

The VS-50 is a circular plastic cased anti-personnel blast mine that entered production in 1985, formerly manufactured by the now-defunct Valsella Meccanotecnica SpA, an Italian high-tech defence industry specialized in area denial systems which was also the manufacturer of the Valmara 69 and one of the first industries in the world to implement plastic construction for landmines. The design is similar to the TS-50 and VS-MK2 mine. It is blast resistant and can be used in a minimum metal configuration. Though unlikely to kill, the explosive charge contained within a VS-50 is quite sufficient to destroy the victim's foot: the blast is capable of penetrating 5 mm of mild steel leaving an 80 mm-diameter hole.

The M19 is a large square plastic cased United States anti-tank blast mine. Intended to replace the M15 mine, the design dates from the mid-1960s and contains only two metal components: the copper detonator capsule and a stainless steel firing pin which weighs 2.86 grams. It is a minimum metal mine, which makes it very difficult to detect after it has been emplaced. This mine is produced under licence in Chile, South Korea and Turkey. A copy is produced in Iran. It is found in Afghanistan, Angola, Chad, Chile, Cyprus, Iran, Iraq, Jordan, South Korea, Lebanon, the Western Sahara, and Zambia.

A minimum metal mine is a land mine that is designed to use the smallest amount of metal possible in its construction. Typically, the only metal components are located inside the fuze mechanism which triggers detonation. Both minimum metal anti-tank and anti-personnel mines exist. Some designs contain virtually no metal at all, e.g., less than a gram. This is achieved by encasing the explosive charge in a plastic, wooden, or glass body, with metallic components limited to the few small parts in the fuze which can not easily be made from other materials, such as the spring, striker tip, and shear pin. Minimum metal mines are extremely difficult to detect using conventional metal mine detectors and usually require modern techniques, such as robotic Multi Period Sensing (MPS) equipment, to identify, but it is still extremely difficult to find non-metallic mines. These techniques are usually restricted to well-funded international mine clearing organizations and major militaries, making minimum metal mines especially pernicious where they are encountered.

The FMK-1 is a small circular Argentina anti-personnel blast mine which, when fitted with a stiffened pressure plate, is also used as the fuze for the FMK-3 and FMK-5 anti-tank mines. The mine has a circular plastic body, with a number of small ribs running vertically around the outside of the mine, with the circular detonator and striker protruding on each side. The pressure plate has a distinctive six pointed star shape ribbing for stiffness. The bottom of the mine has small base plug inside which a small stud is installed. The stud increases the activation pressure of the mine. A metal detector disc can be added to the bottom of the mine, but it is not often used. It is actually in service with the Argentine Army.

The C3A1 and C3A2 are Canadian minimum metal anti-personnel mines. The differences between them are very minor and hard to distinguish visually. Elsie mines were first deployed by Canada in 1962, by the United States in 1965 and by Japan in 1967.

The TS-50 is a 90 mm (3.5 in) diameter circular Italian blast resistant minimum metal anti-personnel mine designed and produced by Valsella Meccanotecnica.

A tilt-rod fuze is a device used to trigger anti-vehicle landmines. Typically it consists of a vertical pole, normally around a meter high, which is connected to the top of a landmine. When the track or main body of a vehicle passes over the mine, the rod is tilted, releasing a spring-loaded striker which triggers a pyrotechnic delay of approximately half a second, followed by detonation of the main explosive charge. The small time delay allows the vehicle to continue over the mine before detonating, exposing more of it to the blast. A tilt-rod fuze has a number of advantages over pressure fuzes - it acts across the entire width of a vehicle, rather than just its tracks or tires. This allows it to attack the vehicle's belly and potentially cause a catastrophic kill. Additionally, tilt rod fuzes tend to be resistant to blast overpressure clearing methods, which can trigger most pressure fuzes.

The PMA-2 is a Yugoslavian blast antipersonnel mine. Sometimes referred to as the 'Pašteta', due to its superficial resemblance to a meat-pâté tin. The mine is constructed from dark green plastic, with a distinctive plunger which has six petals radiating from it.

The DM-39 is a German anti-personnel, cylindrical-shaped and plastic-made blast mine intended for emplacement under an anti-tank mine. It is pressure initiated and has a clockwork delayed arming mechanism, making it suitable for its anti-lift role. A secondary fuze well is located on the lower side of the mine, allowing for use of a secondary anti-disturbance fuze. The mine measures 100 by 40 mm with a 300-gram TNT/RDX explosive charge, with three variants of the same dimensions, the DM-39A1, the DM-68 and the DM-68A1.

Poudreries Réunies de Belgique SA was one of Belgium's oldest and largest manufacturers of munitions, once the second-largest Belgium armaments manufacturer. The company indirectly started in 1778 in Wetteren as a gunpowder factory. By its 200th anniversary in 1979 it had 73 factories throughout the world, with the headquarters in Brussels.