The movie was released on 23 December 1988 to excellent collections which dropped following the negative reviews it received. India Today in January 1989 reported that by the second week collections in Mumbai area were ranging between 28 - 40% resulting in the film being declared a box office flop. but performed financially well in 90s Re runs [1]

Thakur Hansraj (Amrish Puri) is a greedy man who kills his brother-in-law, takes the signature of his sister Bharati Devi (Nirupa Roy) on property papers under a false pretext and takes control of her property. Bharati Devi's son, Ganga (Amitabh Bachchan) having taken a pledge to avenge the wrong done to his family, ends up becoming a truck driver.

One day Jamuna (Meenakshi Sheshadri) jumps into his truck one day to save herself from a goon who is after her. Ganga is forced to stop the truck due to a road block. When it starts raining, Ganga ends up going to a nearby lodge to take shelter, pretending he and Jamuna are a couple. The next day, when the goon returns to take Jamuna away forcibly, Ganga gets into a fight with him. When Jamuna falls in deep ice, in the process of providing her with jism ki garmi, he ends up having sex with her. Ganga is arrested for beating up Thakur's son and is jailed for two years. When he returns, Thakur sends his aides to kill him. A blast takes place at the bridge and Jamuna falls into the river along with her child. Ganga saves his child but cannot find Jamuna.

Jamuna, who loses her memory from the fall, ends up reaching the home of singer Shankar (Mithun Chakraborty), who recognizes her from a qawwali performance she had performed, and falls in love with her. Ganga takes the help of Saraswati (Jayaprada) to take care of his son, and she ends up falling in love with him. The remainder of the movie deals with how Ganga and Jamuna reunite, and the roles played by Saraswati and Shankar, not to forget Ganga's mission to exact revenge on his Thakur uncle.

The overall music director for the film was Anu Malik and the lyricist was Indeevar and Prayaag Raj, The song "Tere dar ko chod chale" was originally sung by Maqbool Ahmed Sabri who was un - credited for the song, and was later re - recorded in the voice of Pankaj udhas [2]

Lal Baadshah is a 1999 Indian Hindi crime drama film directed by K. C. Bokadia, starring Amitabh Bachchan in a dual role, Raghuvaran, Manisha Koirala, Shilpa Shetty and Amrish Puri. Nirupa Roy also appears in her last film playing Bachchan's foster mother. This was released in the declining period of Bachchan's career and failed at the box office. However, owing to charisma of Bachchan, who brilliantly played a Bihari speaking hero, the movie was a hit in Eastern U.P. and Bihar.

Shahenshah is a 1988 Indian Hindi-language vigilante action film starring Amitabh Bachchan in the title role, along with Meenakshi Sheshadri. The film was produced and directed by Tinnu Anand. The story of the film was written by Amitabh Bachchan's wife Jaya Bachchan and the screenplay was written by veteran screenwriter Inder Raj Anand, who died before the film was released. The film marked Bachchan's comeback to films after a three-year hiatus during which he had entered politics. Bachchan still had films releasing during the hiatus, as they were projects he had previously completed. The film became the second highest grossing film of 1988. It is remembered for the famous dialogue "Rishtey mein toh hum tumhare baap lagte hai...naam hai Shahenshah". The film is also remembered for Bachchan's performance as a comic policeman and a crimefighting superhero. Meenakshi Sheshadri performance as the leading lady was also appreciated. The advance booking shattered all the records and in Shiela Cinema (Delhi) a crowd of 20,000 people had gathered for the first show. 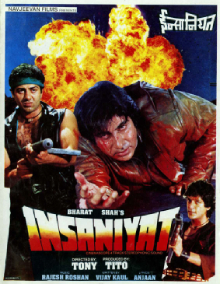 Hero is a 1983 Indian Hindi-language romantic action film directed by Subhash Ghai. Jackie Shroff, also known as "Jackie" played the lead role, and achieved stardom through this film. Actress Meenakshi Sheshadri, who had been crowned Miss India in 1981 and played the lead female role gained popularity through this movie.Music by Laxmikant Pyarelal and songs are still popular. 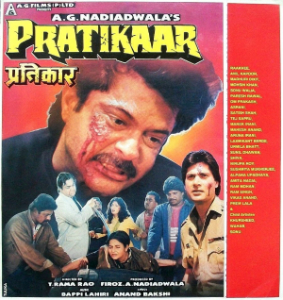 Pratikar is a 1991 Indian Hindi-language action drama film directed by Tatineni Rama Rao with Anil Kapoor and Madhuri Dixit playing the lead roles. The film is a remake of 1987 Bengali film Pratikar which was also remade in Telugu as Raktha Tilakam and in Tamil as Thaimel Aanai.