Gary Kroner was a player in the American Football League for the Denver Broncos from 1965 to 1967. He played at the collegiate level at the University of Wisconsin–Madison.

Gary Johnson is the former Governor of New Mexico and candidate for U.S. president in 2012 and 2016.

Gary Nedrow Bender is a retired American sportscaster and 2008 inductee into the Kansas Sports Hall of Fame. He officially retired, April 13, 2011, from Fox Sports Arizona after 18 years calling the NBA's Phoenix Suns games.

Gustave Kenneth Tebell was an American football, basketball, and baseball player, coach, and college athletics administrator. From 1925 to 1929, he coached football at North Carolina State University, where he compiled a 21–25–2 record. From 1934 to 1936, he coached at the University of Virginia, where he compiled a 6–18–4 record. From 1930 to 1951, he served as the head men's basketball coach at Virginia, achieving his first championship in just his second year. During that tenure, he compiled a 240–190 record, including a NIT berth in 1941. His 240 wins rank fourth in school history. In 1951 he became Athletic Director. Tebell also coached baseball at Virginia from 1941 to 1943 and from 1945 to 1955.

Gary Tobius Ellerson is a former American football player with the University of Wisconsin–Madison, the Green Bay Packers and the Detroit Lions. He currently works as a sports-talk radio host on WSSP in Milwaukee, Wisconsin, as part of The Big Show.

The Minnesota–Wisconsin football rivalry is an American college football rivalry between the Minnesota Golden Gophers and Wisconsin Badgers. It is the most-played rivalry in the NCAA Division I Football Bowl Subdivision, with 130 meetings between the two teams. The winner of the game receives Paul Bunyan's Axe, a tradition that started in 1948 after the first trophy, the Slab of Bacon, disappeared after the 1943 game when the Badgers were meant to turn it over to the Golden Gophers. Minnesota and Wisconsin first played in 1890 and have met every year since, except for 1906. Wisconsin leads the series 62–60–8 through 2020. Wisconsin took the series lead for the first time after defeating Minnesota 31–0 in the 2017 game; Minnesota had led the overall series since 1902, at times by as many as 20 games.

The 1963 Rose Bowl was the 49th edition of the college football bowl game, played at the Rose Bowl in Pasadena, California on Tuesday, January 1, at the end of the 1962 season. The top-ranked USC Trojans defeated the Wisconsin Badgers, 42–37. This was the first #1 versus #2 match-up in a bowl game, although #1 versus #2 match-ups had occurred previously as regular season games. The quarterbacks, Ron Vander Kelen of Wisconsin and Pete Beathard of USC, were named co-Players of the Game.

Gary Lee Andersen is an American football coach who was most recently head football coach at Utah State University. Andersen has also been the head football coach of Southern Utah (2003), Wisconsin (2013–2014), and Oregon State (2015–2017). He served three years as the defensive coordinator at Utah, where he coached the 2008 Utes team that went undefeated and beat Alabama in the Sugar Bowl to finish the season ranked second in the nation.

The 1996 Northwestern Wildcats football team represented Northwestern University in the 1996 NCAA Division I-A college football season. Under head coach Gary Barnett, Northwestern finished the season with a 9–3 record. The Wildcats won a share of the Big Ten Conference title for the second straight year. They faced off against Tennessee in the Florida Citrus Bowl, where the Wildcats lost, 48–28.

The 1962 USC Trojans football team represented the University of Southern California (USC) in the 1962 NCAA University Division football season. In their third year under head coach John McKay, the Trojans compiled an 11–0 record, won the Athletic Association of Western Universities championship, defeated Wisconsin in the 1963 Rose Bowl, outscored their opponents by a combined total of 261 to 92, and finished the season ranked #1 in both the AP Poll and UPI Coaches Poll. 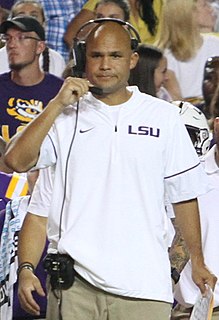 David Christopher Aranda is an American football coach who is currently the head coach at Baylor University. He previously served as the defensive coordinator at LSU, Wisconsin, Utah State, Hawaii, Delta State, and Cal Lutheran.

The 2015 Outback Bowl was an American college football bowl game that was played on 1 January 2015 at Raymond James Stadium in Tampa, Florida. It was the 29th edition of the Outback Bowl and featured the #17 Wisconsin Badgers from the Big Ten and the #19 Auburn Tigers from the SEC. It was one of the 2014-15 bowl games that concluded the 2014 FBS football season. It kicked off at Noon EST and was nationally televised by ESPN2. It was sponsored by the Outback Steakhouse restaurant franchise.