Gould Electronics Inc. was a manufacturer of electronics and batteries that branched into other fields before being partially absorbed in 1988 by Nippon Mining (now JX Holdings) and closed by them in 2014.

Gould was founded in 1928 and at some point was based in Chandler, Arizona. Some time in the 1950s or beyond it became involved in the semiconductor industry, making printed circuit materials for use by electronics manufacturers. Having acquired Systems Engineering Laboratories Gould became involved in the Superminicomputer computer business.

From 1977 to the mid-1980s the company owned the Modicon brand of programmable logic controller, today owned by Schneider Electric. This was in a phase where the company became a mini-conglomerate, with a diverse portfolio of industrial interests. In 1985, Gould, Inc. employed 21,000 worldwide and had sales of 1.4 billion, most of which came from its electrical and electronics products and components, and its defense systems. [1]

Gould's non-defense businesses were acquired in 1988 by Nippon Mining (now JX Holdings). As part of the U.S. government approval of the 1988 deal, Nippon Mining was required to divest the Gould divisions then doing work for the Department of Defense, including the Computer Systems Division. [2] Later, in 1989, Encore Computer Corporation (about 250 employees) bought the computer division (about 2500 employees) from Nippon Mining.

At some point it became headquartered in Eichstetten, Germany.

In July 2014, Gould's then current corporate parent, JX Nippon Mining & Metals Corporation (a part of JX Holdings), announced that it would be closing down the company as a part of JX Nippon Metals & Mining's restructuring, involving closing down several facilities in Japan, the Philippines, and in Germany, where Gould was headquartered. The restructuring was in response to, according to their press release about Gould's closure, "a shrinking market in Europe, high overcapacity and an ongoing erosion of prices, partly triggered by subsidized manufacturers from China and other Asian countries." [3]

Gould is the current owner of a lead-contaminated parcel of land in Throop, Pennsylvania, which it bought in the early 1980s from the former Marjol Battery and Equipment Company.[ citation needed ] 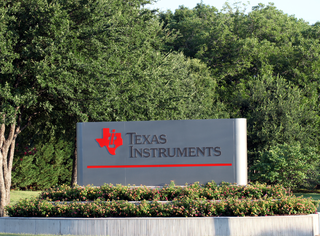 Texas Instruments Incorporated (TI) is an American technology company headquartered in Dallas, Texas, that designs and manufactures semiconductors and various integrated circuits, which it sells to electronics designers and manufacturers globally. It is one of the top 10 semiconductor companies worldwide based on sales volume. The company's focus is on developing analog chips and embedded processors, which account for more than 80% of its revenue. TI also produces TI digital light processing technology and education technology products including calculators, microcontrollers and multi-core processors. The company holds 45,000 patents worldwide as of 2016. 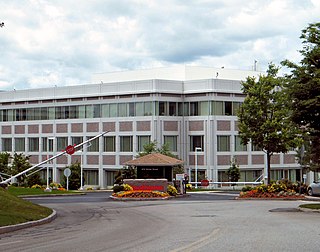 The Raytheon Company was a major U.S. defense contractor and industrial corporation with core manufacturing concentrations in weapons and military and commercial electronics. It was previously involved in corporate and special-mission aircraft until early 2007. Raytheon was the world's largest producer of guided missiles. In April 2020, the company merged with United Technologies Corporation to form Raytheon Technologies.

Energizer Holdings, Inc. is an American manufacturer and one of the world's largest manufacturers of batteries, headquartered in St. Louis, Missouri. It produces batteries under the Energizer, Ray-O-Vac, Varta, and Eveready brand names, and formerly owned a number of personal care businesses until it separated that side of the business into a new company called Edgewell Personal Care in 2015.

Racal Electronics plc was a British electronics company, founded in 1950. 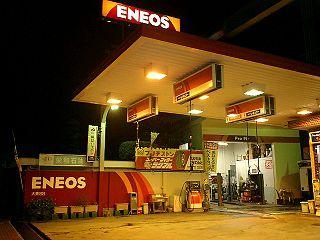 Sanmina Corporation is an American electronics manufacturing services (EMS) provider headquartered in San Jose, California that serves original equipment manufacturers in communications and computer hardware fields. The firm has nearly 80 manufacturing sites, and is one of the world’s largest independent manufacturers of printed circuit boards and backplanes. As of 2018, it is ranked number 411 in the Fortune 500 list, and has been included in the list for the 18th year.

Meggitt plc is a British international company specialising in components and sub-systems for the aerospace, defence and selected energy markets. It is listed on the London Stock Exchange and is a constituent of the FTSE 250 Index.

UK Coal Production Ltd, formerly UK Coal plc, was the largest coal mining business in the United Kingdom. The company was based in Harworth, in Nottinghamshire. The company was a constituent of the FTSE 250 Index. The successor company that contains the former property division, Harworth Group, is still listed on the London Stock Exchange.

Encore Computer was an early pioneer in the parallel computing market, based in Marlborough, Massachusetts. Although offering a number of system designs beginning in 1985, they were never as well known as other companies in this field such as Pyramid Technology, Alliant, and the most similar systems Sequent and FLEX.

Videoton, or officially VIDEOTON HOLDING Ltd. is a private, Hungarian owned company group. It is based in Székesfehérvár, Hungary and offers contract manufacturing and production-related services to industrial companies. Its main profile is electronics manufacturing service. It ranks 32nd globally and 4th in EU according to the 2019 EMS-ranking of Manufacturing Market Insider magazine. The estimated value of the group is 527 million Euro according to the 2019 survey of Forbes. The company has 11 locations, 9 in Hungary, 1 in Bulgaria and 1 in Serbia.

EaglePicher Technologies is a privately held, American, manufacturing company known for its battery technology, energetic devices and battery management systems. The company started in 1842 as the White Lead Company in Cincinnati, Ohio. A merger with the Picher Lead Company of Joplin, MO occurred in 1906, becoming Eagle–Picher Lead, which evolved into Eagle–Picher Industries, Inc. and finally EaglePicher Technologies. With its merger with the lead mining company owned by Oliver Picher, it was the second largest producer of lead and zinc products in the world. The company has provided lithium-ion batteries to military aircraft and high altitude unmanned aerial vehicles. EaglePicher also developed the first human-implantable lithium-ion battery. The company has nine North American manufacturing and research and development sites and over 900 employees. 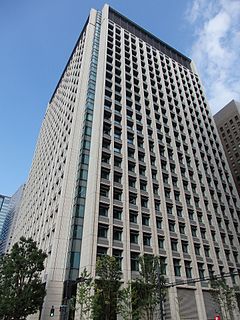 ENEOS Holdings, Inc. (ENEOSホールディングス株式会社) is a Japanese petroleum and metals conglomerate headquartered in Tokyo, Japan. In 2012 the multinational corporation consisted of 24,691 employees worldwide and, as of March 2013, JX Holdings was the forty-third largest company in the world by revenue. It is one of the core companies of the Mitsubishi Group through its predecessor 's merger with Mitsubishi Oil.

Raytheon Technologies Corporation is an American multinational aerospace and defense conglomerate headquartered in Waltham, Massachusetts. It is one of the largest aerospace, intelligence services providers, and defense manufacturers in the world by revenue and market capitalization. Raytheon Technologies (RTX) researches, develops, and manufactures advanced technology products in the aerospace and defense industry, including aircraft engines, avionics, aerostructures, cybersecurity, guided missiles, air defense systems, satellites, and drones. The company is also a large military contractor, getting a significant portion of its revenue from the U.S. government.