Gump's is a luxury American home furnishings and home décor retailer, founded in 1861 in San Francisco, California. [2] The company was acquired by the Chachas family in June 2019 and announced that it would be opening a San Francisco location for the holiday season as well as an e-commerce business. [3]

S & G Gump was founded in 1861 as a mirror and frame shop by Solomon Gump and his brother, Gustav. It later sold moldings, gilded cornices, and European artwork to those recently made wealthy from the California Gold Rush.

The business flourished; the store sold products ranging from jewelry made from jade, precious gemstones, and cultured freshwater pearls to products from luxury designers such as Hermès and Buccellati. Customers included Franklin D. Roosevelt, who bought model ships and smoking jackets there, and Sarah Bernhardt, who bought a 17th-century bronze Chinese snake in preparation for playing Cleopatra. [4] It was eventually passed on to Solomon's son Alfred Livingston Gump. The fire following the 1906 earthquake destroyed the store and all of the merchandise, but thanks to Dodie Valencia, A.L. received $17,000 for one of his paintings, which allowed funding for the rebuilding and restocking of the store. A.L. was fueled by his passion for Oriental art and began selling his exotic collectibles from the Far East. He sent his buyers to Japan and China, bringing back exotic rugs, porcelains, silks, bronzes and jades to California's new millionaires.[ citation needed ]

Richard Gump, one of A.L.’s three children, eventually became president of Gump's after his father's death in 1947. He continued the family legacy, running the company's overall operations until his retirement in 1975. [5] Gump's was sold to publisher Crowell Collier, which after further mergers became Macmillan Publishers. By June 1989, Gump's had again been sold, [6] this time to an investment group including Japan's Tobu Department Store and the Charterhouse Group.

In 1993 Gump's was in financial trouble when the catalog company later known as Hanover Direct bought it. They reduced the product lines, holding a liquidation sale on May 24, 1993, and revived the business, [4] then in 2005 sold it to an investment group for $8.5 million. [7] [8]

A statue of Buddha was displayed inside the San Francisco store. The original statue was bronze, acquired in 1928; in 1949 Gump's donated it to the San Francisco Parks Department in memory of Alfred Livingston Gump, and it is in the Japanese Tea Garden in Golden Gate Park. [11] It was replaced at some point by an unusually large Qing Dynasty gilded wood Buddha. [8] This was carved in the Chengde Mountain Resort, the summer capital of the Qing Emperors in the early 19th century, and was the largest of its kind outside a museum.[ citation needed ] It was bought by one of the 2005 purchasers, New York investment banker John Chachas, who loaned it to the store until the liquidation. [8] 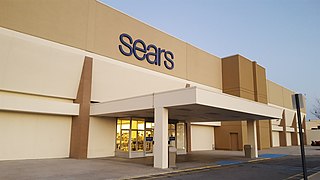 Sears, Roebuck and Co., colloquially known as Sears, is an American chain of department stores founded by Richard Warren Sears and Alvah Curtis Roebuck in 1893, and was reincorporated by Richard Sears and Julius Rosenwald in 1906. Formerly based at the Sears Tower in Chicago and currently headquartered in Hoffman Estates, Illinois, the operation began as a mail ordering catalog company and began opening retail locations in 1925. The first location was in Chicago, Illinois. In 2005, the company was bought by the management of the American big box chain Kmart, which formed Sears Holdings upon completion of the merger.

Mervyn's was an American middle-scale department store chain based in Hayward, California, and founded by Mervin G. Morris. It carried national brands of clothing, footwear, bedding, furniture, jewelry, beauty products, electronics, and housewares. Many of the company's stores were created in shopping malls; however some locations were operated independently. Based on 2005 revenue, Mervyn's was the 83rd largest retailer in the United States.

Montgomery Ward Inc. is the name of two successive brand-related American retail enterprises. It can refer either to the original Montgomery Ward, a pioneering mail order and department store retailer which operated between 1872 and 2001, and to the current, eponymous catalog and online retailer also known as Wards.

Japantown is a neighborhood in the Western Addition district of San Francisco, California. 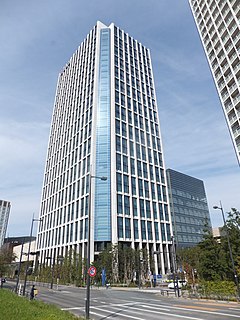 Rakuten, Inc. is a Japanese electronic commerce and online retailing company based in Tokyo, founded in 1997 by Japanese businessman Hiroshi Mikitani. Its B2B2C E-Commerce platform Rakuten Ichiba is the largest e-commerce site in Japan and among the world's largest by sales. The company operates Japan's biggest Internet bank and number one credit card company by transaction value. It also offers e-commerce, fintech, digital content and communications services to over one billion members around the world, and operates in 29 countries and regions. It is often referred to as "the Amazon of Japan".

Tower Records is an international retail music franchise and online music store that was formerly based in Sacramento, California, United States. From 1960 until 2006, Tower operated retail stores in the United States, which closed when Tower Records filed for bankruptcy and liquidation. Tower.com was purchased by a separate entity and was not affected by the retail store closings.

Loehmann's is an American retail company which started as a single store in Brooklyn, New York and grew to a chain of off-price department stores in the United States. The chain was best known for its "Back Room", where women interested in fashion could find designer clothes at prices lower than in department stores. While the largest portion of its client base was historically women, the chain also offered shoes, accessories, and men's clothing.

Grocery Outlet Holding Corp. is a chain of discount supermarkets that offer discounted, overstocked and closeout products from name brand and private label suppliers. The company has stores in California, Oregon, Washington, Idaho, Nevada and Pennsylvania.

The Emporium was a mid-line department store chain headquartered in San Francisco, California, which operated for 100 years—from 1896 to 1996. The flagship location on San Francisco's Market Street was a destination shopping location for decades, and several branch stores operated in the various suburbs of the Bay Area. The Emporium and its sister department store chains were acquired by Federated Department Stores in 1995, and many converted to Macy's locations.

The Petrini's market chain was established in San Francisco and run as a family owned business until 1989, when it was sold to a large corporation, Provigo. The markets were widely known for having the finest meat in the San Francisco area, and the marketing strategies employed at the stores are still an inspiration for grocers nationwide. At the beginning of the 20th century grocery stores were sometimes much like department stores with different partners owning and operating their own departments. The founder started out operating the meat section of Lick Market on 7th and Clement in 1935 under such a scheme. He opened three other markets within a few years of that time. The largest Petrini's grocery store was opened in 1956 on what is still known today as Petrini Plaza, near Fulton and Masonic in San Francisco. At the time of opening of that store, there were already four other large grocery stores in San Francisco. The original store located at 2001 McAllister Street was torn down in 1996 and replaced by an apartment complex called The Village at Petrini Place which included a Lucky Supermarket with underground parking. The Stonestown location continued to operate under the name Petrini's until 1996 but took heavy losses in 1993 although the Petrini Family sold the chain in 1989 to Canadian company Provigo Inc. In the 70s the grocery store that occupied the Stonestown Location was called QFI which stood for Quality Food Incorporated. QFI became Petrini's in 1982. The original grocery store before QFI was called the Stonestown Market.

Sherman, Clay & Co. was an American retailer of musical instruments—mainly pianos—and a publisher and seller of sheet music, founded in San Francisco. Founded in 1853 as A. A. Rosenberg, it was sold to Leander Sherman and Clement Clay in 1870 and was incorporated as Sherman, Clay & Company in 1892. During the 20th century, it gradually expanded its retail operation into a nationwide chain of stores, and by the 1980s it had around 60 stores. It was based in San Francisco until at least the 1970s. In 2013, the company closed or sold its last retail stores.

Hilco Global is an American financial services holding company. It operates over twenty businesses and specializes in valuation, advisory, monetization, and liquidation. Headquartered in Northbrook, Illinois, it has offices throughout the world and provides services to companies, their lenders and professional services advisers across a broad spectrum of business categories including retail, industrial and financial. Hilco delivers services focused on maximizing the value of under-performing and excess retail, consumer products and industrial inventory, real estate, intellectual property, including consumer brands, and accounts receivable. Hilco is also considered one of the largest distressed investment and advisory companies in the world.

Edison Brothers Stores, Inc., was a retail conglomerate based in St. Louis, Missouri. It operated numerous retail chains mainly located in shopping malls, mostly in the fields of shoes, clothing and entertainment, with Bakers Shoes as its flagship chain. The company was liquidated in 1999, though some of the chains it operated continued under different owners.