Hanaboy is a two-member J-Pop band under Nippon Crown Records label. The band was established in January 2003 by Miwako (Vocals & Piano) and Kentaro (Drums). The band released two albums and one single under the independent record label Hills Records before making their major record debut through Nippon Crown Records by releasing their mini-album, The South Pole. Bassist Macoto joined the band in 2005 but left under mutual agreement in November 2007. [1] Drummer Kentaro followed suit by leaving the band in May 2008 to pursue other musical interests. [2]

Nippon Crown Co., Ltd. is a Japanese record label established as Crown Records on 6 September 1963. It is a spin-off of Nippon Columbia and is owned by karaoke maker Daiichikosho. The record label singles which topped the Oricon Singles Chart are Kaze's "22-Sai no Wakare" (1975), and Gackt's "Returner " (2007).

The song "The Brand New Morning", featured on their album Beausicle , has been used for a television commercial for Yakult. [3] In 2006 the band performed live at the Shibuya duo music exchange. [4] 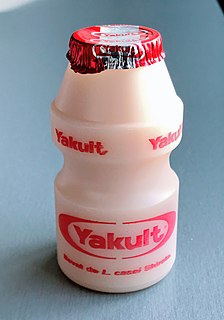 Yakult is a sweetened probiotic milk beverage fermented with the bacteria strain Lactobacillus paracasei Shirota, first isolated from the human intestine by Japanese scientist Minoru Shirota in the 1930s. It is sold by Yakult Honsha, based in Tokyo. It comes in single-serve 65 millilitres containers, often in single-row six packs. 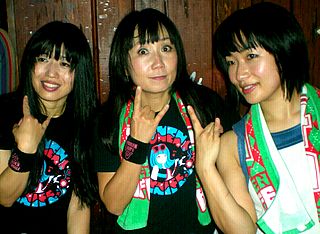 Shonen Knife is a Japanese pop punk band formed in Osaka, in 1981. Heavily influenced by 1960s girl groups, pop bands, The Beach Boys, and early punk rock bands, such as the Ramones, the trio crafts stripped-down songs with simplistic lyrics sung both in Japanese and English.

Zard was a Japanese pop rock group. Originally a group of five members, with lead vocalist Izumi Sakai as group leader. However, Sakai was the only member who stayed on in the group while others joined and left regularly. As such, Zard and Sakai may be referred to interchangeably. Zard's work was sold under the record label B-Gram Records, Inc. Their most popular and successful songs are "Makenaide" (1993) (負けないで), "Yureru Omoi" (1993) (揺れる想い), and "My Friend" (1996). As of 2014, Zard has sold over 37 million records, making them one of the best-selling music artists in Japan. 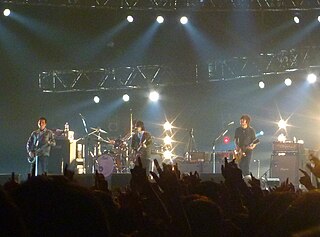 Asian Kung-Fu Generation is a Japanese alternative rock band formed in Yokohama, Japan, in 1996. For nearly its entire career, the band has consisted of vocalist Masafumi Gotoh, guitarist Kensuke Kita, bassist Takahiro Yamada, and drummer Kiyoshi Ijichi. Starting out as a college band, Asian Kung-Fu Generation released a series of independent EPs featuring lyrics mostly sung in English. In 2002, they released their major-label EP debut Hōkai Amplifier, from that point singing their lyrics in Japanese. The band's musical style is influenced by seminal Western alternative rock acts as well as their own local Japanese indie-rock and punk scene. Their songs incorporate various aspects of the genres, most typically expressing fast tempos and prominent power chord guitar riffs in addition to rhythmic groove and emotional lyrics. Despite the indie nature of their music, the band has enjoyed worldwide commercial success in addition to critical acclaim. Asian Kung-Fu Generation has been cited as one of the best, most balanced modern rock bands to emerge from Japan in the 2000s.

Aiko Yanai, known by her stage name Aiko, is a Japanese pop singer and songwriter.

CAVE Interactive CO., LTD., or CAVE for short, is a Japanese video game company founded in 1994 by former employees of Toaplan following its bankruptcy. They are known primarily for their "bullet hell" shoot 'em ups; from 1995 up to 2013, CAVE was one of the most prolific shoot 'em up developers in the Japanese market. Alongside this, CAVE has produced a variety of other types games for arcades, home consoles, PCs, and smartphones, also dating back to 1995. 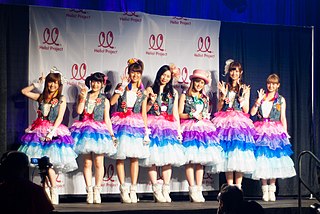 Berryz Kobo was a Japanese idol girl group. The pop group was part of Hello! Project, produced by Tsunku, who also wrote their songs. Of all the musical acts in Hello! Project, Berryz held the title of the most consistent line-up, having kept all of their original members since their one and only graduation in 2005. 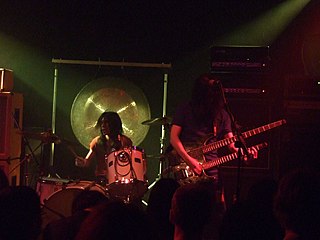 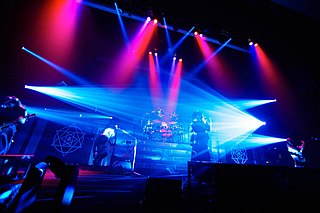 Marvelous Entertainment Inc. (MMV) is a multinational corporation that produces animation, music, video games and television series. MMV is known for its involvement in the Story of Seasons series.

Clannad is a visual novel developed by Key and published by VisualArt's in 2004. The story follows Tomoya Okazaki, a discontented high school student whose life changes when he meets a girl one year older than him named Nagisa Furukawa. It was adapted by Toei Animation into an animated film in 2007 directed by Osamu Dezaki with music direction by Yoshichika Inomata. Kyoto Animation also adapted it into two anime television series consisting of 49 episodes broadcast between 2007 and 2009, including two original video animation episodes released in 2008 and 2009, directed by Tatsuya Ishihara with music direction by Shinji Orito. The discography of Clannad and its anime adaptations consists of two studio albums, four singles, two soundtracks, and four remix albums. 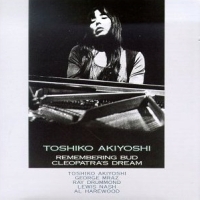 Remembering Bud: Cleopatra's Dream is a jazz trio album recorded by pianist Toshiko Akiyoshi in 1990 as a tribute to jazz pianist Bud Powell and released on the Nippon Crown record label in Japan and on the Evidence label in the USA.

Since her debut recording for Norgran Records in 1954, jazz pianist, composer, arranger and big band leader Toshiko Akiyoshi has recorded continuously – almost exclusively as a leader of small jazz combos and of her big bands – averaging one studio album release per year for well over 50 years. She has also recorded several live albums in solo, small combo and big band settings, including three big band concert videos. Akiyoshi has released multiple albums for Victor / BMG, Nippon Columbia, Toshiba, Discomate, Nippon Crown and other labels in Japan and for Norgran / Verve, RCA, Columbia / Sony, Concord and her own Ascent label in the US. All of her big band recordings and nearly all of her other early works have been re-issued on CDs over the years. 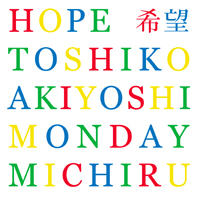 Hope is a CD single by jazz pianist Toshiko Akiyoshi and singer Monday Michiru released in Japan on the Nippon Crown Record label. The instrumental version of the song "Hope" is from the 2006 Akiyoshi album of the same name. The composition "Hope" is the closing section of Akiyoshi's "Hiroshima: Rising from the Abyss" suite, first introduced on the 2001 Toshiko Akiyoshi Jazz Orchestra album, Hiroshima - Rising From The Abyss. 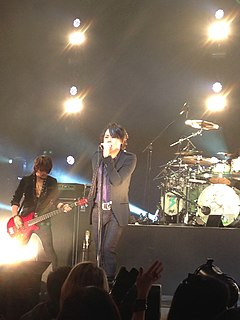 Ryuichi Kawamura is a Japanese musician, singer, songwriter, composer, record producer, actor, author and race car driver. He is best known as lead singer of the rock band Luna Sea. After the band disbanded in 2000, Kawamura continued his successful solo career. In 2005 he formed Tourbillon with fellow Luna Sea member Inoran and Hiroaki Hayama. He has recently rejoined Luna Sea, as they reunited in August 2010.

Maya Bond is a Japanese-born American singer and musician. She is the daughter of musician and composer T.W. Bond. 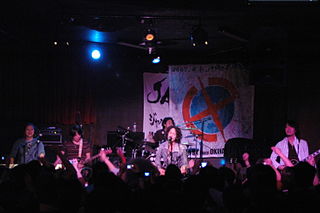 HY is a Japanese rock band formed in 2000 by five high school friends from Okinawa. Their name comes from the initials of their hometown, Higashi Yakena. The band's popularity rose rapidly after a series of street performances; their debut album, Departure, released on 22 September 2001 (Okinawa-only), sold out immediately. In 2003, the band conducted a joint live performance with Linkin Park.

Haruka Katayama, is a Japanese actress and tarento who is a former member of the idol group AKB48's team A produced by Yasushi Akimoto. She debuted in 2007 with team B, joined team A in 2010, and returned to team B in 2012.

Frederic (フレデリック) is a Japanese rock band from Kobe formed in 2009. The band is signed to A-Sketch Music Label and has, as of 2015, released 4 EPs and multiple singles. In 2015, Frederic won the Kansai block local award at the 7th CD Shop Awards for their album oddloop. This album was released on September 24, 2014 and was also their debut at a major record label. 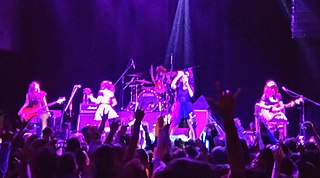 Band-Maid, stylized as BAND-MAID and formerly as BAND-MAID®, is a Japanese rock band formed in 2013. The band combines a rock sound with a maid image modeled on Japanese maid cafés. Originally signed to Gump Records, they switched to major label Nippon Crown's sub-label Crown Stones in 2016 and later moved to new sub-label Revolver Records in 2019.