Last updated July 24, 2021
Part of the guitar which houses the pegs
This article is about part of a stringed instrument. For motorized chuck component, see lathe. For other uses, see Headstock (disambiguation).

A headstock or peghead is part of a guitar or similar stringed instruments such as a lute, mandolin, banjo, ukulele and others of the lute lineage. The main function of a headstock is to house the pegs or mechanism that holds the strings at the "head" of the instrument. At the "tail" of the instrument the strings are usually held by a tailpiece or bridge. Machine heads on the headstock are commonly used to tune the instrument by adjusting the tension of strings and, consequentially, the pitch of sound they produce.

Two traditional layouts of guitar tuners are called "3+3" (3 top tuners and 3 bottom ones) and "6 in line" tuners, though many other combinations are known, especially for bass guitars and non-6-string guitars. When there are no machine heads (i.e. tuners are not needed or located in some other place, for example, on guitar body), the guitar headstock may be missing completely, as in Steinberger guitar or some Chapman stick models.

The headstock may be carved separately and glued to the neck using some sort of joint (such as a scarf joint). There are two major trends in headstock construction, based on how the string will go after passing the nut. The advantages and disadvantages of both trends are very debatable and subjective, so these two variants are used:

Luthiers of both styles frequently cite better sound, longer sustain and strings staying in tune longer as advantages of each style. Fragile construction is cited as a disadvantage of each style too: single-piece necks are more likely to break on occasional hit and are harder to repair, while glued-in necks can break with time.

Apart from its main function, the headstock is an important decorative detail of a guitar. It is the place where overwhelming majority of guitar manufacturers draw their logo. Some guitars without machine heads (for example, ones equipped with Floyd Rose SpeedLoader) have a headstock for purely decorative reasons.

Most major guitar brands have signature headstock designs that make their guitars or guitar series easily recognizable. As seen in a section below, even "copied" at the first glance designs retain clear visible changes in dimensions, proportions of elements, etc., so it is almost always possible to tell a major brand of a guitar by looking at headstock.

On some electric guitars and basses the finish used on the body is also applied to the face of the headstock. Generally, matched-headstock models carry a price premium over their plain counterparts due to the extra processes involved in the finishing process.

The definition of a "matched headstock" varies between manufacturers and players - for example, the headstocks of Gibson guitars are nearly always black, and it is debatable whether a black-bodied Gibson has a matching headstock. Generally, a guitar is only considered to have a matching headstock if the guitar is usually produced without matching body and headstock finishes. 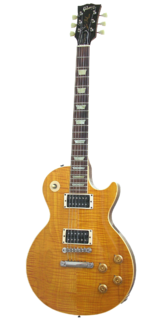 The Gibson Les Paul is a solid body electric guitar that was first sold by the Gibson Guitar Corporation in 1952. The guitar was designed by factory manager John Huis and their team with input from and endorsement by guitarist Les Paul. Its typical design features a solid mahogany body with a carved maple top and a single cutaway, a mahogany set-in neck with a rosewood fretboard, two pickups with independent volume and tone controls, and a stoptail bridge, although variants exist. 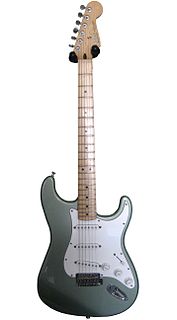 The Fender Musical Instruments Corporation is an American manufacturer of stringed instruments and amplifiers. Fender produces acoustic guitars, bass amplifiers and public address equipment, but is best known for its solid-body electric guitars and bass guitars, particularly the Stratocaster, Telecaster, Jazzmaster, Precision Bass, and the Jazz Bass. The company was founded in Fullerton, California by Clarence Leonidas "Leo" Fender in 1946. Its headquarters are in Los Angeles, California. 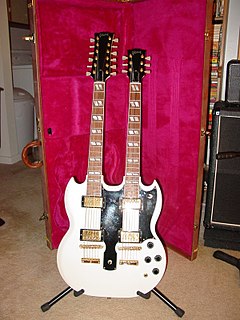 The Gibson EDS-1275 is a doubleneck Gibson electric guitar, weighing about 13 pounds (5.9 kg) and introduced in 1963. Popularized by both rock and jazz musicians such as Don Felder, Jimmy Page, Alex Lifeson, Steve Miller, Steve Clark, and John McLaughlin, it was named "the coolest guitar in rock" by the website Gigwise. 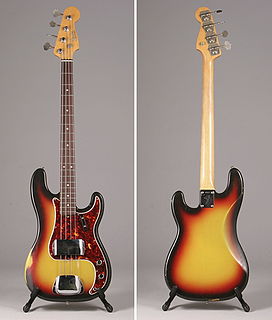 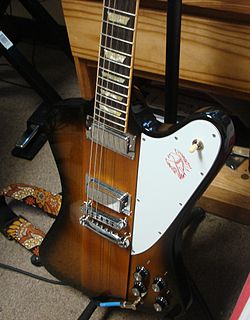 The Gibson Firebird is a solid-body electric guitar manufactured by Gibson from 1963 to the present.

The Fender Coronado is a double-cutaway thin-line hollow-body electric guitar, announced in 1965. It is manufactured by Fender Musical Instruments Corporation. The aesthetic design embodied in the Coronado represents a departure from previous Fender instruments; the design remains an uncharacteristic piece of Fender history. 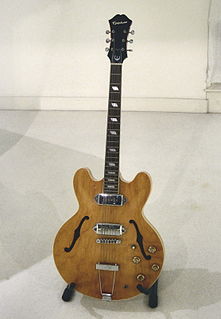 The Fender American Deluxe Series was a line of electric guitars and basses introduced by Fender in 1995 and discontinued in 2016. It was upgraded in 2004 and 2010 before being replaced by the American Elite series in 2016. 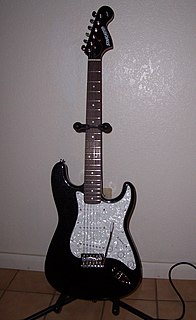 Starcaster by Fender is a range of instruments and accessories aimed at students and beginners, marketed by the prominent guitar company Fender from the early 2000s until at least 2011. As of April 2018, no products were being marketed under this brand.