"Hector the Hero" is a classic lament penned by Scottish composer and fiddler James Scott Skinner in 1903. It was written as a tribute to Major-General Hector MacDonald, a distinguished Scottish general around the turn of the century. MacDonald, a friend of Skinner's, had not long before committed suicide following accusations of having sexual relations with teenage boys.

As it is a lament, it is played slowly and sadly, often using instruments such as the violin, piano, guitar or bagpipes. It has been covered by many artists since its release, and is still reasonably well known today.

As it was written in 1903, the lyrics, by Thomas McWilliam, and music to "Hector the Hero" have passed into the public domain.

Lament him, ye mountains of Ross-shire;
Your tears be the dew and the rain;
Ye forests and straths, let the sobbing winds
Unburden your grief and pain.
Lament him, ye warm-hearted clansmen,
And mourn for a kinsman so true
The pride of the Highlands, the valiant MacDonald
Will never come back to you.

Lament him, ye sons of old Scotia,
Ye kinsmen on many a shore;
A patriot-warrior, fearless of foe,
Has fallen to rise no more.

O cherish his triumph and glory
On Omdurman's death-stricken plain,
His glance like the eagle's, his heart like the lion's
His laurels a nation's gain.

O rest thee, brave heart, in thy slumber,
Forgotten shall ne'er be thy name;
The love and the mercy of Heaven be thine;
Our love thou must ever claim.
To us thou art Hector the Hero,
The chivalrous, dauntless, and true;
The hills and the glens, and the hearts of a nation,
Re-echo the wail for you.

In Greek mythology, Zelus or Zelos was the daimon that personifies dedication, emulation, eager rivalry, envy, jealousy, and zeal. The English word "zeal" is derived from his name.

A pentacle is a talisman that is used in magical evocation, and is usually made of parchment, paper, cloth, or metal, upon which a magical design is drawn. Protective symbols may also be included, a common one being the six-point form of the Seal of Solomon.

A lament or lamentation is a passionate expression of grief, often in music, poetry, or song form. The grief is most often born of regret, or mourning. Laments can also be expressed in a verbal manner, where the participant would lament about something they regret or someone they've lost, usually accompanied by wailing, moaning and/or crying. Laments constitute some of the oldest forms of writing and examples are present across human cultures.

Belshazzar's Feast is a cantata by the English composer William Walton. It was first performed at the Leeds Festival on 8 October 1931, with the baritone Dennis Noble, the London Symphony Orchestra and the Leeds Festival Chorus, conducted by Malcolm Sargent. The work has remained one of Walton's most celebrated compositions. Osbert Sitwell selected the text from the Bible, primarily the Book of Daniel, and Psalm 137. The work is dedicated to Walton's friend and benefactor Lord Berners.

"Wyoming" is the state song of Wyoming. Judge Charles Edwin Winter (1870–1948) wrote the words during the summer of 1903, and Earle R. Clemens (1878–1943) wrote music to it soon thereafter. They copyrighted the song in 1913 and the Wyoming Publishing Company in Casper published it that same year and the song became the unofficial Wyoming state song. Clemens was a newspaper editor for the Grand Encampment Herald, the newspaper of Grand Encampment, Wyoming.

Jephtha is an oratorio (1751) by George Frideric Handel with an English language libretto by the Rev. Thomas Morell, based on the story of Jephtha in Judges and Jephthes sive votum (1554) by George Buchanan. Whilst writing Jephtha, Handel was increasingly troubled by his gradual loss of sight, and this proved to be his last oratorio. In the autograph score, at the end of the chorus "How dark, O Lord, are thy decrees" he wrote "Reached here on 13 February 1751, unable to go on owing to weakening of the sight of my left eye."

Pavle Orlović is a semi-mythological hero of the Kosovo cycle of Serbian epic poetry; he was a Serbian knight, one of the military commanders under Prince Lazar that fell at the Battle of Kosovo (1389) against the Ottoman Empire. According to folklore, Orlović was the son of voivode Vuk Orle, the Lord of Soko Grad on the Drina. After the death of Stephen Uroš V the Weak, Orlović held the mining town of Novo Brdo, as well as his father's possessions on Mount Rudnik in central Serbia.

Duncan MacGregor Crerar was a Scottish poet who spent much of his adult life in western Ontario and New York City, writing sentimental poetry commemorating places and friends in Scotland. A native Gaelic speaker, he wrote primarily in English, with Gaelic phrases and diction. He was referred to by some contemporaries as "The Breadalbane Bard" or "Bard of Amulree". In his book Scottish Poets in America, John D. Ross described him:

In conclusion, we would state that Mr. Crerar is one of the most genial of men, kind, sympathetic, and generous in all his actions. In his own quiet, unobtrusive way, and unknown to the world, he has rendered assistance to many when they found the clouds of adversity hovering over them: and there are few men similarly circumstance who can boast of so large and so sincere a following of friends. 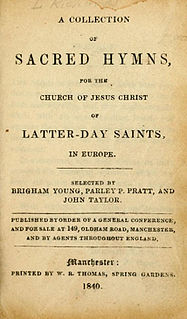 A Collection of Sacred Hymns for the Church of Jesus Christ of Latter-day Saints in Europe, informally known as the Manchester Hymnal, was first published in Manchester, England, in 1840. Like the first Latter Day Saint hymnal, this hymnal is text-only; it went through many editions, lasting until 1912 —future editions supposedly had extra hymns added, but the first few had 271.

Alexander Balus is an oratorio by George Frideric Handel, named after its title character, the Seleucid king Alexander Balas. The work has three acts and was written in English. The period of the story is from 150 B.C to 145 B.C. The libretto is by Thomas Morell after the biblical book of 1 Maccabees.

Coronation Ode, Op. 44 is a work composed by Edward Elgar for soprano, alto, tenor and bass soloists, chorus and orchestra, with words by A. C. Benson.

The Karna Parva, or the Book of Karna, is the eighth of eighteen books of the Indian Epic Mahabharata. Karna Parva traditionally has 96 chapters. The critical edition of Karna Parv has 69 chapters

Psalm 24 is the 24th psalm of the Book of Psalms, generally known in English by its first verse, in the King James Version, "The earth is the LORD's, and the fulness thereof". In the Greek Septuagint version of the Bible and the Latin Vulgate, this psalm is Psalm 23 in a slightly different numbering system. In Latin, it is known as "Domini est terra et plenitudo eius orbis terrarum". The psalm is marked as a Psalm of David.

Psalm 80 is the 80th psalm in the biblical Book of Psalms.

"The Ballad of Cassandra Southwick" is a poem written by American Quaker poet John Greenleaf Whittier in 1843. It details the religious persecution of Cassandra Southwick's youngest daughter Provided Southwick, a Quaker woman who lived in Salem, Massachusetts and is the only white female known to be put up at auction as a slave in the United States.

The Begatting of the President is a satirical album narrated by Orson Welles, summarising the presidency of Lyndon B. Johnson and the election of 1968, leading up to the election of Richard Nixon, delivered in the style of Biblical verse.