Human, All Too Human (TV series)

Human, All Too Human is a three-part 1999 documentary television series co-produced by the BBC and RM Arts. [1] It follows the lives of three prominent European philosophers: Friedrich Nietzsche, Martin Heidegger and Jean-Paul Sartre. [1] The theme revolves heavily around the school of philosophical thought known as Existentialism, although the term had not been coined at the time of Nietzsche's writing and Heidegger declaimed the label. 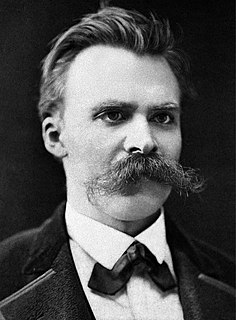 Friedrich Wilhelm Nietzsche was a German philosopher, cultural critic, composer, poet, philologist, and Latin and Greek scholar whose work has exerted a profound influence on modern intellectual history. He began his career as a classical philologist before turning to philosophy. He became the youngest ever to hold the Chair of Classical Philology at the University of Basel in 1869 at the age of 24. Nietzsche resigned in 1879 due to health problems that plagued him most of his life; he completed much of his core writing in the following decade. In 1889 at age 44, he suffered a collapse and afterward, a complete loss of his mental faculties. He lived his remaining years in the care of his mother until her death in 1897 and then with his sister Elisabeth Förster-Nietzsche. Nietzsche died in 1900.

The documentary is named after the 1878 book written by Nietzsche, titled Human, All Too Human: A Book for Free Spirits (in German: Menschliches, Allzumenschliches: Ein Buch für freie Geister). [2]

Human, All Too Human: A Book for Free Spirits is a book by 19th-century philosopher Friedrich Nietzsche, originally published in 1878. A second part, Assorted Opinions and Maxims, was published in 1879, and a third part, The Wanderer and his Shadow, followed in 1880.

Religion is a social-cultural system of designated behaviors and practices, morals, worldviews, texts, sanctified places, prophecies, ethics, or organizations, that relates humanity to supernatural, transcendental, or spiritual elements. However, there is no scholarly consensus over what precisely constitutes a religion.

Nihilism is the philosophical viewpoint that suggests the denial of, or lack of belief in, the reputedly meaningful aspects of life. Most commonly, nihilism is presented in the form of existential nihilism, which argues that life is without objective meaning, purpose, or intrinsic value. Moral nihilists assert that there is no inherent morality, and that accepted moral values are abstractly contrived. Nihilism may also take epistemological, ontological, or metaphysical forms, meaning respectively that, in some aspect, knowledge is not possible, or reality does not actually exist. 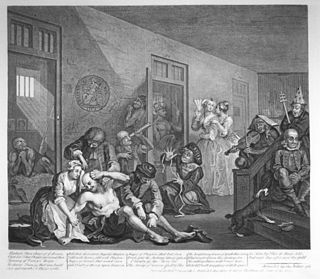 Insanity, madness, and craziness are terms that describe a spectrum of individual and group behaviors that are characterized by certain abnormal mental or behavioral patterns. Insanity can be manifest as violations of societal norms, including a person or persons becoming a danger to themselves or to other people. Conceptually, mental insanity also is associated with the biological phenomenon of contagion as in the case of copycat suicides. In contemporary usage, the term insanity is an informal, un-scientific term denoting "mental instability"; thus, the term insanity defense is the legal definition of mental instability. In medicine, the general term psychosis is used to include the presence either of delusions or of hallucinations or both in a patient; and psychiatric illness is "psychopathology", not mental insanity. 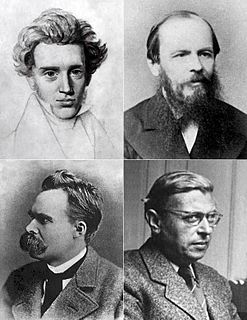 Existentialism is the philosophical study that begins with the human subject—not merely the thinking subject, but the acting, feeling, living human individual. It is associated mainly with certain 19th and 20th-century European philosophers who, despite profound doctrinal differences, shared the belief in that beginning of philosophical thinking. 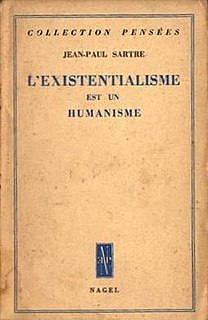 Existentialism Is a Humanism is a 1946 work by the philosopher Jean-Paul Sartre, based on a lecture by the same name he gave at Club Maintenant in Paris, on 29 October 1945. In early translations, Existentialism and Humanism was the title used in the United Kingdom; the work was originally published in the United States as Existentialism, and a later translation employs the original title. The work, once influential and a popular starting-point in discussions of Existentialist thought, has been widely criticized by philosophers, including Sartre himself, who later rejected some of the views he expressed in it. 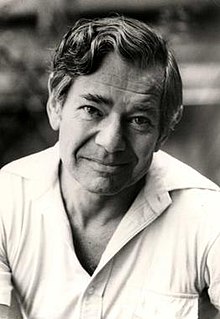 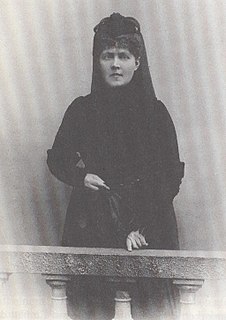 Therese Elisabeth Alexandra Förster-Nietzsche was the sister of philosopher Friedrich Nietzsche and the creator of the Nietzsche Archive in 1894.

The proposition that existence precedes essence is a central claim of existentialism, which reverses the traditional philosophical view that the essence of a thing is more fundamental and immutable than its existence. To existentialists, human beings—through their consciousness—create their own values and determine a meaning for their life because the human being does not possess any inherent identity or value. That identity or value must be created by the individual. By posing the acts that constitute them, they make their existence more significant. 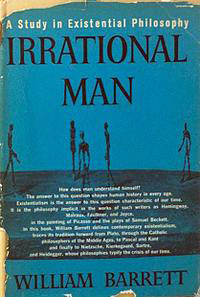 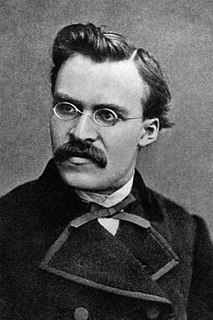 Friedrich Nietzsche's influence and reception varied widely and may be roughly divided into various chronological periods. Reactions were anything but uniform, and proponents of various ideologies attempted to appropriate his work quite early.

Ivan Soll is an American philosopher who is a Professor Emeritus in the Department of Philosophy at the University of Wisconsin–Madison in the United States. He taught at UW from 1965 until his retirement in May 2011. His teaching and research focused on the philosophy of Friedrich Nietzsche, German philosophy in general, existentialism, aesthetics, and various figures of continental philosophy.

Abandonment, in philosophy, refers to the infinite freedom of humanity without the existence of a condemning or omnipotent higher power. Original existentialism explores the liminal experiences of anxiety, death, "the nothing" and nihilism; the rejection of science as an adequate framework for understanding human being; and the introduction of "authenticity" as the norm of self-identity, tied to the project of self-definition through freedom, choice, and commitment. Existential thought bases itself fundamentally in the idea that one's identity is constituted neither by nature nor by culture, since to "exist" is precisely to constitute such an identity. It is from this foundation that one can begin to understand abandonment and forlornness.

Search for a Method or The Problem of Method is a 1957 essay by Jean-Paul Sartre, in which he attempts to reconcile Marxism with existentialism. The first version of the essay was published in the Polish journal Twórczość; an adapted version appeared later that year in Les Temps modernes, and later served as an introduction for Sartre's Critique of Dialectical Reason. Sartre argues that existentialism and Marxism are compatible, even complementary, even though Marxism's materialism and determinism might seem to contradict the abstraction and radical freedom of existentialism. 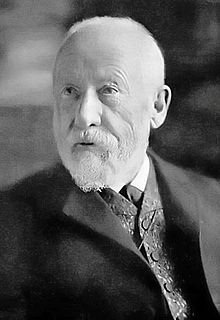 Nietzsche: Philosopher, Psychologist, Antichrist is a book about the German philosopher Friedrich Nietzsche by the philosopher Walter Kaufmann. The book, first published by Princeton University Press, was influential and is considered a classic study. Kaufmann has been credited with helping to transform Nietzsche's reputation after World War II by dissociating him from Nazism, and making it possible for Nietzsche to be taken seriously as a philosopher. However, he has been criticized for presenting Nietzsche as an existentialist, and for other details of his interpretation.

Buddhist thought and Western philosophy include several parallels. Before the 20th century, a few European thinkers such as Arthur Schopenhauer and Friedrich Nietzsche had engaged with Buddhist thought. Likewise, in Asian nations with Buddhist populations, there were also attempts to bring the insights of Western thought to Buddhist philosophy, as can be seen in the rise of Buddhist modernism.