Oscar Ignacio Carrasco Sotelo (born 30 June 1982 in Morelia) is a Mexican football player who last played as a midfielder for Venados F.C. in Ascenso MX. He had previously played for a number of teams in the Mexican second tier after having played for Monarcas Morelia in Liga MX. [1] [2]

The Mexican Football Federation is the governing body of association football in Mexico. It administers the Mexico national team, the Liga MX and all affiliated amateur sectors, and controls promoting, organizing, directing, expanding, and supervising competitive football in Mexico. 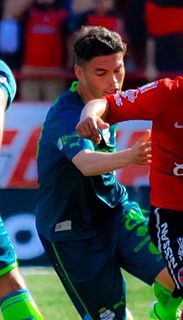 Carlos Adrián Morales Higuera is a former Mexican professional footballer. He last played for Lobos BUAP on loan from Morelia in the Liga MX.

Adrián Aldrete is a Mexican footballer, who plays as a midfielder for Cruz Azul in Liga MX. He was on the Mexico national team that won the FIFA U-17 World Cup in 2005, considered the "Generación Dorada" of Mexico's footballers.

Miguel Angel Fraga Licona is a Mexican football goalkeeper who plays for Liga MX club Mazatlán. Fraga played many years as a backup in Monarcas Morelia to then become the star of Toros Neza after stopping many penalties against 1st division clubs in the Mexican cup. who also was call up for the 2017 gold cup and the 3rd choice goalkeeper. 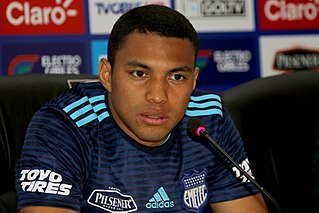 Jefferson Antonio Montero Vite is an Ecuadorian professional footballer who plays as a winger for the Ecuador national team.

Elías Hernán Hernández Jacuinde is a Mexican footballer who plays for Cruz Azul and the Mexico national team.

The Copa MX Apertura 2012 was the 68th staging of the Copa MX football tournament, the 41st staging in the professional era and the first was played since the 1996–97 edition.

Ignacio González Espinoza is a Mexican footballer who currently plays for Correcaminos UAT.

Rodrigo Godínez Orozco is a Mexican footballer who currently plays for Leones Negros.

The 2018–19 Liga MX season was the 72nd professional season of the top-flight football league in Mexico. The season is split into two championships—the Torneo Apertura and the Torneo Clausura—each in an identical format and each contested by the same eighteen teams.

The 2018–19 Club Puebla season is the club's 72nd professional season in Mexico's top-flight football league. The season is split into two tournaments—the Torneo Apertura and the Torneo Clausura—each with identical formats and each contested by the same eighteen teams. The club will also play Copa MX.

The 2019–20 Liga MX season was the 73rd professional season of the top-flight football league in Mexico. The season is divided into two championships—the Torneo Apertura and the Torneo Clausura—each in an identical format and each contested by the same nineteen teams. The Apertura tournament began on 19 July 2019.

Ignacio Martínez is a Mexican former footballer and manager. Martínez played as goalkeeper for La Piedad, Ciudad Madero, Club Universidad Nacional, Celaya and Atlético Morelia. As manager, Martínez spent most of his career at La Piedad. The last team he managed was Jaral del Progreso from the Tercera División in 2017.

Sagir David Arce Chávez, is a Mexican-American footballer who plays as a forward for Monarcas Morelia at the Liga MX.