She is the third daughter of Donald Samarakone (formerly of Ceylon Civil Service) and Srima (née Rathnayake). Samarakone has three sisters Kusum, Sucharitha and Deepthi. [5]

She was educated at Visakha Vidyalaya, Colombo and attended Sri Lanka Law College where she graduated as a lawyer with Honours in 1979. She became an associate member of Sri Lanka Chartered Institute of Management Accountants in 1982. [6]

In 2008 she was appointed as a Sri Lankan High Commissioner to Singapore, where she served as the Head of the Sri Lanka Diplomatic Mission for a period of 3 years. During that time, she played an important role in promoting Ceylon tea, investment, trade, tourism and strengthening the diplomatic relations of Sri Lanka with Singapore. [7] [8] [9] [10]

Foreign relations of Sri Lanka refers to the diplomatic and commercial relations between Sri Lanka and other countries. Sri Lanka has stressed its principle of friendship towards all, enmity towards none in its diplomacy. Sri Lanka traditionally follows a non-aligned foreign policy and does not take sides with major powers.

Ong Keng Yong is a Singaporean diplomat who served as the Secretary-General of the Association of Southeast Asian Nations (ASEAN) from 2003 to 2007, and as Singapore's High Commissioner to Malaysia from 2011 to 2014. Thereafter, he took over from Ambassador Barry Desker and assumed the position of Executive Deputy Chairman of the S. Rajaratnam School of International Studies of Nanyang Technological University.

Visakha Vidyalaya is a girls' school in Colombo, Sri Lanka. It is a National School founded by the central government providing primary and secondary education.

Sir Edwin Aloysius Perera Wijeyeratne, known as Edwin Wijeyeratne, was a Sri Lankan lawyer, politician, diplomat, and one of the founding members of United National Party. He was a Senator and Minister of Home Affairs and Rural Development in the government of D.S.Senanayake.

Ernest Corea was a Sri Lankan journalist and a diplomat noted for his work to maintain a free and independent press and for negotiations involving Sri Lanka's development programs. 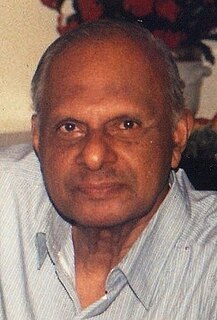 Deshamanya Dr Vernon Loraine Benjamin Mendis was a prominent Sri Lankan diplomat, who served as the United Nations' Special Envoy to the Middle East. He is referred to as the Sri Lanka's Father of Diplomacy due to his role in formation of the country's diplomatic service and has served as Sri Lankan High Commissioner to the United Kingdom, Canada; Ambassador to France, Cuba and Secretary General of the Non Aligned Movement.

Chandrasekera Rohitha Bandara Bogollagama is a Sri Lankan politician and ex Governor of Eastern Province. He was the former Sri Lanka Freedom Party chief organiser for the Kotte Electorate. He had also served as the Cabinet Minister of Foreign Affairs from 28 January 2007 until he was defeated in the General Elections held on 8 April 2010, losing his seat in parliament. He had a long career in law running from 1976 to 1999, before being elected to the Sri Lankan parliament in 2000 from the United National Party, and then crossed over to Sri Lanka Freedom Party

Suratissa Diyasena Wijeyeratne was a Sri Lankan politician, diplomat, barrister and businessman. He was also Additional Secretary to the Ministry of External Affairs and Defence, and Senior Advisor to the Prime Minister.

Sir Ratnakirti Senerat Serasinghe Gunewardene was a Sri Lankan lawyer, statesmen and diplomat. He was the first Minister without Portfolio, member of parliament and member of the State Council of Ceylon for Gampola, before serving in several top diplomatic posts such as Ceylon's Ambassador to Ital, Ceylon's Ambassador to the United States, where he was appointed concurrently as Ceylon's first Permanent Representative to United Nations and Ceylon's High Commissioner to United Kingdom.

Prasad Kariyawasam is a Sri Lankan diplomat and the former Secretary to the Ministry of Foreign Affairs, the top diplomat in Sri Lanka.He was the International Affairs Adviser to Hon.Karu Jayasooriya, Speaker of the Parliament of Sri Lanka.He was the former Sri Lankan Ambassador to the United States. with concurrent accreditation as High Commissioner for Sri Lanka to Trinidad & Tobago and Ambassador (designate) to Mexico. He was also the Permanent Observer of Sri Lanka to the Washington based Organization of American States (OAS).He has also served as Sri Lankan Ambassador to India, Afghanistan and Bhutan.

Mohamed Asim is a Maldivian civil servant and diplomat who has been Minister of Foreign Affairs of the Maldives 2016 to 2018.

Zahiya Zareer, Dhivehi: ޒާހިޔާ ޒަރީރު is a Maldivian politician and former teacher; she is Ambassador-at-Large at the Ministry of Foreign Affairs of the Government of the Maldives and was formerly Ambassador to Sri Lanka, after held two ministerial government offices.