He was born in London to Jamaican parents. King moved to New York City as a 14-year-old where he excelled at sports, was on the school American Football team [1] and started weight training to develop his physique. [1] He fell victim to the crack boom of the late 70s and became a drug addict. His mother requested help from his father back in England who sent money to pay for his fare to England to escape drugs. King spent the money his father sent twice on drugs before the third time he bought a ticket and relocated to England, [1] at a time when the drug was becoming available and he started using again. [1] He eventually overcame his habit, married, had two children, Theo and Tiffany and concentrated on bodybuilding. [1]

King was preparing to enter into the world of professional bodybuilding, when he received a phone call from the producers of ITV's Gladiators in Birmingham offering him a place on the show. [1] Shadow was known for his stare and his record in the 'Duel' event. One of the more intimidating members of the Gladiators team, he once hit his opponent so hard in the Joust event that the ends of the pugil stick were clearly damaged.

In early 1995, King was at the centre of a steroid abuse scandal that saw him lose his job on the show. [2] [3] He was outed by the press after taking drugs in a London nightclub in King's Road. [1] After losing his job, his home in Kidderminster, and his wife and children, who moved to Essex. King relocated to London where he set up a business, [1] become a wrestler and had a cameo role in the Spice Girls movie Spiceworld in 1997. His fall from grace saw him turn to drugs, smoking heroin, crack cocaine, [1] and he struggled to deal with his addiction for nearly 20 years, turning to crime to pay for his habit which saw him in and out of jail. [1]

In March 2005, whilst travelling on the top deck of a 205 bus in Southall, London, King was discovered in possession of an elderly person's bus pass, which he had shown to the driver to board the bus, despite being only 43 at the time. He was arrested for being in possession of stolen property, and taken to Southall Police Station.

In an April 2011 interview he reported that he had finally beaten his addiction and was working at a drug rehabilitation clinic to help people suffering from drug problems and that he had restored contacts with his ex-wife and children and his mother whom he had avoided for many years because "he didn't want her seeing him like that". [1]

In 2021 King was part of a criminal gang whose members were charged with a range of offences in connection with the kidnapping, beating, and false imprisonment of Aaron Ali in Acton, west London, in March 2020 and a subsequent blackmail attempt on members of Ali's family. At Isleworth Crown Court, King and one other man both pleaded guilty to charges of blackmail and were remanded in custody awaiting sentencing. Four other defendants in the case denied the charges against them. [4]

He was jailed for 6 years in 2021 for the kidnapping, beating, and false imprisonment of Aaron Ali. [5] 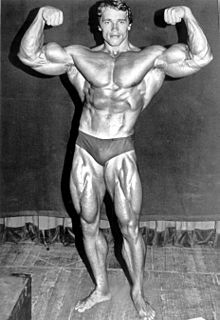 Bodybuilding is the use of progressive resistance exercise to control and develop one's muscles by muscle hypertrophy for aesthetic purposes. It is distinct from similar activities such as powerlifting because it focuses on physical appearance instead of strength. An individual who engages in this activity is referred to as a bodybuilder. In professional bodybuilding, competitors appear in lineups and perform specified poses for a panel of judges who rank them based on symmetry, muscularity, size, conditioning, posing, and stage presentation. Bodybuilders prepare for competitions through the elimination of nonessential body fat, enhanced at the last stage by a combination of extracellular dehydration and carbo-loading, to achieve maximum muscular definition and vascularity; they also tan and shave to accentuate the contrast of their skin under the spotlights.

Peter Doherty is an English musician, songwriter, actor, poet, writer, and artist. He is best known for being co-frontman of The Libertines, which he formed with Carl Barât in 1997. His other musical projects are indie band Babyshambles and Peter Doherty and the Puta Madres. Doherty has had a highly publicised and long-lasting drug addiction, and has served prison sentences for drug offences.

Dorian Andrew Mientjez Yates is an English retired professional bodybuilder. He won the Mr. Olympia title six consecutive times from 1992 to 1997 and has the fifth-highest number of Mr. Olympia wins in history, ranking behind Ronnie Coleman (8), Lee Haney (8), Arnold Schwarzenegger (7), and Phil Heath (7). He is widely considered to be one of the top pro bodybuilders in history, and was well known for his wide and thick back.

Victor Conte Jr. is a former bassist with Tower of Power and the founder and president of Bay Area Laboratory Co-operative (BALCO), a sports nutrition center in California. He served time in prison in 2005 after pleading guilty to conspiracy to distribute steroids and money laundering. He currently operates Scientific Nutrition for Advanced Conditioning.

David Byron Boston is a former professional football wide receiver who was found to be cheating when he tested positive for anabolic steroids and was banned for 4 games in 2004. He was originally drafted by the Arizona Cardinals eighth overall in the 1999 NFL Draft. During David Boston's college years he played football at Ohio State. Boston also played for the San Diego Chargers, Miami Dolphins, and Tampa Bay Buccaneers. Boston became a Pro Bowl selection with the Cardinals in 2001. The final years of Boston's career and his immediate post-football life was plagued by several arrests and other legal issues.

The World Bodybuilding Federation (WBF) was a bodybuilding organization founded in 1991 by Vince McMahon. It operated as a subsidiary of his company Titan Sports, the owners of the World Wrestling Federation. Tom Platz announced the formation of the WBF during the International Federation of BodyBuilding's (IFBB) Mr. Olympia competition in September 1990, which he and McMahon had attended as representatives of an accompanying magazine. 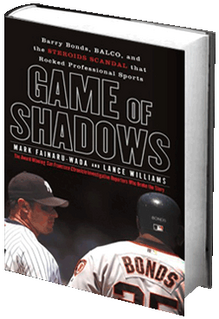 Game of Shadows: Barry Bonds, BALCO, and the Steroids Scandal that Rocked Professional Sports is a bestselling non-fiction book published on March 23, 2006 and written by Mark Fainaru-Wada and Lance Williams, reporters for the San Francisco Chronicle. When Sports Illustrated released excerpts from the book on March 7, it generated considerable publicity because the book chronicles alleged extensive use of performance-enhancing drugs, including several different types of steroids and growth hormones, by San Francisco Giants outfielder Barry Bonds.

Daniel Duchaine was an American bodybuilder, author, and two-time convicted felon. Nicknamed the steroid guru, Duchaine gained worldwide notoriety due to his outspoken opinions on the use of performance-enhancing drugs, and made numerous television appearances discussing the subject on shows such as 20/20, Geraldo, and 60 Minutes. Steroid Nation author and ESPN writer Shaun Assael calls Duchaine "a founding father of the steroid movement."

Nathan Baggaley is an Australian sprint canoeist and surfski champion. He is a three-times world champion in the K-1 500 m events and has also won two Olympic silver medals. His career has been tarnished by drug scandals and arrests.

Mark Smith is a British actor and body builder who starred as 'Rhino' on the popular ITV show, Gladiators. He now lives in Los Angeles.

Lucy Benson is a fictional character from the British Channel 4 soap opera, Hollyoaks, played by Kerrie Taylor. Taylor appeared from the first episode on 23 October 1995. Taylor later quit the role with the character leaving in January 2000 when she went travelling. The character's storylines included a heroin addiction. The character has been described as a "good daughter" type who changed becoming a "hopeless addict". 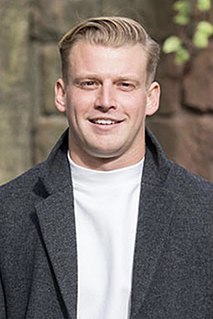 Seth Costello is a fictional character from the British television soap opera Hollyoaks, played by Miles Higson. He made his first appearance during the episode broadcast on 20 July 2010. His first major storyline was in 2011 when he was the centre of a steroids storyline. He also became involved in the storyline where his father Carl Costello began an affair with Mercedes McQueen. 2020 saw the return of Seth, when he blackmailed the McQueen family with grandfather Silas Blissett. He departed again on 2 February 2021.

Raoul Reginald "Reggie" de Veulle, was a British actor and fashion costumier. He was the son of a former British vice-consul at Le Mans and was born there, but raised in Jersey. He attended the Kensington School of Art and though he acted in a few West End shows, moved into fashion design.

Gladiators is a British television sports entertainment game show. An adaptation of the American programme and its format, American Gladiators, and was produced by LWT for ITV from 10 October 1992 to 1 January 2000, with a revival made for Sky 1 between 2008 and 2009. The programme's format sees four contestants, two male and two female, compete in a series of physical events against the show's "Gladiators", eventually competing in one final event, with contestants aiming to secure a place in the grand final and be crowned champion for their respective series. There were no prizes awarded to the winner in any episode, until the final.

Richard Eugene Piana was an American professional bodybuilder, businessman, and YouTuber. He won the National Physique Committee (NPC) Mr. Teen California title in 1989, NPC Mr. California in 1998, and National Physique Committee (NPC) competitions in 2003 and 2009. He had his own nutrition product line called Rich Piana: 5% Nutrition. He publicly admitted that he had been using anabolic steroids and hormones.

Tony Colston-Hayter is a former British acid house party promoter who was active in the late 1980s and was later convicted for theft and fraud offences. Colston-Hayter played video games as a child and set up three businesses in that sector whilst still at school. He afterwards became a professional gambler, claiming to be the second-most successful blackjack player in the country. Colston-Hayter became involved in the acid house music scene as a result of his late-night gambling. He saw a commercial potential for the music and in 1988 put on acid house party events at Wembley Studios in London, gaining publicity by inviting a film crew from ITV News at Ten. The following year, during the Second Summer of Love, Colston-Hayter moved his events to the countryside after having issues with venues in London. He developed a system of answerphone clues to guide people to the events, to avoid disruption from the police. Colston-Hayter unsuccessfully protested a change in law that increased the legal penalties for those organising such parties. By his own admission Colston-Hayter later abused A-class drugs and became involved in crime, carrying out bank thefts and frauds for which he received prison sentences in 2014 and 2018.