Joan Marter is an American academic, art critic and author. [1] A 1968 graduate of Temple University, Marter is the "Distinguished Professor of Art History" at Rutgers University. [2] Marter is the co-editor of the Woman's Art Journal , [3] [1] and the editor of The Grove Encyclopedia of American Art . [4]

Roger Sherman Loomis (1887–1966) was an American scholar and one of the foremost authorities on medieval and Arthurian literature. Loomis is perhaps best known for showing the roots of Arthurian legend, in particular the Holy Grail, in native Celtic mythology.

The mid-20th-century art movement Fluxus had a strong association with Rutgers University.

Joan Mitchell was an American "second generation" abstract expressionist painter and printmaker. She was a member of the American abstract expressionist movement, even though much of her career took place in France. Along with Lee Krasner, Grace Hartigan, Helen Frankenthaler, Shirley Jaffe, Elaine de Kooning, and Sonia Gechtoff, she was one of her era's few female painters to gain critical and public acclaim. Her paintings and editioned prints can be seen in major museums and collections across the United States and Europe.

John De Andrea is an American sculptor known for his realistic sculptures of human figures, dressed or nude and in true-to-life postures. 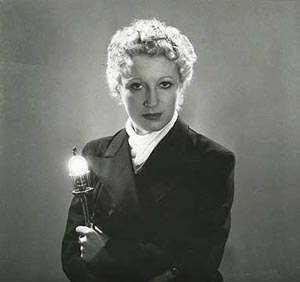 Jacqueline Lamba was a French painter and surrealist artist. She was married to the surrealist André Breton.

Emma Amos was a postmodern African-American painter and printmaker.

Grafton Tyler Brown was an American painter, lithographer and cartographer. Brown was the first African-American artist to create works depicting the Pacific Northwest and California.

The Center of Alcohol Studies (CAS) is a multidisciplinary research institute located in the Busch Campus of Rutgers University, which performs clinical and biomedical research on alcohol use and misuse. The center was originally at Yale University and known as the Yale Center of Alcohol Studies, before it moved to Rutgers in 1962. The CAS is also home to the peer-reviewed Journal of Studies on Alcohol and Drugs (JSAD), the oldest journal on alcohol studies; and a library of alcohol literature. Early research in the 1940s at the CAS helped support the disease model of addiction that helped change public perception on alcohol consumption. 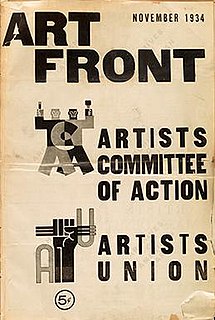 Art Front was an art magazine co-founded by the Artists' Committee of Action and the Artists Union in New York. Twenty-five issues appeared between November 1934 and December 1937.

Hermine Freed was an American painter and video artist. She is noted for being among the first generation of artists to explore video art in the late 1960s.

Denyse Thomasos was a Trinidadian-Canadian painter known for her abstract-style wall murals that conveyed themes of slavery, confinement and the story of African and Asian Diaspora. "Hybrid Nations" (2005) is one of her most notable pieces that features Thomasos' signature use of dense thatchwork patterning and architectural influence to portray images of American superjails and traditional African weavework.

Walter Percy Chrysler Jr. was an American art collector, museum benefactor, and collector of other objects such as stamps, rare books, and glassworks. He was also a theatre and film producer.

The Woman's Art Journal (WAJ) is a feminist art history journal that focuses on women in the visual arts. The journal also serves as a forum "for critical analysis of contemporary art issues as they relate to women."

Frances Elaine Keillor C.M. is a Canadian musicologist and pianist. She has been a professor of music at Carleton University since 1977, specializing in the music of Canadian composers and the music of North American indigenous groups.

Niles Spencer was an American painter of the Precisionist School who specialized in depicting urban and industrial landscapes. His works are in the permanent collections of several major museums including the Metropolitan Museum of Art, the Whitney Museum of American Art, and MoMA.