The John Drayton House is a two-story wooden residence constructed on property that had been given by the state's first lieutenant governor, William Bull, to his son-in-law, John Drayton. [1] The house was built, probably by John Drayton (the builder of Drayton Hall plantation), some time after 1746 with alterations made in about 1813 and again in about 1900. [2] Over time, the house has been attributed to different owners; during most of the 20th century, the house was credited to James Shoolbred, the first British consul in Charleston, with a construction date of about 1793. [3]

Rainbow Row is the name for a series of thirteen colorful historic houses in Charleston, South Carolina. The houses are located north of Tradd St. and south of Elliott St. on East Bay Street, that is, 79 to 107 East Bay Street. The name Rainbow Row was coined after the pastel colors they were painted as they were restored in the 1930s and 1940s. It is a popular tourist attraction and is one of the most photographed parts of Charleston.

The Charles Drayton House is a historic Victorian home at 25 East Battery, Charleston, South Carolina. It was completed in 1886 for Charles H. Drayton (1847-1915), having been designed by W.B.W. Howe, Jr.

The Patrick O'Donnell House is the largest example of Italianate architecture in Charleston, South Carolina. It was built for Patrick O'Donnell (1806-1882), perhaps in 1856 or 1857. Other research has suggested a construction date of 1865. Local lore has it that the three-and-a-half-story house was built for his would-be bride who later refused to marry him, giving rise to the house's popular name, "O'Donnell's Folly." Between 1907 and 1937, it was home to Josephine Pinckney; both the Charleston Poetry Society and the Society for the Preservation of Spirituals were formed at the house during her ownership. 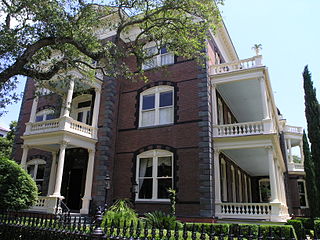 The Williams Mansion is a Victorian house at 16 Meeting St., Charleston, South Carolina. The mansion is open for public tours. 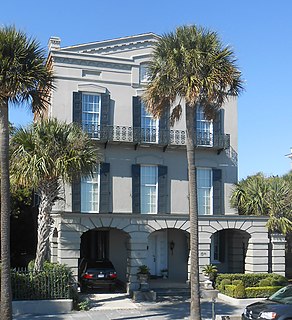 The William Ravenel House is an historic house in Charleston, South Carolina.

The John Cordes Prioleau House is a historic residence in Charleston, South Carolina. 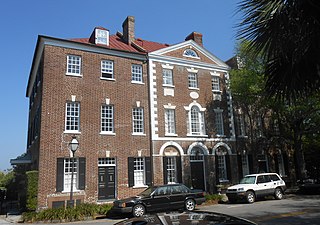 Vanderhorst Row in Charleston, South Carolina is a three-unit residential building built in 1800 by Arnoldus Vanderhorst, a governor of South Carolina (1792-1794). Each unit is four floors. The units at the north and south end of the range have doors along East Bay Street on the front in addition to doors on the sides of the unified building and exits to the rear. After the Civil War, the use of the building changed, and commercial purposes were installed. The building fell into disrepair before it was bought in 1935 by Josiah E. Smith for a restoration which cost $30,000. The architect for the restoration of the building was Stephen Thomas. The three units rented for $1500 to $1800 a year after the work was completed. As restored, each unit had a living room, dining room, kitchen, breakfast room, and pantry on the first floor; a drawing room, bedroom, and bath on the second; two more bedrooms on the third; and servants' rooms in the attic. For many years after the restoration of the building, the central unit was rented by the Charleston Club for its headquarters; the club relocated to 53 East Bay Street in 1958.

The John Ashe House is an 18th-century house at 32 South Battery, Charleston, South Carolina. The house's date of construction is unknown, but it was built sometime around 1782 and renovated in the 1930s. In August 2015, it replaced the James Simmons House as the most expensive house sold in Charleston when it fetched about $7.72 million.

The John Lining House is one of the oldest houses in Charleston. Although the lot upon which the house stands was first conveyed to French Huguenot immigrant Jaques DeBordeaux in 1694, it is uncertain when the house was built; the first mention of a house appears in a 1715 deed by which the property, including a dwelling, was conveyed to William Harvey, Jr. In 1757, the house was received by Mrs. Sarah Lining, the wife of Dr. John Lining. Although the couple owned the house for less than one year before transferring it to John Rattray, Dr. Lining's name stuck as the name of the dwelling. In 1780, the building was acquired by Dr. Andrew Turnbull, the founder of New Smyrna, Florida, who opened in the house the first of a long series of apothecary shops which remained until 1960. 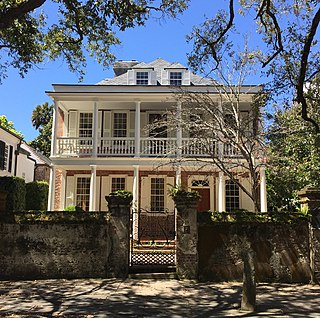 The George Eveleigh House is a pre-Revolutionary house in Charleston, South Carolina. The house was built about 1743 for trader George Eveleigh. Eventually, Eveleigh returned to England and sold his house to John Bull in 1759. John Bull or one of his heirs subsequently built the house at 34 Meeting Street on the rear of the property; the parcel had originally run from Church Street through the block to Meeting Street on the west. The house retains much of its original cypress woodwork although many of the fireplace mantels were replaced in the Adam period.

The Robert Pringle House is a historic house in Charleston, South Carolina.

The William Vanderhorst House was used as the first post office in Charleston, South Carolina before 1753. Eleazer Philips was the first postmaster of Charleston to have a dedicated office for the handling of the mail, and he used 54 Tradd Street for that purpose. Earlier postmasters handled the mail in their own houses. The house was used as a post office until after 1791 when Peter Bacot relocated the operation to 84 Broad Street.

The John Fullerton House is a historic building on Legare Street in Charleston, South Carolina. The house was designed and built by Scottish master builder John Fullerton some time after he bought the land on December 31, 1772, and before he resold it at a much higher cost in 1777. Among the notable features of the house are the highly decorative window casings on the first and second floor; the console brackets and hoods reflect a high style that can be found on other notable houses of the same period in Charleston. The house is built of cypress. 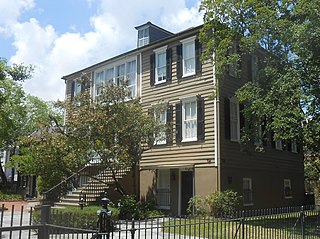 The Daniel Legare House is the oldest surviving house in the historic Ansonborough area of Charleston, South Carolina. The land upon which the house was built was sold to Daniel Crawford in May 1745 for a price that was much lower than expected for a house at the time, thereby suggesting a construction date after that time.

The John Scott House at 38 Coming Street is one of the two oldest buildings on the Charleston, South Carolina campus of the College of Charleston.

The Charles Elliott House is a pre-Revolutionary house in Charleston, South Carolina. Charles Elliott paid 2,500 pounds "current currency" for the property in 1764. Charles Elliott and his wife, Anne, were patriots during the Colonial period who maintained their family seat at Sandy Hill.

Yeamans Hall Club is a country club built on a 1100-acre tract about 12 miles from Charleston, South Carolina, along Goose Creek on the site of a 17th-century plantation.