In astronomy, a Julian year (symbol: a) is a unit of measurement of time defined as exactly 365.25 days of 86400 SI seconds each. [1] [2] [3] [4] The length of the Julian year is the average length of the year in the Julian calendar that was used in Western societies until the adoption of the Gregorian Calendar, and from which the unit is named. Nevertheless, because astronomical Julian years are measuring duration rather than designating dates, this Julian year does not correspond to years in the Julian calendar or any other calendar. Nor does it correspond to the many other ways of defining a year.

In astronomy, an epoch specifies a precise moment in time. The positions of celestial objects and events, as measured from Earth, change over time, so when measuring or predicting celestial positions, the epoch to which they pertain must be specified. A new standard epoch is chosen about every 50 years.

The Julian year, being a uniform measure of duration, should not be confused with the variable length historical years in the Julian calendar. An astronomical Julian year is never individually numbered. When not using Julian day numbers (see next §), astronomers follow the same conventional calendars that are accepted in the world community: They use the Gregorian calendar for events since its introduction on October 15, 1582 (or later, depending on country), and the Julian calendar for events before that date, and occasionally other, local calendars when appropriate for a given publication.

A Julian year should not be confused with the Julian day, which is also used in astronomy (more properly called the Julian day number or JDN). The JDN uniquely specifies a place in time, without becoming bogged down in its date-in-month, week, month, or year in any particular calendar. Despite the similarity of names, there is almost no connection between the Julian day numbers and Julian years.

The Julian day number is a simplified time-keeping system originally intended to ease calculation with historical dates which involve a diversity of local, idiosyncratic calendars. It was adopted by astronomers in the mid-1800s, and identifies each date as the integer number of days that have elapsed since a reference date ("epoch"), chosen to precede most, if not all, historical records. A specific time within a day, always using UTC, is specified via a decimal fraction. 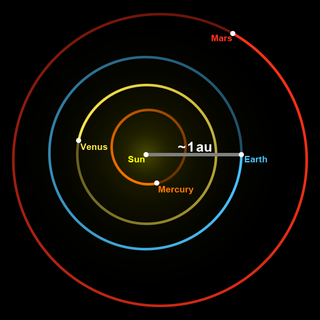 The astronomical unit is a unit of length, roughly the distance from Earth to the Sun and equal to about 150 million kilometres or ~8 light minutes. The actual distance varies by about 3% as Earth orbits the Sun, from a maximum (aphelion) to a minimum (perihelion) and back again once each year. The astronomical unit was originally conceived as the average of Earth's aphelion and perihelion; however, since 2012 it has been defined as exactly 149597870700 m.

The term ephemeris time can in principle refer to time in association with any ephemeris. In practice it has been used more specifically to refer to:

The Revised Julian calendar, also known as the Milanković calendar, or, less formally, new calendar, is a calendar proposed by the Serbian scientist Milutin Milanković in 1923, which effectively discontinued the 340 years of divergence between the naming of dates sanctioned by those Eastern Orthodox churches adopting it and the Gregorian calendar that has come to predominate worldwide. This calendar was intended to replace the ecclesiastical calendar based on the Julian calendar hitherto in use by all of the Eastern Orthodox Church. From 1 March 1600 through 28 February 2800, the Revised Julian calendar aligns its dates with the Gregorian calendar, which was proclaimed in 1582 by Pope Gregory XIII for adoption by the Christian world. The calendar has been adopted by the Orthodox churches of Constantinople, Albania, Alexandria, Antioch, Bulgaria, Cyprus, Greece, America, and Romania.

Terrestrial Time (TT) is a modern astronomical time standard defined by the International Astronomical Union, primarily for time-measurements of astronomical observations made from the surface of Earth. For example, the Astronomical Almanac uses TT for its tables of positions (ephemerides) of the Sun, Moon and planets as seen from Earth. In this role, TT continues Terrestrial Dynamical Time, which succeeded ephemeris time (ET). TT shares the original purpose for which ET was designed, to be free of the irregularities in the rotation of Earth.

A time standard is a specification for measuring time: either the rate at which time passes or points in time or both. In modern times, several time specifications have been officially recognized as standards, where formerly they were matters of custom and practice. An example of a kind of time standard can be a time scale, specifying a method for measuring divisions of time. A standard for civil time can specify both time intervals and time-of-day.

The light-second is a unit of length useful in astronomy, telecommunications and relativistic physics. It is defined as the distance that light travels in free space in one second, and is equal to exactly 299,792,458 metres (983,571,056 ft).

In astronomy, an epoch or reference epoch is a moment in time used as a reference point for some time-varying astronomical quantity. It is useful for the celestial coordinates or orbital elements of a celestial body, as they are subject to perturbations and vary with time. These time-varying astronomical quantities might include, for example, the mean longitude or mean anomaly of a body, the node of its orbit relative to a reference plane, the direction of the apogee or aphelion of its orbit, or the size of the major axis of its orbit.

The astronomical system of units, formerly called the IAU (1976) System of Astronomical Constants, is a system of measurement developed for use in astronomy. It was adopted by the International Astronomical Union (IAU) in 1976 via Resolution No. 1, and has been significantly updated in 1994 and 2009. 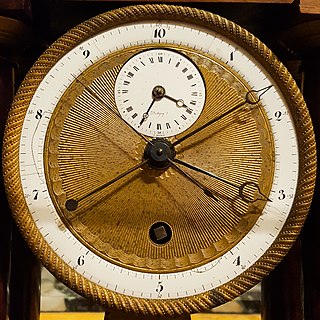 Decimal time is the representation of the time of day using units which are decimally related. This term is often used specifically to refer to the time system used in France for a few years beginning in 1792 during the French Revolution, which divided the day into 10 decimal hours, each decimal hour into 100 decimal minutes and each decimal minute into 100 decimal seconds, as opposed to the more familiar UTC time standard, which divides the day into 24 hours, each hour into 60 minutes and each minute into 60 seconds.

A unit of time or midst unit is any particular time interval, used as a standard way of measuring or expressing duration. The base unit of time in the International System of Units (SI) and by extension most of the Western world, is the second, defined as about 9 billion oscillations of the caesium atom. The exact modern definition, from the National Institute of Standards and Technology is: "The duration of 9192631770 periods of the radiation corresponding to the transition between the two hyperfine levels of the ground state of the caesium-133 atom."

The light-year is a unit of length used to express astronomical distances and is equivalent to about 9.46 trillion kilometres (9.46×1012 km) or 5.88 trillion miles (5.88×1012 mi). As defined by the International Astronomical Union (IAU), a light-year is the distance that light travels in vacuum in one Julian year (365.25 days). Because it includes the word "year", the term light-year is sometimes misinterpreted as a unit of time.