Junior Chamber International, commonly referred to as JCI, is a non-profit international non-governmental organization [1] of young people between 18 and 40 years old. It has members in about 124 countries, and regional or national organizations in most of them. [3]

The first local Junior Chamber chapter was founded in 1915, but the international umbrella organization Junior Chamber International (JCI) was founded in Mexico in 1944. It has consultative status with the Council of Europe, with the Economic and Social Council of the United Nations and with UNESCO. [1] It encourages young people to become active citizens and to participate in efforts towards social and economic development, and international cooperation, good-will and understanding. [1]

By the age of 18, Henry Giessenbier Jr. had formed the Herculaneum Dance Club, a social outlet for the community’s youth. On October 13, 1915, the first JCI Movement was founded when 32 men joined to form the Young Men’s Progressive Civic Association (YMPCA) at the Mission Inn located in their hometown of St. Louis, USA. The Young Men’s Progressive Civic Association members received acknowledgement from the broader community, however on November 30, 1915 official recognition of the organization was granted after enrolling as a member of the Mayor’s Conference of Civic Organizations. One year later, the YMPCA became known as the Junior Citizens and soon the Junior Chamber of Commerce, after affiliating with the St. Louis Chamber of Commerce. On December 11, 1944, an Inter-American Congress was held in Mexico City. Representatives from the United States, Costa Rica, El Salvador, Guatemala, Honduras, Mexico, Nicaragua and Panama gathered to officially establish Henry Giessenbier's 24-year-old civic association as an international organization, Junior Chamber International. In 2015 the organization celebrated its 100th anniversary. [4]

The local organizations are referred to as "Chapters" or Local Organization Members (LOM) with a local board, and it is at the local level that most activities take place: conferences, projects, local publications, etc. A Chapter will be member of a national organization or National Organization Member (NOM) that is governed by a national board. The different NOMs are members of Junior Chamber International. The international organization publishes JCI World, a quarterly magazine, in six languages. [1] It holds an annual conference, the JCI World Congress, in November of each year and regional annual meetings, the JCI Area Conferences. [5]

Typically leadership positions in the organization are held only for one year; this goes for JCI Chapter Presidents, for JCI National Presidents and also for the JCI World Presidents. Some members are given life membership of the organization and become "senators" and members of the JCI Senate. The Ten Outstanding Young Persons of the World (TOYP) program is organized annually by Junior Chamber International and is a well-known activity that is often reported on by local news media. [6]

The American Hellenic Educational Progressive Association (AHEPA) is a fraternal organization founded on July 26, 1922, in Atlanta, Georgia. AHEPA was founded to fight for civil rights and against discrimination, bigotry, and hatred felt at the hands of the Ku Klux Klan. It is the largest and oldest grassroots association of American citizens of Greek heritage and Philhellenes with more than 400 chapters across the United States, Canada, and Europe. 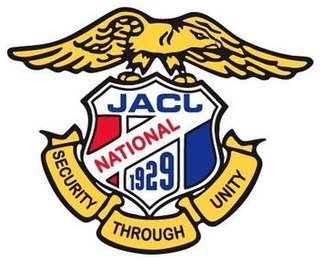 The Japanese American Citizens League is an Asian American civil rights charity, headquartered in San Francisco, with regional offices across the United States.

FarmHouse (FH) is a social fraternity founded at the University of Missouri on April 15, 1905. It became a national organization in 1921. Today FarmHouse has 34 active chapters and four associate chapters in the United States and Canada.

The General Federation of Women's Clubs (GFWC), founded in 1890 during the Progressive Movement, is a federation of over 3,000 women's clubs in the United States which promote civic improvements through volunteer service. Many of its activities and service projects are done independently by local clubs through their communities or GFWC's national partnerships. GFWC maintains nearly 70,000 members throughout the United States and internationally. GFWC remains one of the world's largest and oldest nonpartisan, nondenominational, women's volunteer service organizations. The GFWC headquarters is located in Washington, D.C.

Active citizenship refers to a philosophy espoused by organizations and educational institutions which advocates that members of charitable organizations, companies or nation-states have certain roles and responsibilities to society and the environment, although those members may not have specific governing roles.

The Civic Chamber of the Russian Federation, sometimes shortened to Civic Chamber, is a consultative civil society institution with 168 members created in 2005 in Russia to analyze draft legislation and monitor the activities of the parliament, government and other government bodies of Russia and its Federal Subjects. It has a role similar to an oversight committee and has consultative powers. A convocation of the chamber is in power for a three-year term. 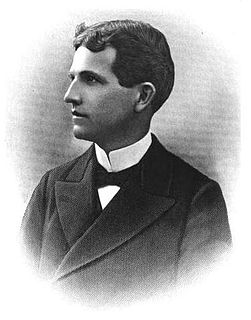 Junius Edgar West was a Virginia politician and businessman who was born in Sussex County, Virginia, on July 12, 1866, and whose long and distinguished career culminated in two terms as the 22nd Lieutenant Governor of Virginia.

Ten Outstanding Young Persons of the World (TOYP) program serves to formally recognize young people who excel in their chosen fields and exemplify the best attributes of the world's young people. The program is sponsored by Junior Chamber International (JCI).

The Ten Outstanding Young Americans (TOYA) program is an annual award given by JCI USA. It is given to ten Americans between 18 and 40 years of age who "exemplify the best attributes of the nation’s young people."

Henry Giessenbier (1892–1935) was an American banker in St. Louis, Missouri of German ancestry. He became the founder of the Young Men's Progressive Civic Association in 1915 and the United States Junior Chamber in 1920.

The Zimbabwe National Chamber of Commerce is a private sector voluntary organization established in 1894 for The Chamber is established for the purpose of developing, promoting, and lobbying for its members and the local business community. 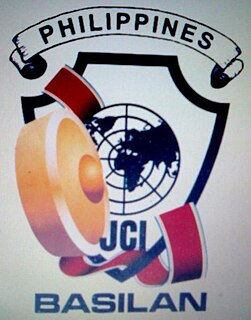 The National Conference on Citizenship (NCoC) is a non-partisan, non-profit organization dedicated to strengthening civic life in America. They pursue their mission through a nationwide network of partners involved in a cutting-edge Civic Health Initiative, annual cross-sector conferences, and engagement with a broad spectrum of individuals and organizations interested in utilizing civic engagement principles and practices to enhance their work. Connecting people for the purpose of strengthening civic life is NCoC's goal. At the core of NCoC's joint efforts is the belief that every person has the ability to help his or her community and country thrive.

The United States Junior Chamber, also known as the Jaycees, JCs or JCI USA, is a leadership training and civic organization for people between the ages of 18 and 40. It is a branch of Junior Chamber International (JCI). Areas of emphasis are business development, management skills, individual training, community service, and international connections. The U.S. Junior Chamber is a not-for-profit corporation/organization as described under Internal Revenue Code 501(c)(4).

Koyamada International Foundation, commonly referred to as KIF or KIF Global, is an international non-governmental organization, with its mission to improve quality of people's life by empowering global youth and women to reach their full potential and by providing humanitarian aid to promote global peace and sustainable development. It has affiliated national chapter members in seven countries.

The Outstanding Young Men (TOYM) award in the Philippines, formerly known as the The Outstanding Young Filipinos (TOYF) from 1996 to 1999, is an annual national recognition awarded to Filipinos between 18 and 40 years of age who have made significant contributions to their field or community. The award is organized by the Junior Chamber International Philippines and co-sponsored by the TOYM Foundation, and the Gerry Roxas Foundation.