The film is about how Kasargod Khader Bhai (Alummoodan) and his son Kasim Bhai (Babu Antony), a criminal who attempts to murder people in his reach tries to take revenge on the mimicry artists who send Khader Bhai to jail (This is shown in the prequel).

Twenty:20 is a 2008 Indian Malayalam-language action thriller film written by Udayakrishna and Siby K. Thomas and directed by Joshiy. The film stars Mohanlal, Mammootty, Suresh Gopi, Jayaram and Dileep. The film was produced and distributed by actor Dileep through Graand Production and Manjunatha Release.

Pappan Priyappetta Pappan is a 1986 Indian Malayalam-Fantasy film directed by Sathyan Anthikad and written by Siddique–Lal. It stars Mohanlal, Rahman, Thilakan, Lissy, Bahadoor, Unni Mary, Rajan P. Dev and Sankaradi. This is the debut film of Siddique-Lal duo and Harisree Ashokan. The storyline is similar to Heaven Can Wait.

Ice Cream is a 1986 Indian Malayalam film, directed by Antony Eastman and produced by Hameed. The film stars Mammootty, Lissy, Jayarekha and Innocent in the lead roles. Musical score of the film is composed by Johnson. 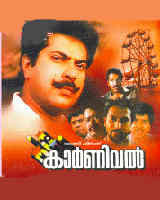 Carnivel is a 1989 Malayalam comedy film written by S. N. Swamy and directed by P. G. Viswambharan. The film centres on the backdrops of a carnival. It stars Mammootty, Parvathy, Sukumaran and Babu Antony in pivotal roles. The film was shot in Thrissur and nearby areas including Puthukkad during March April. 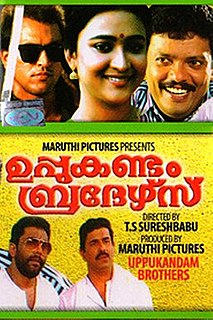 Welcome to Kodaikanal is a 1992 Malayalam movie written by Kaloor Dennis and directed by Anil Babu. The movie features Jagadish, Siddique, Anusha, and Sai Kumar in the lead roles. The movie was produced by Hameed under the banner of Gemi Movies and was distributed by Pratheeksha Pictures. 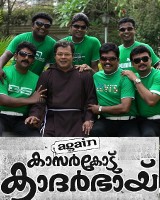 Kalabhavan, also known as Cochin Kalabhavan, is a centre for learning performing arts in Kochi, India. Kalabhavan is notable and known for being the first organized performing mimicry group in Kerala and which popularised the art of mimicry in the state of Kerala. Ever since its founding, Kalabhavan has served as a grooming centre for acting aspirants. Hence, Kalabhavan has contributed numerous actors as well as film directors to Malayalam cinema. 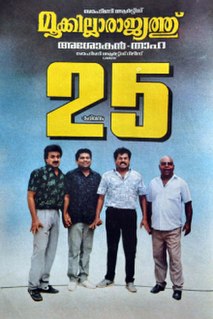 Marupacha is a 1982 Indian Malayalam film, directed and produced by S. Babu. The film stars Prem Nazir, Swapna and Sukumari in the lead roles. The film has musical score by A. T. Ummer.

Hitler Brothers is a 1997 Indian Malayalam-language action film directed by Sandhya Mohan and produced by E. Unni Krishnan. The film stars Prem Kumar, Jagathy Sreekumar, Mala Aravindan and A. C. Zainuddin in the lead roles. The film has musical score by S. P. Venkatesh. Babu Antony made a cameo appearance.

Sowbhagyam is a 1993 Indian Malayalam film, directed by Sandhya Mohan and starring Sunitha and Jagadish in lead roles.