The Kennedy Center Friedheim Award was an annual award given for instrumental music composition by the John F. Kennedy Center for the Performing Arts in Washington, D.C.. It was established in 1978 [1] and ended in 1995. The award was given only to American composers.

The award was established by Eric Friedheim (1910–2002), the publisher of Travel Agent magazine and a patron of the arts, and funded by the Eric Friedheim Foundation and the Kennedy Center Corporate Fund. He endowed the award in honor of his father, the pianist Arthur Friedheim (1859–1932), who had studied with Franz Liszt. [2]

The first prize was US$5,000, the second prize was $2,500 (originally $2,000), the third prize was $1,000, and the fourth prize was $500. There was no fourth prize until 1984, and the third prize was originally $500. The winners were narrowed down from often over 100 entries, to four or five finalists. The works were performed and the awards were given at an awards ceremony, which was held each year at the John F. Kennedy Center for the Performing Arts. The award alternated every other year between orchestral and chamber music.

The awards came to an end following the last ceremony in 1995, when Eric Friedheim decided to withdraw his financial support, choosing to instead donate his remaining financial assets to the Peabody Institute. 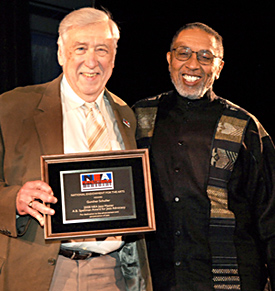 George Rochberg was an American composer of contemporary classical music. Long a serial composer, Rochberg abandoned the practice following the death of his teenage son in 1964; he claimed this compositional technique had proved inadequate to express his grief and had found it empty of expressive intent. By the 1970s, Rochberg's use of tonal passages in his music had invoked controversy among critics and fellow composers. A teacher at the University of Pennsylvania until 1983, Rochberg also served as chairman of its music department until 1968 and was named the first Annenberg Professor of the Humanities in 1978. For notable students See: List of music students by teacher: R to S#George Rochberg.

Dawn Upshaw is an American soprano. The recipient of several Grammy Awards and Edison Prize-winning discs, she performs both opera and art song, and in repertoire from Baroque to contemporary. Many composers, including Henri Dutilleux, Osvaldo Golijov, John Harbison, Esa-Pekka Salonen, John Adams, and Kaija Saariaho, have written for her. In 2007, she was awarded a MacArthur Fellowship.

Richard Wernick is an American composer. He is best known for his chamber and vocal works. His composition Visions of Terror and Wonder won the 1977 Pulitzer Prize for Music.

The Theodore Presser Company is an American music publishing and distribution company located in Malvern, Pennsylvania, formerly King of Prussia, Pennsylvania and originally based in Bryn Mawr, Pennsylvania. It is the oldest continuing music publisher in the United States. It has been owned by Carl Fischer Music since 2004. 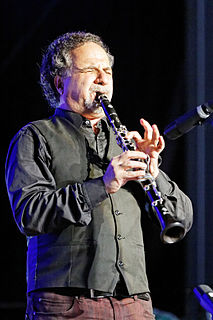 Neva Pilgrim is an American soprano known for her work in the performance of contemporary classical music.

Octavio Brunetti was a pianist, arranger and composer from Argentina. He was best known for his participation in the album Te amo tango by Raul Jaurena, which won the Latin Grammy Award for Best Tango Album in 2007, and was one of the most sought after tango pianists.

The St. Lawrence String Quartet is a Canadian string quartet, and one of Canada's premier chamber ensembles.

La Pasión según San Marcos is a contemporary classical composition by Argentinian composer Osvaldo Golijov. It was finished in 2000 and is amongst Golijov's most well known compositions. It is famous for combining several Latin and African musical styles.

The Symphony is a symphony for orchestra by the Israeli-American composer Shulamit Ran. The work was commissioned by the Philadelphia Orchestra under the direction of Riccardo Muti in 1987 and was given its world premiere on October 19, 1990. The piece was awarded the 1991 Pulitzer Prize for Music and took the first place Kennedy Center Friedheim Award that same year. It was composed in a primarily atonal style.

Thomas Ludwig is an American composer of classical music and a symphony conductor. His works have been performed and recorded with orchestras such as the London Symphony Orchestra, Indianapolis Symphony Orchestra, and the New York City Symphony, and have won prizes at the Kennedy Center Friedheim Awards in Washington, D.C. and the Indiana State University Contemporary Music Festival.

The Stoeger Prize from the Chamber Music Society of Lincoln Center is an international music prize for composers of chamber music. The US$25,000 cash award is given every two years in recognition of significant contributions to the chamber music repertory. The money was donated by Milan Stoeger, a psychoanalyst and a long-time subscriber to the Chamber Music Society, in honor of his wife. The Elise L. Stoeger Prize was established in 1987.