Kevin Mock is an American television director, editor, and producer.

He is well known for his work on The WB/CW 's America's Next Top Model .

The WB Television Network was an American television network that was first launched on broadcast television on January 11, 1995, as a joint venture between the Warner Bros. Entertainment division of AT&T's WarnerMedia and the Tribune Broadcasting subsidiary of the Tribune Company, with the former acting as controlling partner. The network principally aired programs targeting teenagers and young adults between the ages of 13 and 34, with the exception of its weekday daytime and Saturday morning program block, Kids' WB, which was geared toward children ages 7 to 12.

The CW Television Network is an American English-language free-to-air television network that is operated by the CW Network, LLC, a limited liability joint venture between CBS Corporation, the former owners of United Paramount Network (UPN); and AT&T, whose WarnerMedia subsidiary is the parent company of Warner Bros., former majority owner of The WB. The network's name is an abbreviation derived from the first letters of the names of its two parent corporations.

Mock got his start as a production assistant on Art Camacho's The Power Within in 1995. He first worked in editing on the Anna Nicole Smith starrer To the Limit , as an assistant. His first edited feature was 1996s Tiger Heart , directed by George Chamchoum. He then went on to join television with TNT 's L.A. Heat . He served as associate producer, and eventually co-producer, and editor until the series' conclusion in 1999. 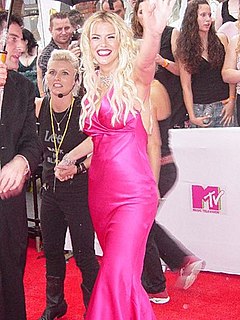 Anna Nicole Smith was an American model, actress and television personality. Smith first gained popularity in Playboy magazine when she won the title of 1993 Playmate of the Year. She modeled for fashion companies, including Guess, H&M, Heatherette and Lane Bryant.

To the Limit is a 1995 action thriller film directed by Raymond Martino and starring Michael Nouri as China Smith and Joey Travolta as Frank Davinci. The film is a sequel to DaVinci's War, and its plot concerns a CIA rogue division war against the criminal underworld. It was the first starring role for Anna Nicole Smith, coming after being named Playboy Playmate of the Year.

In 2003, he joined the crew of Tyra Banks ' reality competition series America's Next Top Model . Mock would go on to serve in the capacities of creative consultant, editor, co-producer and segment director. He was an integral part of the show until his departure after the 13th cycle. He ultimately edited 24 episodes and co-produced 94.

Tyra Lynne Banks is an American television personality, producer, businesswoman, actress, author, former model and occasional singer. Born in Inglewood, California, she began her career as a model at the age of 15, and was the first woman of African American descent to be featured on the covers of GQ and the Sports Illustrated Swimsuit Issue, on which she appeared twice. She was a Victoria's Secret Angel from 1997 to 2005. By the early 2000s, Banks was one of the world's top-earning models.

He has edited for such series as Stylista, Breaking In , Cult , Forever and Teen Wolf . In recent years, he has segued to directing and helming three episodes of The CW's Hart of Dixie . [1] Mock has only edited and directed two series in his career, the first being NBC 's spy comedy Chuck , and the second being The CW's superhero team-up series DC's Legends of Tomorrow . Both series are showrunned/executive produced by Phil Klemmer and Chris Fedak, who brought Mock on board. [2] [3] 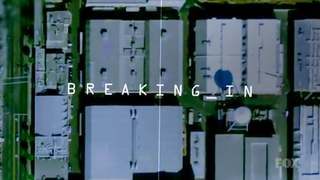 Breaking In is an American sitcom television series, which ran on Fox from April 6, 2011 to April 3, 2012. The series debuted as a mid-season replacement following American Idol. 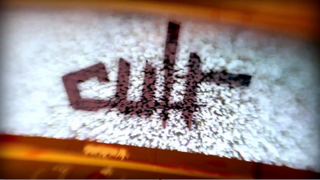 Cult is an American television series created by Rockne S. O'Bannon that ran on The CW from February 19 to July 12, 2013, and originally aired on Tuesdays at 9:00 pm Eastern/8:00 pm Central. The series centers on a journalist blogger and a production assistant, who investigate a series of mysterious disappearances that are linked to a popular television series named Cult. 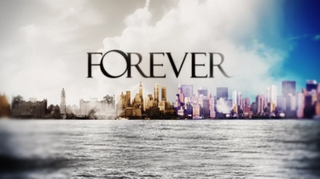 Forever is an American fantasy crime drama television series that aired on ABC as part of the 2014–15 fall television season. Created by Matt Miller, it centers on the character of Dr. Henry Morgan, an immortal New York City medical examiner who uses his extensive knowledge to assist the New York City Police Department (NYPD) in solving crimes and to discover a way to end his immortality. Flashbacks within each episode reveal various details of Henry's life.

Gregory Berlanti is a WGA, DGA and Golden Globe nominated writer, producer, and film director. He is known for his work on the television series Dawson's Creek, Brothers & Sisters, Everwood, Political Animals, Riverdale, Chilling Adventures of Sabrina and You, in addition to his contributions to DC Comics on film and television, including The CW's Arrowverse. In 2018, Berlanti set a record in having 15 different live-action scripted television series planned to air in the 2018–19 television season on various networks and digital platforms, and he signed the most expensive producer deal to date with Warner Bros. Berlanti also directed the 2018 romantic comedy-drama film Love, Simon. Notable as the first film by a major Hollywood studio to focus on a gay teenage romance, it grossed $66 million worldwide.

Stuart Baird is an English film editor, producer, and director who is mainly associated with action films. He has edited over twenty major motion pictures.

Robert Andrew "Andy" Ackerman is an American director and producer and script editor who is best known for his work on Seinfeld, The New Adventures of Old Christine and the HBO series Curb Your Enthusiasm. He is a 1978 graduate of Santa Clara University.

David Wohl is an American comic book writer and editor. He is best known as an editor at Marvel Comics and Top Cow Productions and, at the latter, writing The Darkness and Witchblade. 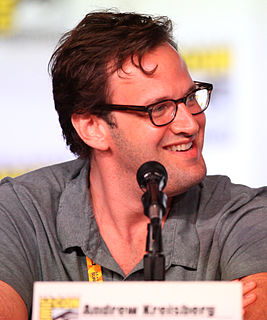 Andrew Kreisberg is an American television writer, producer and comic book writer. He is best known as the creator of the television series Arrow, The Flash, Supergirl, and Legends of Tomorrow.

Kevin Smith is an American screenwriter, actor, film producer, and director. The following is a filmography chronicling his work. 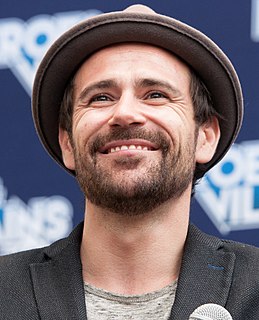 Matthew Darren Evans, known professionally as Matt Ryan, is a Welsh actor. He is known for voicing Edward Kenway in the Ubisoft video game Assassin's Creed IV: Black Flag, and portraying John Constantine in NBC's Constantine and The CW's Arrowverse, as well as voicing the character in the 2017 film Justice League Dark and its CW Seed spin-off web series Constantine: City of Demons.

Chris McCaleb is an American film and television director, producer and editor, best known as the co-creator of the web series Prom Queen and co-host of the Better Call Saul Insider and New Mediacracy podcasts. In recent years, McCaleb has been Emmy-nominated for editing on the television series Breaking Bad and Better Call Saul. 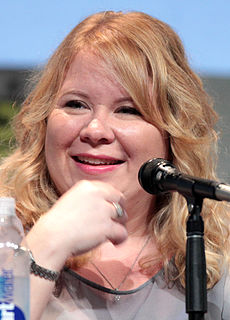 Julie Plec is an American television producer and writer, known for two CW television series: The Vampire Diaries which she co-created with Kevin Williamson, and its spin-off The Originals. She also developed the TV series Containment.

Glen Winter is a Canadian television director, cinematographer, and producer who is well known for his work on The WB/The CW's Smallville and for his significant contributions to the Arrowverse. 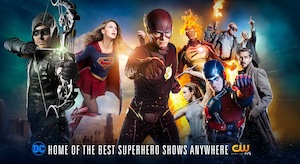 The Arrowverse is an American media franchise and shared fictional universe that is centered on various television series airing on The CW and web series airing on CW Seed. The series were developed by Greg Berlanti, Marc Guggenheim, Andrew Kreisberg, Ali Adler, Phil Klemmer, and Geoff Johns, and based on characters appearing in publications by DC Comics. The shared universe, much like the DC Universe in comic books, was established by crossing over common plot elements, settings, cast, and characters that span across four live-action television series and two animated series.

DC's Legends of Tomorrow, or simply Legends of Tomorrow, is an American superhero television series developed by Greg Berlanti, Marc Guggenheim, Andrew Kreisberg, and Phil Klemmer, who are also executive producers along with Sarah Schechter and Chris Fedak; Klemmer and Fedak serve as showrunners. The series, based on the characters of DC Comics, airs on The CW and is a spin-off featuring characters introduced in Arrow and The Flash along with new characters, set in the Arrowverse, the same fictional universe. The series premiered in January 2016. Legends of Tomorrow has been renewed for a fourth season which premiered on October 22, 2018. On January 31, 2019, The CW renewed the series for a fifth season.

Phil Klemmer is an American television writer and producer.

The first season of the American television series Legends of Tomorrow, which is based on characters from DC Comics, premiered on The CW on January 21, 2016 and ran for 16 episodes until May 19, 2016. The season follows a group of heroes and villains who are called to travel through time in order to fight a greater threat. It is set in the Arrowverse, sharing continuity with the other television series of the universe, and is a spin-off of both Arrow and The Flash. The season is produced by Berlanti Productions, Warner Bros. Television, and DC Entertainment, with Phil Klemmer and Chris Fedak serving as showrunners.