Kevin Edward Watson (born 3 January 1974) is a former professional footballer, turned coach and sports broadcaster who is currently the manager of Billericay Town.

Watson started his career as a trainee with his local side Tottenham Hotspur. Watson scored his only Spurs goal on his debut in a League Cup tie against Brentford. [2] As a youngster his first-team opportunities were limited and he went out on loan to several sides to build his experience, namely Brentford, Bristol City and Barnet.

In 1996, he was signed by Swindon Town manager Steve McMahon. Newly promoted to second tier of the English Football League – Watson helped them avoid relegation.

Watson moved on to Rotherham United in July 1999, astute Millers' manager Ronnie Moore signing him on a free transfer. In his first season Watson helped Rotherham to promotion from League Two, narrowly missing out on the title.

Another promotion (and another title near miss) followed in the next season and Rotherham were promoted again into the Football League Championship. A key part of their rapid acceleration, Watson helped guide the team to survival by the narrowest of goal-difference margins.

After over 100 games at Rotherham his knack for promotions was spotted by then Reading manager Alan Pardew who at first, took Watson on loan before signing him permanently in March 2002 for £150,000 – where he promptly repeated the trick, guiding the Royals to promotion from League One, in his now customary second place.

His first full season at Reading saw the Royals into a play-off place, where narrow defeat to Wolves cost them a place in the Premiership. Perhaps tellingly Watson was on the bench for those key play-off games.

When former teammate Phil Parkinson was installed as manager at Colchester United one of his first acts was to bring Watson to Layer Road.

Marshalling the midfield Watson played a key role as in his (and Parkinson's) first full season the U's stormed to promotion from League One, finishing in second place.

Now with over 100 games for the U's under his belt he has been a key part of "The Best Col U ever" as the underdog U's finished their first season in the Football League Championship in 10th place.

He was released by Colchester at the end of the 2007–08 season, and then signed on a free transfer for Luton Town. [3] However, Watson failed to make an impact at Luton as a result of a knee injury that kept him out of action for much of his contract duration, and he was released at the end of 2008.

In 2015 whilst assistant manager of Stevenage, Watson alongside Stevenage manager Teddy Sheringham registered as players.

After his release from a playing contract at Luton, Watson was given the position of first-team coach by Luton manager Mick Harford on 14 January 2009. [4] After Harford's departure on 1 October 2009, Watson continued in his coaching capacity under new boss Richard Money until May 2010, when he left the club. [5]

Following the departure of Aidy Boothroyd from Colchester United to take the manager's job at Coventry City on 20 May 2010, Watson expressed an interest in taking up the vacant managerial position at his former club. [6]

In May 2015 he was appointed manager of Maldon & Tiptree [7] However, Watson left the club after only eleven days to take up the position of assistant manager to Teddy Sheringham at Stevenage. He left his position in February after Teddy Sheringham's departure. From July 2015 to November 2015, he worked at the academy of Colchester United.

On 28 June 2018, Watson was appointed assistant manager of Hungerford Town. [11] He left the club on 2 October to join Ebbsfleet United as a first-team coach. [12] However, only eight days later, he was appointed caretaker after manager Gary Hill's departure. After a three-game unbeaten run the club confirmed, that Watson had been appointed to the manager's job on a permanent basis. [13] Watson left the club at the end of his contract in May 2020. [14]

On 7 January 2021 Watson was announced as the new manager of National League South side Billericay Town. [15]

Watson has been involved in greyhound racing, pairing up with Tottenham Hotspur teammate Stuart Nethercott to buy Elegant Brandy, who won the 1995 Grand National. [16]

Kevin Patrick Blackwell is an English former professional football goalkeeper who since retiring as a player has worked as a coach and a manager. 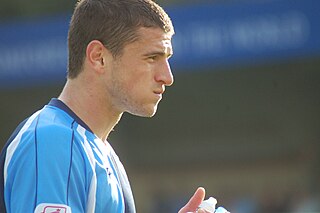 John Michael Lewis Mousinho is an English professional footballer who plays as a defender for League One club Oxford United.

Paul John Buckle is an English football manager. He is currently a Technical Advisor at Hartford Athletic of the USL and Technical Advisor to Landon Donovan at San Diego Loyal. Prior to this, he coached the U23s for Southampton FC of the Premier League. He has previously been the manager of Torquay United, Bristol Rovers, Luton Town, Cheltenham Town and Sacramento Republic.

Kevin Charles Dearden is an English former professional football who made more than 400 appearances in the Football League, playing as a goalkeeper for many clubs. He later became a coach, and is currently goalkeeper coach at his home-town club Luton Town.

Graham Mark Benstead is a retired professional football goalkeeper who made over 110 appearances in the Football League for Brentford. He also played league football for Sheffield United, Colchester United, Norwich City and was capped by England at youth and semi-pro level. Benstead is currently goalkeeping coach at Frimley Green. 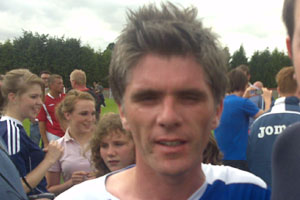 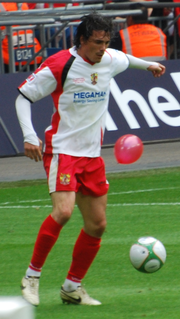 Ronnie Stephen Henry is an English professional footballer who plays as a defender for National League South club Billericay Town. He was the first player to lift a competitive trophy at the new Wembley Stadium, as captain of Stevenage in May 2007. Henry is Stevenage's all-time record appearance holder.

Mark Anthony Hughes is a retired footballer who is currently assistant manager at Billericay Town.

John Brian Dreyer is an English former professional footballer who played in defence and midfield. After retiring, he became a manager.

Lawrie Robert Wilson is an English footballer who plays as a right-back for National League South club Billericay Town.

The 2008–09 season was Colchester United's 67th season in their history and first season back in the third tier of English football following relegation, League One. Alongside competing in League One, the club also participated in the FA Cup, the League Cup and the Football League Trophy.

The 2015–16 season was Ipswich Town's 14th consecutive season in the second tier of English football and 138th year in existence. Along with competing in the Championship, the club also participated in the FA Cup and League Cup. The season covered the period from 1 July 2015 to 30 June 2016.

Darren Sarll is an English professional football manager and coach who is manager of Yeovil Town. He began his career in football as a midfielder in non-league football and entered management with Stevenage in 2016.

Obafemi Karl "Femi" Akinwande is a professional footballer who plays as a striker for Dartford, on loan from League Two club Stevenage.