Kiwi! is a 2006 computer-generated animation created by Dony Permedi, a student in the New York City School of Visual Arts, as his Master's Thesis Animation, with music composed and performed by Tim Cassell. The animation's story of a kiwi that aspires to fly created a major Internet phenomenon after it was hosted on the video sharing site YouTube. Unofficial versions of the video pair it with Mad World by Gary Jules. These versions became popular viral videos.

The video itself centers around a kiwi bird who is mysteriously seen to be nailing an array of trees to the side of a sheer cliff so that they stick out horizontally. After the kiwi finishes it returns to the top of the cliff, before donning an aviator's cap and suddenly jumping off. As it dives down the cliff head-first the camera view turns sideways, revealing the purpose behind the kiwi's efforts. A tear wells from one eye as the kiwi achieves its dream, flapping its tiny wings as it "flies" above the forest of trees. The kiwi then disappears into the fog below, and a distant thud is heard.

Kiwi! has received a large following for its deep meaning and heart touching manner. One of the most popular activities in the fan base is to create an alternate ending (usually one where the kiwi survives). As of May 27,2017 [update] , the animation has been viewed over 41 million times. It won official recognition on March 26, 2007 when viewers voted it the Most Adorable video of 2006 in the first annual YouTube Video Awards. [1] This was an event large enough to draw international media attention [2] [3] [4] with ABC News describing Kiwi! as "so cute it hurts" [2] while the International Herald Tribune , critical of the awards, characterized the video as being "sweet but dull." [4]

Aardman Animations, Ltd. is a British animation studio based in Bristol. Aardman is known for films made using stop-motion clay animation techniques, particularly those featuring Plasticine characters Wallace and Gromit. After some experimental computer animated short films during the late 1990s, beginning with Owzat (1997), it entered the computer animation market with Flushed Away (2006). Aardman films have made $1 billion worldwide and average $147 million per film. All of their stop motion films are among the highest-grossing stop-motion films, with their debut, Chicken Run (2000), being their top-grossing film as well as the highest-grossing stop-motion film of all time.

A viral video is a video that becomes popular through a viral process of Internet sharing, typically through video sharing websites such as YouTube as well as social media and email.

JerryC, also known by his English name Jerry Chang, is a Taiwanese guitarist and composer. He is known for arranging and playing "Canon Rock", a rock arrangement of Johann Pachelbel's Canon in D. He began playing the guitar at the age of 17, and the piano before age 15. His style is influenced by classical music, neoclassical guitarists, as well as metal bands such as Helloween and Metallica and Japanese rock bands such as B'z and L'Arc-en-Ciel.

Lasse Gjertsen is a Norwegian animator, musician, and videographer. He is best known for his short pieces "Hyperactive" and "Amateur", big hits in the early years of YouTube, which strung together short clips of video to create a unique form of video akin to stop-motion animation. His "Hyperactive" video has over 8.5 million views and his "Amateur" video has over 15 million views.

Ben Going, username boh3m3 on YouTube, is a video blog personality based in Torrance, California. He was fairly popular on YouTube in 2006 and into 2007, and an early YouTube partner. 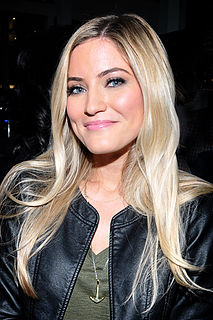 Justine Ezarik is an American YouTube personality, host, and actress. She is best known as iJustine, with over a billion views across her YouTube channels since 2006. She gained attention as a lifecaster who communicated directly with her millions of viewers on her Justin.tv channel, ijustine.tv. She acquired notability in roles variously described as a "lifecasting star", a "new media star", or one of the Web's most popular lifecasters. She currently posts videos on her main channel iJustine.

Kevin 'Nalts' Nalty is a YouTube comedian and partner based in Doylestown, Pennsylvania better known under his YouTube username Nalts. Nalts began on YouTube as one of the top-20 most-viewed comedy channels, and collaborates with many of today's top YouTube personalities. He has more than 1,000 videos which, as of April 18, 2016, have been viewed more than 297 million times on YouTube alone. He has been ranked as one of YouTube's Most Subscribed users. He is the author of "Beyond Viral: How to Attract Customers, Promote Your Brand, and Make Money with Online Video . Nalty speaks at marketing conferences and events, and spoke about "viral video" in Boston at the 2011 International Society for Humor Studies conference in Boston. He is listed in the "Who's Who in the World of Video Marketing." 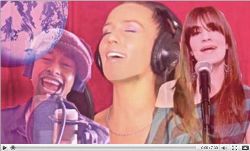 "We Are the World 25 for Haiti " is a collaborative charity song and music video produced by singer-songwriter Lisa Lavie and posted to the YouTube video sharing website to raise money for victims of the January 12, 2010 Haiti earthquake. 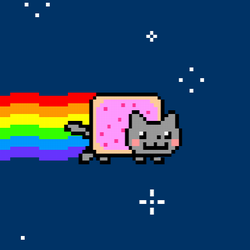 Nyan Cat is the name of a YouTube video uploaded in April 2011, which became an internet meme. The video merged a Japanese pop song with an animated cartoon cat with a Pop-Tart for a torso, flying through space, and leaving a rainbow trail behind it. The video ranked at number 5 on the list of most viewed YouTube videos in 2011. 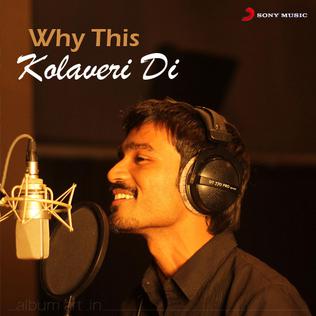 'Why This Kolaveri Di' is a song from the soundtrack of the 2012 Tamil psychological thriller film, 3. The song is written and sung by Dhanush, and composed by Anirudh Ravichander. It became one of the most streamed songs of all-time.

Universal Animation Studios, formerly known as Universal Cartoon Studios, is an American animation studio which is a division of Universal Pictures. It has produced sequels to Universal-released feature films, such as The Land Before Time, An American Tail, Balto, as well as other films and television series.

The musical rock band OK Go has earned considerable fame for their creative but often low-budget music videos, most of which have been promoted through Internet video sharing sites like YouTube. Many of these have become viral videos; the 2006 video for "Here It Goes Again", in which the band performed a complex routine with the aid of motorized treadmills, has received over 50 million views four years later. Their video for Needing/Getting, released February 5, 2012 in partnership with Chevrolet, debuted during Super Bowl XLVI and has over 32 million views on YouTube. Samuel Bayer, who produced many music videos in the 1990s, asserted that OK Go's promotion of music videos on the Internet was akin to Nirvana's ushering in the grunge movement. Many of the videos also use long or single-shot takes, which Salon's Matt Zoller Seitz says "restore[s] a sense of wonder to the musical number by letting the performers' humanity shine through and allowing them to do their thing with a minimum of filmmaking interference". The success of OK Go's music first won the band the 14th Annual Webby Special Achievement Award for Film and Video Artist of the Year. The video for "This Too Shall Pass" was named both "Video of the Year" and "Best Rock Video" at the 3rd annual UK Music Video Awards."This Too Shall Pass" won the LA Film Fest's Audience Award for Best Music Video, UK MVA Awards – Music Video of the Year Winner 2010, among others. 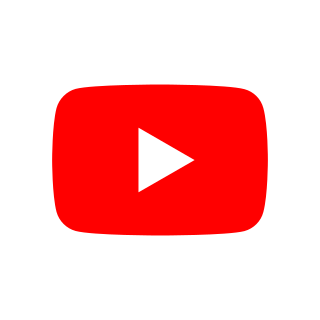 Pinkfong is the children's educational brand of SmartStudy, a South Korean educational entertainment company. Pinkfong consists of mainly children's songs, of which the most famous is "Baby Shark", with more than four billion views on YouTube. Their educational channel has more than 20 million subscribers, with a brightly-colored programming of stories, sing-along songs and dances represented by a pink fox named "Pinkfong". The global product development company has more than 4,000 children's videos, songs, games and apps.