After George Herriman conceived the Krazy Kat comic strip in 1913, the title character began appearing in animated shorts three years later. From 1916 to 1940, Krazy Kat was featured in 231 films. [1] The following is a list of the cartoons released theatrically, separated by studio.

In the first two seasons of the cartoon series, Krazy was depicted as a genderless feline, similar to the comic strip. From here onward, he is portrayed as a male cat.

By this period, the Krazy Kat shorts started using sound. Every film here was directed by Manny Gould and Ben Harrison. Most of these shorts are available in several volumes of the Columbia Cartoon Collection. Mintz Studio became Screen Gems in 1933. Due to waning popularity, the Krazy Kat series ended, but he would appear in two more shorts in the Fables and Phantasies series.

George Joseph Herriman was an American cartoonist best known for the comic strip Krazy Kat (1913–1944). More influential than popular, Krazy Kat had an appreciative audience among those in the arts. Gilbert Seldes' article "The Krazy Kat Who Walks by Himself" was the earliest example of a critic from the high arts giving serious attention to a comic strip. The Comics Journal placed the strip first on its list of the greatest comics of the 20th century. Herriman's work has been a primary influence on cartoonists such as Will Eisner, Charles M. Schulz, Robert Crumb, Art Spiegelman, Bill Watterson, and Chris Ware.

Animated films in the United States date back to at least 1906 when Vitagraph released Humorous Phases of Funny Faces. Although early animations were rudimentary they rapidly became more sophisticated with such classics as Gertie the Dinosaur in 1914, Felix the Cat, and Koko the Clown. 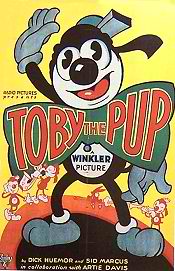 Toby the Pup is an animated cartoon character created by animators Sid Marcus, Dick Huemer, and Art Davis. He starred in a series of early sound shorts produced by Charles B. Mintz for RKO Radio Pictures. The series lasted from 1930 to 1931. Twelve cartoons were produced, though only seven still survive today. Krazy Kat is an American newspaper comic strip by cartoonist George Herriman, which ran from 1913 to 1944. It first appeared in the New York Evening Journal, whose owner, William Randolph Hearst, was a major booster for the strip throughout its run. The characters had been introduced previously in a side strip with Herriman's earlier creation, The Dingbat Family. The phrase "Krazy Kat" originated there, said by the mouse by way of describing the cat. Set in a dreamlike portrayal of Herriman's vacation home of Coconino County, Arizona, KrazyKat's mixture of offbeat surrealism, innocent playfulness and poetic, idiosyncratic language has made it a favorite of comics aficionados and art critics for more than 80 years.

The Hearst-Vitagraph News Pictorial or Hearst-Vita graph was a short-lived company producing newsreels which were coupled with animated cartoons. It was established on 29 October 1915 by the Brooklyn-based Vitagraph Studios and the Hearst Corporation, and produced its first reel in February 1916, but folded in 1916. Previously, Hearst had produced newsreels together with the Selig Polyscope Company from 1914 on, and after the deal with Vitagraph ended Hearst teamed up with Pathé.

The Apache Kid is a 1930 cartoon short distributed by Columbia Pictures and features Krazy Kat. The film is the character's 149th film.

The Mouse Exterminator is a 1940 short animated film in the Phantasies series, produced and distributed by Columbia Pictures. It marks the final theatrical appearance of Krazy Kat, the title character from George Herriman's comic strip.

Krazy Kat and Ignatz Mouse: A Duet, He Made Me Love Him, also simply known as A Duet, is a 1916 silent short animated film featuring Krazy Kat. It is among the earliest cartoons to feature Krazy who earlier achieved modest success through comic strips.

Krazy Kat & Ignatz Mouse Discuss the Letter 'G' is a 1916 silent short animated film featuring the comic strip character Krazy Kat. As with other animated shorts at the time, it was featured as an extra along with news reports that were released on film.

Jazz Rhythm is a 1930 short animated film distributed by Columbia Pictures. The film is part of a series featuring the comic strip character Krazy Kat.

Railroad Rhythm is a 1937 short animated film by Columbia Pictures starring the comic strip character Krazy Kat, and part of a long-running series of short films featuring the character.

The Dingbat Family is a comic strip by American cartoonist George Herriman that ran from June 20, 1910, to January 4, 1916. It introduced Herriman's most famous pair of characters: Krazy Kat and Ignatz Mouse, who later featured in Herriman's best-known strip Krazy Kat (1913–1944).