L'Usine nouvelle is a weekly French business magazine that covers business and technology. It is based in Antony, Hauts-de-Seine near Paris.

This trade magazine appeared for the first time on 5 December 1891 in Charleville in the Ardennes department in northeastern France with the title l'Usine, subtitled "Organe de l'industrie des Ardennes et du Nord-Est" ("Organ of Industry of the Ardennes and the North-East"). It was published with the encouragement of a regional trade association, the Syndicat des industriels métallurgiques ardennais. [1] And an editorial was specific: "L'Usine hopes to become the organ for everyone who has at heart the prosperity of the industries of the Ardennes and their expansion." It was a newspaper conceived entrepreneurs for entrepreneurs. It was an information tool to help them act and make decisions, and a communications tool and source of advertising for managers. [2] At that time, the Ardennes and the northeast of France were considered a favoured area for industrial development. [3]

In 1905, it was bought by Camille Didier, who had become its publisher in 1901 at the age of 26 and who had opened an office in Paris. Camille Didier sought to turn l'Usine into a nationally distributed magazine.

In 1914, the magazine had 3,000 subscribers. [1] In response to the invasion of France by Germany during World War I, the newspaper moved its office to Paris and remained there. In 1935, the magazine printed 35,000 copies of each issues and its office was at 15 de la rue Bleue.

At the outbreak of World War II, the magazine called on its readers to support the war effort. After Paris was occupied by German forces, the magazine continued to publish but limited itself to factual information such as commodity prices. At the time of the Liberation of Paris, its publisher (still Camille Didier) was accused of having collaborated with the enemy by continuing to publish during the German occupation. He was supported by his cousin Jeanne Carlot, a resistance figure in the Ardennes who had published an underground resistance newspaper named l'Ardenne.

After an interruption of 11 months, the magazine resumed publication in 1945 with a new name, l'Usine nouvelle. [4] The magazine grew during the Trente Glorieuses, the period of economic growth in France from 1945 until 1975. It became a jewel of the general trade press, with a strong position. [5] Camille Didier died in 1962, and his son, Édouard Didier, took over.

In 1968, its publication was interrupted by a strike by the C.G.T. trade union confederation at the printing plant in Montrouge. In 1970, the Didier family sold the magazine to Havas. The editorial process was computerized in 1992 and a website was launched in 1998. Havas was acquired by Vivendi Universal. Vivendi Universal sold its trade and medical publishing businesses to a group led by Cinven in 2001, who created Approvia. [6] [7] Approvia sold Groupe Moniteur, of which L'Usine nouvelle was a part, to Sagard in 2004. In 2006, Groupe Moniteur was sold to Bridgepoint Capital. [8] In 2013, Bridgepoint sold Groupe Moniteur to Infopro Digital, then owned by Apax Partners. [9] TowerBrook Capital Partners acquired Infopro Digital. TowerBrook Capital Partners acquired Infopro Digital from Apax in 2016. [10]

Usinenouvelle.com is a site for business and industrial news, republishing articles from the L’Usine nouvelle magazine and from other sources such as wire services. It received an award from the Palmarès de la Presse Professionnelle for the best Internet site in 2003.

The Institut supérieur de l'aéronautique et de l'espace, is one of the most prestigious French universities in engineering founded in 1909. It was the world's first dedicated aerospace engineering school and is considered to be one of the best in Europe in that field. The school delivers a range of science and engineering degree programs. ISAE-SUPAERO is part of University of Toulouse, ISSAT, PEGASUS, GEA, Toulouse Tech, CESAER and Aerospace Valley.

Dalloz is a French publisher that specializes in legal matters and is France's main legal publisher. It was founded by Désiré Dalloz and his brother Armand in 1845. Dalloz was acquired by Groupe de La Cite in 1989. CEP acquired almost complete control of Groupe de La Cite in 1995. Havas acquired full ownership of CEP in 1997 and In 1998, Havas was acquired by the company that became Vivendi. Presses de la Cité became part of Vivendi Universal Publishing (VUP), which in 2002 was sold to Hachette Group.

Masson was a French publisher specialised in medical and scientific collections. In 1987, Masson purchased Armand Colin. In turn, it became part of the City Group in 1994. In 2000, Groupe de la Cité became part of Vivendi Universal Publishing (VUP). VUP sold its medical and trade publishing to a group led by Cinven in 2002, who formed MediMedia. In 2005, MediMedia sold its European and U.S. Netter professional medical publishing businesses to Reed Elsevier. Masson merged with Elsevier France, creating Elsevier Masson. 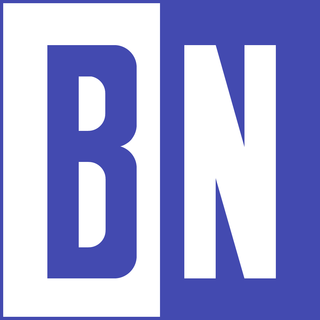 Brandt is a French brandname producing various home equipment, created in 1924 by Edgar Brandt as a part of Hotchkiss-Brandt. Today, the company currently is owned by Cevital.

Supméca is a French mechanical engineering school. The school is an active member of the Polyméca network and part of the ENSI school group as well as the ISAE Group. According to the 2016 rankings of French Magazine L'Usine nouvelle, Supméca is ranked among the 10 best engineering schools in the fields of mechanics, aeronautics, automobile, transport and materials.

The INSEEC Business School is an AMBA-acrredited Grande Ecole and French Business School, renamed INSEEC School of Business and Economics since 2019, with French, European and international campuses in Paris, Bordeaux, Lyon, Chambéry, London, Monaco, Geneva, Abidjan and Shanghai as well as San Francisco.

Le Moniteur des travaux publics et du bâtiment is a French weekly magazine covering construction systems and architecture. Founded in 1903 by Louis Dubois and a publishing house, it now belongs to Infopro Digital, a company owned by TowerBrook Capital Partners. The magazine's headquarters are in Paris.

Plon is a French book publishing company, founded in 1852 by Henri Plon and his two brothers. The Plon family were Walloons coming from Nivelles, Belgium. One of their ancestors is probably the Danish typographer Jehan Plon who lived at the end of the 16th century.

Doux Group, founded in 1955 and headquartered in Châteaulin, Finistère (France), is a French food processing company in the industrial poultry production business, exporting poultry-based processed products. In 2014, it was ranked as the largest producer of poultry in Europe, and the third largest in the world. The group is led by Arnaud Marion, who has been the CEO of Doux since late 2012. 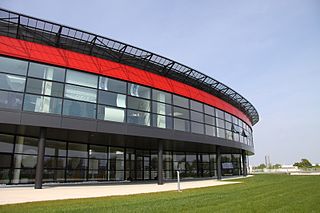 Evolis is a French company, which develops, manufactures, and sell printers and software for personalized and decentralized printing of plastic cards. Their headquarters and the production facility are located near Angers, France.

Safran Electronics & Defense, formerly known as Sagem Défense Sécurité, is a French company specializing in optronics, avionics and electronic systems, as well as software for civil and military applications in the naval, aeronautical and space sectors. It is one of the ten entities that make up the Safran Group.

Yves Bonnefont is a French industrialist and business leader. He was born on 18 December 1970 in Boulogne-Billancourt. He was Chief Executive Officer of DS Automobiles, the new premium brand of Groupe PSA that he founded in 2015 with his team until January 2020. Yves Bonnefont is now leading a study on potential synergies within a portfolio of brands for Groupe PSA.

Angélique Gérard born 13 June 1975 in the commune of Fontainebleau in the metropolitan area of Paris, is a French businesswoman and writer.