Lundgaard & Tranberg Arkitekter is a Danish architectural firm, based in Copenhagen Denmark. It is most noted for the Tietgenkollegiet student housing in Ørestad from 2006 and the Royal Danish Playhouse on the Copenhagen harbourfront from 2008. Lundgaard & Tranberg has won RIBA European Awards three years in a row in 2006, 2007 and 2008. [1] [1] [2]

Lundgaard & Tranberg was founded in 1983 by Boje Lundgaard and Lene Tranberg. In the 1990s, the firm gained a reputation as designers of heat & power plant and other technical facilities, while its breakthrough in the general public came in the mid-2000s with the Charlottehaven from residential project from 2004 and particularly the award-winning and highly celebrated designs for the Tietgenkollegiet student residences and a new building for the Royal Danish Theater. In 2004, just when the firm's major success set in, Boje Lundgaard departed, and Lene Tranberg continued the practice with a new partner group.

The following lists events hat happened during 2006 in Denmark.

Cobe is a Copenhagen-based architectural firm founded in 2006 by architect Dan Stubbergaard. As of 2020, the office has 150 employees and is involved in a large number of projects throughout Europe and North America within urban planning, architecture, landscape architecture and interior design. 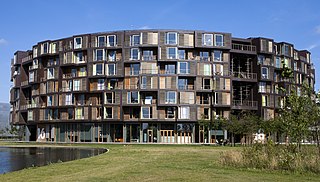 Tietgenkollegiet, named for Danish financier C.F. Tietgen (1829-1891), is a student residence located in the Ørestad district of Copenhagen, Denmark. 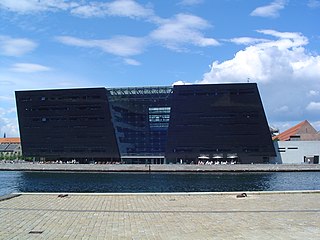 Schmidt Hammer Lassen Architects (SHL) is an international architectural firm founded by a group of Danish architects in 1986 in Aarhus, Denmark. It currently has three offices in Copenhagen and Aarhus in Denmark, and Shanghai, China.

The architecture of Copenhagen in Denmark is characterised by a wide variety of styles, progressing through Christian IV's early 17th century landmarks and the elegant 17th century mansions and palaces of Frederiksstaden, to the late 19th century residential boroughs and cultural institutions to the modernistic contribution of the 20th century such as Arne Jacobsen's National Bank and SAS Royal Hotel.

Julien De Smedt is the founder and director of JDS Architects based in Brussels, Copenhagen, Belo Horizonte and Shanghai. Projects include the VM Housing Complex, the Mountain Dwellings, the Maritime Youth House and the Holmenkollen Ski Jump.

The Royal Danish Playhouse is a theatre building for the Royal Danish Theatre, situated on the harbour front in the Frederiksstaden neighbourhood of central Copenhagen, Denmark. It was created as a purpose-built venue for dramatic theatre, supplementing the theatre's old venue from 1874 on Kongens Nytorv and the 2004 Copenhagen Opera House, which are used for ballet and opera.

Events from the year 2007 in Denmark.

Entasis is a Danish architecture firm based in Copenhagen. It takens its name from the Greek word for tension.

Stig Lennart Andersson usually referred to as Stig L. Andersson, is a Danish landscape architect, founder and Creative Director of Copenhagen-based SLA which has developed into an interdisciplinary organisation working with landscape, urban spaces and urban planning.

Kalvebod Brygge is a waterfront area in the Vesterbro district of Copenhagen, Denmark. The name also refers to a section of the Ring 2 ring road which follows the waterfront from Langebro in the north to the H. C. Ørsted Power Station in the south. The area is dominated by office buildings, Tivoli Conference Center, several hotels and the shopping centre Fisketorvet.

Sorø Art Museum is an art museum located in Sorø, Denmark. It displays a representative collection of Danish art as well as a collection of Russian art, covering both painting from 1870 to 1930 and Russian icons, and also hosts special exhibitions both of classical and contemporary art. The museum is housed within a listed Neoclassical house, part of a traditional Danish market town setting along Sorø's main street, which was expanded by the architects Lundgaard & Tranberg in 2011, tripling its size.

Vilhelm Lauritzen Architects (VLA) is an architectural firm based in Copenhagen, Denmark. It was founded by Vilhelm Lauritzen, who headed the firm from its foundation in 1922 until 1969.

Havneholmen is a mixed-use development located on reclaimed land off Kalvebod Brygge in the harbor of Copenhagen, Denmark. It is located just east of the shopping centre Fisketorvet from which it is separated by a narrow canal, although it is annexed to mainland Kalvebod Brygge at its southern end.