Mariam Mahamat Nour is a politician and economist in the Republic of Chad.

Nour has been Secretary General of the Government and minister responsible for relations with parliament since May 7, 2018.

Haroun Kabadi is a Chadian politician. He was Prime Minister of Chad from June 2002 to June 2003 and has been President of the National Assembly of Chad since June 2011.

The Ordre des Arts et des Lettres is an order of France established on 2 May 1957 by the Minister of Culture. Its supplementary status to the Ordre national du Mérite was confirmed by President Charles de Gaulle in 1963. Its purpose is the recognition of significant contributions to the arts, literature, or the propagation of these fields.

The Government of Chad has been ruled and controlled by Idriss Déby and his Patriotic Salvation Movement since December 2, 1990, and officially since February 28, 1991. An amendment to the Constitution of Chad, passed in 2005, allowed Déby to run for his next term which will be his third. He ran for it and won, although the election was criticized harshly..

Catherine Jeanne Cesarsky is an Argentine and French astronomer, known for her successful research activities in several central areas of modern astrophysics. She was formerly president of the International Astronomical Union (2006-2009) and the director general of the European Southern Observatory (1999–2007). In 2017 she became Chairman of the Board of the Square Kilometre Array radio telescope project.

This is a list of the ribbons of the French military and civil awards. 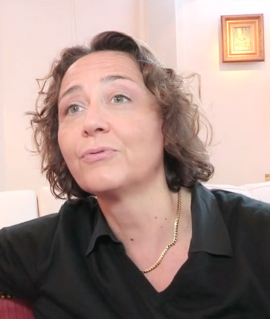 Nathalie Stutzmann is a French contralto and conductor.

The Ordre de l'Étoile d'Anjouan was a French colonial order of knighthood founded in 1874. It was established in 1874 by sultan Mohamed-Saïd-Omar of the Comoros island of Anjouan, reorganised on 18 June 1892 and authorised and recognised by the French government on 12 September 1896. It was made a French Overseas Order in 1950.

The Order of the Black Star was an order of knighthood established on 1 December 1889 at Porto-Novo by Toffa, future king of Dahomey. Approved and recognised by the French government on 30 July 1894, after the establishment of the new statutes of 30 August 1892, according this distinction to all those who worked to develop French influence on the west coast of Africa.

Georges Patient is a member of the Senate of France, representing the territory of French Guiana. Since 2017, he has been affiliated with the La République En Marche (LREM) parliamentary group. He previously served as the Mayor of Mana from 1989 to 2017.

Louis-Gaston Mayila is a Gabonese politician. He is the President of the Union for the New Republic (UPRN), a political party. 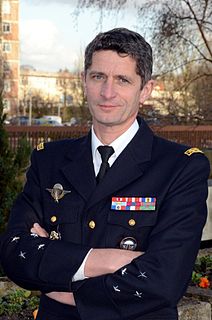 General Denis Favier is, from 2013 to 2016, the General-Director of the French Gendarmerie.Denis Favier was born on 18 May 1959 in Lons-le-Saunier.In 1979 he joined the military academy of Saint-Cyr.In 1992 he was appointed commander of the National Gendarmerie Intervention Group (GIGN). In 1994 he was promoted to chef d'escadron (major).In 1994 he commanded the assault against the terrorists who had taken the passengers of Air France Flight 8969 hostage. Following this incident, he gave interviews in silhouette or facial obscurity, which he still does until today as it was believed that the co-militants of the terrorists his team killed offered a reward for his assassination.In 2007, after various positions in the Gendarmerie, he was again appointed commander of the GIGN, which underwent restructuring. In 2008 he joined the French forces leading the assault on the pirates who had captured the ship Ponant near Somalia.In 2008 he was appointed general. In 2013 he was appointed director-general of the Gendarmerie.On 9 January 2015 he led the operation to arrest Chérif and Saïd Kouachi following a hostage situation at a printing company in the town of Dammartin-en-Goële. The Kouachi brothers were suspected of being the perpetrators of the shooting at Paris newspaper Charlie Hebdo on 7 January 2015.

Admiral Georges Cabanier was a French Naval Officer and Admiral, in addition to Grand Chancellor of the Legion of Honour.

The Ordre du Mérite militaire was a ministerial order of merit of France created on 22 March 1957 to recognize the contributions of active members of the military reserves during times of peace. The order was administered and awarded the Ministry of Defence. The order was created to replace the Croix des services militaires volontaires established in 1934. Holders of the Cross were made members of the Ordre du Mérite militaire, bronze holders as knights, silver holders as officers, and gold holders as commanders.

The Ordre du Mérite combattant was a ministerial order of merit of France created on 14 September 1953 to reward individuals who distinguished themselves by their service and dedication in the management of the moral and material interests of veterans and war victims. These individuals' applicable service could be working in the Ministry of Veterans and War Victims or for organizations and associations who work for veterans. The order was administered and awarded the Ministry of Veterans and War Victims.

Chad–Mexico relations refers to the diplomatic relations between the Republic of Chad and the United Mexican States. Both nations are members of the United Nations.

Benjamin Mouton is a French architect. He is architecte en chef des monuments historiques and until 2013 was inspector general of historic monuments.

Moustapha Sourang was a Senegalese politician.