Mark Perry is a British writer and musician, and former fanzine publisher.

Perry was a bank clerk when, inspired by The Ramones, he founded the punk fanzine Sniffin' Glue (And Other Rock 'n' Roll Habits) in 1976. Publication ceased in August 1977 when he founded the band Alternative TV. [1]

Alex Fergusson left the band due to "musical differences" prior to the band releasing their first album, The Image Has Cracked (1978). [2]

Perry went on to perform with The Good Missionaries, The Reflections, and The Door and the Window. [2] In the 1990s, he was involved with Baby Ice Dog. Alternative TV have played occasional gigs in recent years, both in the United Kingdom and the United States.[ citation needed ] 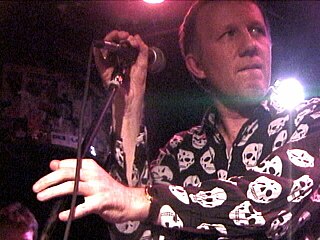 Alternative TV are an English band formed in London in 1977. Author Steve Taylor writes: "Alternative TV pioneered reggae rhythms in punk and then moved on to redefine the musical rules".

Sniffin' Glue and Other Rock 'N' Roll Habits..., widely known as simply Sniffin' Glue, was a monthly punk zine started by Mark Perry in July 1976 and released for about a year. The name is derived from a Ramones song "Now I Wanna Sniff Some Glue." Some of the zine's writers, such as Danny Baker, later became well-known journalists. 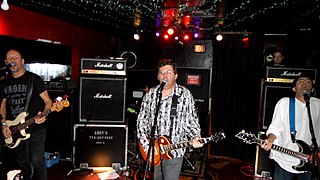 Stiff Little Fingers are an Irish punk rock band from Belfast, Northern Ireland. They formed in 1977, at the height of the Troubles. They started out as a schoolboy band called Highway Star, doing rock covers, until they discovered punk. They were the first punk band in Belfast to release a record - the “Suspect Device” single came out on their own independent label ‘Rigid Digits’. Their album Inflammable Material, released in partnership with Rough Trade, became the first independent LP to enter the UK top 20.

Rough Trade Records is an independent record label based in London, England. It was formed in 1978 by Geoff Travis who had opened a record store off Ladbroke Grove. Having successfully promoted and sold records by punk rock and early post-punk and indie pop bands such as the Normal and Desperate Bicycles, Travis began to manage acts and distribute bands such as Scritti Politti and began the label, which was informed by left-wing politics and structured as a co-operative. Soon after, Rough Trade also set up a distribution arm that serviced independent retail outlets across Britain, a network that became known as the Cartel. In 1983, Rough Trade signed the Smiths.

Vic Godard is a British singer-songwriter formerly of the punk group Subway Sect. He is now also a solo performer, while continuing to appear with various incarnations of Subway Sect.

Illegal Records was an independent record label, founded in 1977 by Miles Copeland III with his younger brother Stewart Copeland and the manager of The Police, Paul Mulligan. The label released The Police's debut single, "Fall Out".

Here & Now are an English psychedelic/space rock band formed in early 1974. They have close connections with the band Gong and in 1977/1978 worked with Gong's Daevid Allen and Gilli Smyth under the name Planet Gong. 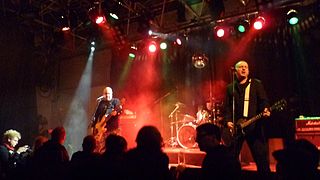 999 are an English punk rock band, formed in London in December 1976. From the period of 1976 to 1985, the line-up of 999 consisted of Nick Cash, Guy Days, Jon Watson and Pablo LaBrittain (drums). LaBrittain was temporarily replaced in 1980 by drummer Paul Edward aka 'Ed Case' while he recovered from a motor accident. Bassist Jon Watson left the band in 1985 and was replaced by Danny Palmer, who was succeeded by Arturo Bassick in 1991.

Flipside, originally known as Los Angeles Flip Side, was a punk zine published in Whittier and Pasadena, California, from 1977 to 2000. The magazine was associated with its own record label, Flipside Records, releasing vinyl records and compact discs beginning in 1978.

"Suicide Alley" is the debut single by Welsh alternative rock band Manic Street Preachers. It was self-financed and released in 1988, while they were still an unsigned act.

"Now I Wanna Sniff Some Glue" is a song by the Ramones from their eponymous debut album.

Life is a Grand... is the only full-length release from multi-instrumentalist, songwriter, composer Henry Badowski.

Really Red was one of Houston, Texas' first punk bands and existed from the late 1970s through 1985.

Henry Badowski is a British multi-instrumentalist, songwriter, and composer, who was a member of several punk rock bands in the 1970s before embarking on a solo career.

The Flys were a British punk rock band that originally formed in 1976 in Coventry, England. After the self-release of their initial EP, Bunch of Fives, they were signed by EMI Records. With EMI they released the albums Waikiki Beach Refugees and Own. In 1980 they changed labels to Parlophone but soon disbanded. 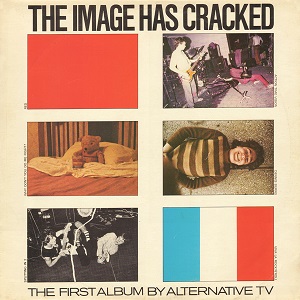 The Image Has Cracked is the debut studio album by English band Alternative TV. It was released in May 1978 by record label Deptford Fun City.

Vibing Up the Senile Man is the second studio album by English rock band Alternative TV, released in March 1979 by record label Deptford Fun City. On this album, the band followed an even more experimental and avant-garde approach than on The Image Has Cracked (1978).