Megan Fisher (born March 1, 1983) is a Canadian-American Paralympic athlete. She has won one gold, two silver, and one bronze medal for Team USA at the Paralympic Games.

Fisher grew up as an only child near Calgary, Alberta. After her parents separated, she moved to Hinsdale, Illinois, with her mother and divided her time with her father. [1]

Fisher was a walk-on at the University of Montana's NCAA Division 1 tennis team, which she played during her freshman year. [2] [3] While driving with her friend back to school for their sophomore year on June 30, 2002, they were both injured in a car accident. After being pulled out of the car by a witness, Fisher's left leg was amputated; her friend died due to her injuries. [2] Less than a year after the accident, Fisher returned to the University of Montana and competed in a triathlon following a second leg surgery. [2]

Fisher met Paralympic cyclist Sam Kavanaugh, who inspired her to begin competing in para-cycling and eventually the USA Paralympic team. [4] In 2010, Fisher competed in the TRI-5 classification and won the International Triathlon Union Paratriathlon World Championship in Budapest, Hungary, and won the 2010 USA Paratriathlon National Championship in the TRI-5 division. [4] She also became the first female lower-leg amputee to complete an XTERRA off-road triathlon. [5]

Prior to leaving for the 2012 Summer Paralympics, Fisher began studying for her doctorate in physical therapy at the University of Washington. [5] In London, she competed in Paralympic cycling, winning both a gold and silver medal. [6] Her gold medal came in the C4 time trial and her silver in the track pursuit. [7]

In 2016, Fisher was selected to compete with Team USA at the 2016 Summer Paralympics, where she won a silver medal after losing to teammate Shawn Morelli in the C4 road timed trial. [11] She also ended the games with a bronze medal in the 3000M individual pursuit. [12] 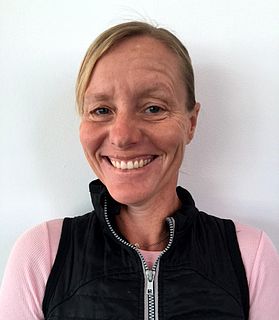 Michellie Yvonne Jones is an Australian triathlete. She has won two ITU Triathlon World Championships, an Olympic silver medal, and the 2006 Ironman World Championship. She won a gold medal at the 2016 Summer Paralympics as a guide for Katie Kelly, when paratriathlon made its debut at the Paralympics. 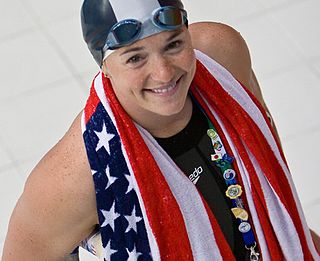 Melissa Stockwell is an American two-time Paralympian and former U.S. Army officer. Competing in the 2008 Summer Paralympics in three Paralympic Swimming events, she returned to race in the 2016 Paralympic Games and won a Bronze medal in the inaugural Paratriathlon event on September 11, 2016.

Catherine Mary Walsh is a visually impaired athlete from Ireland. She has competed internationally in both athletics and cycling, winning Paralympic medals in both.

Lindy Hou, OAM is an Australian tandem cyclist and triathlete from Hong Kong. Arriving in Australia with her family in 1974, she was diagnosed with retinitis pigmentosa in the mid-1980s and became legally blind in 1996. She has won six medals at the 2004 and 2008 Summer Paralympics.

Paratriathlon is a variant of the triathlon for athletes with a physical disability. The sport is governed by the International Triathlon Union (ITU), and was first held as a Paralympic event at the 2016 Summer Paralympics in Rio de Janeiro, Brazil.

Carol Lynn Cooke, is a Canadian-born Australian cyclist, swimmer and rower. A keen swimmer, she was part of the Canadian national swimming team and was hoping to be selected for the 1980 Moscow Olympics before her country boycotted the games. She moved to Australia in 1994, was diagnosed with multiple sclerosis in 1998, and took up rowing in 2006, in which she narrowly missed out on being part of the 2008 Beijing Paralympics. She then switched to cycling, where she won a gold medal at the 2012 London Paralympics and two gold medals at the 2016 Rio de Janeiro Paralympics.

Karen Darke,, FRSGS is a British paralympic cyclist, paratriathlete, adventurer and author. She competed at the 2012 London Paralympics winning a silver medal in the Women's road time trial H1-2.

Rhiannon Henry is a Welsh swimmer, paracyclist and paratriathlete who has competed in the Paralympic Games on three occasions winning two medals in swimming events. She also won World and European Championship medals as a swimmer. However, after coming away from the 2012 Summer Paralympics in London without a medal, she switched to paracyling and joined the British Cycling Paralympic Academy programme, competing as a visually-impaired rider as part of a tandem pairing. She made her debut alongside Fiona Duncan at the 2013 Tandem Tour of Belgium, finishing sixth and helping teammates Lora Turnham and Corinne Hall to victory.

The United States competed at the 2016 Summer Paralympics in Rio de Janeiro, Brazil, from 7 September to 18 September 2016. The first places the team qualified were for three athletes in sailing events. They also qualified athletes in archery, goalball, shooting, swimming, and wheelchair basketball. 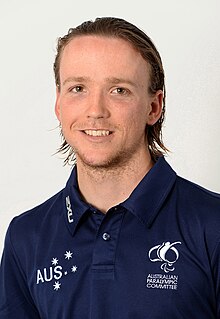 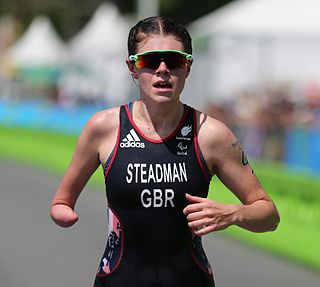 Kathleen Margaret "Katie" Kelly is an Australian paratriathlete, who has a degenerative disease known as Usher syndrome. Kelly began competing in the PT5 paratriathlon classification in February 2015 when her condition deteriorated to a legally blind state. She has just 30 per cent of her vision. With her guide Michellie Jones, Kelly won gold medals at the 2015 and 2017 ITU World Championships and 2016 Rio Paralympics.

Kate Doughty is an Australian paraequestrian and paratriathlete. She won a bronze medal at the 2015 World Triathlon Grand Final. She represented Australia at the 2016 Rio Paralympics when paratriathlon made its debut at the Paralympics. 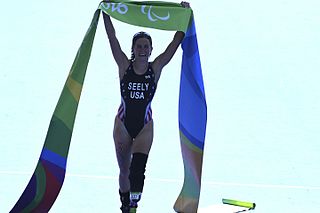 Allysa Seely is an American paratriathlete and gold medalist at the 2016 Summer Paralympics.

Nicolas Pieter du Preez is a South African athlete in paratriathlon. He was the first person with tetraplegia to ever finish an Ironman Triathlon in 2014. Du Preez started competing at the Berlin Marathon in 2008 and was a seven-time winner since 2012. In international events, Du Preez competed at the 2012 Summer Paralympics in the 100m event and won medals at the UCI Para-cycling Road World Championships from 2014 to 2018. Outside of his athletic career, Du Preez works in risk assessment as an analyst.

Jamie Whitmore Cardenas is a former American triathlete turned para-cyclist. Whitmore began her sports career competing in the XTERRA Triathlon throughout the 2000s. As a XTERRA triathlete, she won over thirty events and was the XTERRA world champion in 2004. After being diagnosed with spindle cell sarcoma in 2008, Whitmore moved to para-cycling in the 2010s and competed in championships held by the Union Cycliste Internationale. Since 2013, Whitmore has won twenty overall medals while competing at the UCI Para-cycling Road World Championships and UCI Para-cycling Track World Championships. After breaking the C3 world record in time trial and pursuit at the 2014 para-cycling track championships, Whitmore won gold in the road race and pursuit events at the 2016 Summer Paralympics. Apart from her medals, Whitmore was inducted into the XTERRA Hall of Fame in 2012 and was the winner of the Best Female Athlete with a Disability ESPY Award in 2014.