Prior to state sanctioning, weight classes were not mandatory since the competitions were held without the approval of the athletic commissions. For instance, the Ultimate Fighting Championship introduced two weight classes at UFC 12 : heavyweight, which grouped competitors above 200 lb (91 kg), and lightweight, which grouped competitors under 200 lb.

Weight classes underwent many changes in the ensuing years, but the ability of promotions to autonomously decide their own weight classes eventually disappeared after athletic commissions began supervising mixed martial arts.

In 2000, the Unified Rules of Mixed Martial Arts were codified by the New Jersey State Athletic Commission. The California State Athletic Commission had worked extensively on regulation, but their sanctioning of MMA was not implemented due to state governmental issues surrounding the process. [1] California officially sanctioned MMA on December 28, 2005, using the ruleset it helped devise five years previously. [2]

Since then, to create uniformity, all state commissions in the United States that regulate mixed martial arts have assimilated these rules into their existing unarmed combat competition rules and statutes. For a promotion to hold mixed martial arts events in a state-sanctioned venue, the promotion must abide by the state athletic commission's body of rules for weight limits.

The Unified Rules designate limits for fourteen different weight classes in mixed martial arts; all definitions and measurements are in pounds. [3] The strawweight class was added in 2015. [4] The super lightweight, super welterweight, super middleweight, and cruiserweight classes were added in July 2017. [5]

Outside the United States

With no state or government laws regarding weight class restrictions, organizations in other countries are free to schedule bouts with little regard for weight differential. However, due to the increasingly competitive and international nature of the sport, weight limits have been set by the promotions themselves usually in alignment with the Unified Rules, as maintaining standard weight classes is seen as fair and standard for all competitors.

One notable exception to this standard is Asian promotion ONE Championship, which adopted higher weight limits as well as pre-fight urinalysis in order to discourage weight cutting. This was brought about by the 2015 death of Chinese fighter Yang Jian Bing, who died during training camp for a fight after heavily dehydrating himself to make weight. In ONE, for instance, the light heavyweight limit is 102 kilograms (225 pounds), nine kilos/20 pounds more than the Unified Rules' light heavyweight standard.

Weight limits in women's MMA mostly follow the Unified Rules' limits, but organizations that recognize women's championships usually only have titles at the lower end of the table. UFC, for example, recognizes women's titles in the strawweight, flyweight, bantamweight and featherweight classes. Some organizations that recognize women's championships also sanction a separate atomweight title with a 105 pounds (48 kg) limit. 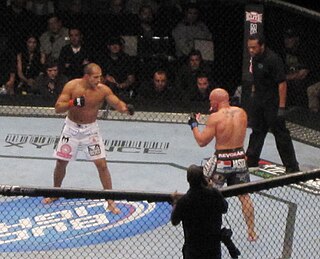 Pride Fighting Championships was a Japanese mixed martial arts promotion company. Its inaugural event was held at the Tokyo Dome on October 11, 1997. Pride held more than sixty mixed martial arts events, broadcast to about 40 countries worldwide. Pride held the largest live MMA event audience record of 91,107 people at the Pride and K-1 co-production, Shockwave/Dynamite, held in August 2002, as well as the audience record of over 67,450 people at the Pride Final Conflict 2003. For ten years PRIDE was one of the most popular MMA organizations in the world.

The super heavyweight division in mixed martial arts has no weight limit but generally refers to competitors weighing above 265 lb (120 kg). This is the definition used by the Nevada State Athletic Commission and the Association of Boxing Commissions. 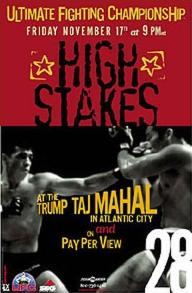 Most rule sets for mixed martial arts (MMA) competitions have evolved since the early days of Vale Tudo. As a result of health, legal, and moral concerns, many different rulesets were created, which give different countries and promotions very different tactics and strategies. Similarly, shoot wrestling organizations, such as Shooto, expanded their rulesets to integrate elements of Vale Tudo into their sport. However, for the most part, fighters accustomed to one rule set can easily acclimate to the others.

Invicta Fighting Championships, also known as Invicta FC, is an American professional mixed martial arts (MMA) promotion for female fighters based in the United States, and is owned by Anthem Sports & Entertainment Inc. It was founded in 2012 by Janet Martin, a former VP with MMA organization Blackeye Promotions, and Shannon Knapp, who held positions at various levels, including executive positions with World Fighting Alliance, International Fight League, Affliction Entertainment, UFC, and Strikeforce. It has a strategic partnership with fellow Japanese MMA promotion Jewels. 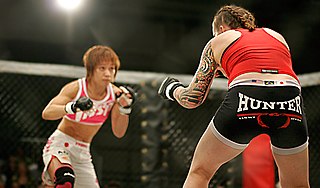 The International Mixed Martial Arts Federation (IMMAF) was founded on 29 February 2012 as the international governing body for amateur Mixed Martial Arts (MMA). Registered as a non-profit organisation under Swedish law, IMMAF serves as a democratic hub for national MMA federations and supports the growth of regulation and sport safety globally by aiding countries in the formation of federations where none exist. IMMAF launched with support of market leader, the Ultimate Fighting Championship (UFC). The UFC is among promotions sanctioned by federations under the IMMAF umbrella in countries that include Brazil and Sweden.