A model parliament (also referred to as a mock parliament) is a simulation of the parliamentary proceedings of a legislature or other deliberative assembly, often based upon the Westminster Parliamentary system. They can be similar to Model United Nations. Model parliaments can also be based on a specific national or subnational legislature. Model Parliaments are usually held as an educational tool to promote understanding of the working of government.

Model Parliaments have also been established to promote the activities of community service programmes or to advocate social or political change. The Canadian youth parliament movement was founded for the purpose of advancing youth programmes in Canada. In Australia the YMCA runs the YMCA Youth Parliament programs in every state and territory. Oxfam sponsors an "International Youth Parliament" to promote youth-led social change. As an example of the latter purpose, in 1914 the women's suffrage movement in Canada, under the leadership of Nellie McClung, organized a mock parliament to parody the refusal of the government of Manitoba to grant women the right to vote.

The executive, also referred as the executive branch or executive power, is the term commonly used to describe that part of government which enforces the law, and has overall responsibility for the governance of a state.

YMCA, sometimes regionally called the Y, is a worldwide youth organization based in Geneva, Switzerland, with more than 64 million beneficiaries in 120 countries. It was founded on 6 June 1844 by George Williams in London, originally as the Young Men's Christian Association, and aims to put Christian values into practice by developing a healthy "body, mind, and spirit". 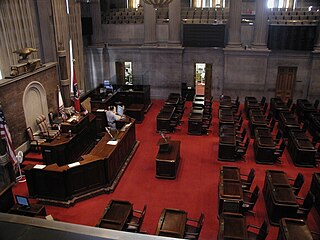 YMCA Youth and Government (YaG), also known as Youth In Government, or Model Legislature and Court, is a program of the YMCA of the USA that allows high school students to serve in model governments at the local, state, national, and international levels.

Youth work is community support activity aimed at older children and adolescents. Depending upon the culture and the community, different services and institutions may exist for this purpose. In the United Kingdom youth work is the process of creating an environment where young people can engage in informal educational activities. Different varieties of youth work include centre-based work, detached work, school-based work and religion based work. Throughout the United States and Canada, youth work is any activity that seeks to engage young people in coordinated programs, including those that are recreational, educational, or social by nature and design.

Youth Parliament of Manitoba Inc. (YPM) is a non-partisan, non-denominational, and incorporated registered charity based in Manitoba, Canada.

The Pan-African Parliament (PAP), also known as the African Parliament, is the legislative body of the African Union. It held its inaugural session in March 2004. The Parliament exercises oversight, and has advisory and consultative powers, having lasting for the first five years. Initially the seat of the Pan-African Parliament was in Addis Ababa, Ethiopia, but was later moved to Midrand, Johannesburg, South Africa. The goal in establishing the parliament was creating a space where people from all states of Africa could meet, deliberate, and pass some policy on issues that affect the entire continent of Africa.

The British Columbia Youth Parliament (BCYP) is a youth service organization that operates in the guise of a "parliament" in the Canadian province of British Columbia. The BCYP fulfills its motto of "Youth Serving Youth" by means of "legislation" enacting community service projects and other youth-oriented activities. The BCYP is the successor to the Older Boys' Parliament of British Columbia, which first met in 1924.

The Alberta Youth Parliament (AYP) is one of a number of provincial model youth parliaments that has its origins in the "boys work" movement of the nineteenth and early twentieth centuries. It is the oldest youth parliament in Alberta, and the longest continuously operating youth parliament in Canada. Its flagship session occurs every December in the Alberta Legislature, and it hosts a variety of smaller events throughout each year. It is open to all youths in Alberta who are between the ages of 15-21.

TUXIS was a boys’ program similar to the Scouting movement promoted by Canadian Protestant churches. There are a number of variations of what the acronym "TUXIS" is said to stand for. Most commonly, it is said to stand for "'you' ('U') and 'I' in 'T'raining and 'S'ervice with Christ ('X') in the centre." Another similar meaning was "Training Under Christ In Service". 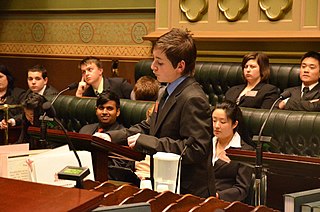 The YMCA Youth Parliament is a YMCA run youth model parliament program. There is a YMCA youth parliament in every Australian State and Territory.

The Newfoundland and Labrador Youth Parliament (NLYP) is one of a number of provincial youth model parliaments across Canada.

Anna Diamantopoulou is a Greek civil engineer and politician of the Panhellenic Socialist Movement (PASOK) who currently serves as president of the Athens-based think tank "DIKTIO" Network for Reform in Greece and Europe.

The Young Women's Christian Association (YWCA) is a nonprofit organization with a focus on empowerment, leadership, and rights of women, young women, and girls in more than 100 countries. 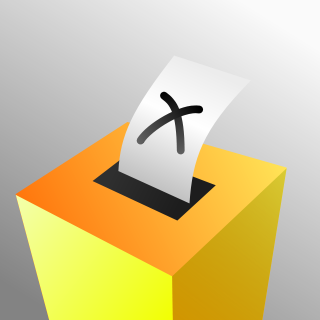 In 2007 the United Nations General Assembly resolved to observe 15 September as the International Day of Democracy—with the purpose of promoting and upholding the principles of democracy—and invited all member states and organizations to commemorate the day in an appropriate manner that contributes to raising public awareness.

…while democracies share common features, there is no single model of democracy and that democracy does not belong to any country or region... …democracy is a universal value based on the freely-expressed will of people to determine their own political, economic, social and cultural systems, and their full participation in all aspects of life. 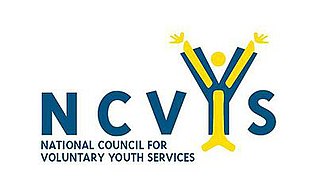 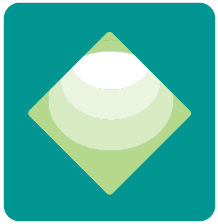 The World Federalist Movement — Canada (WFMC) is a member organization of the World Federalist Movement, a global citizens movement dedicated to promoting institutions of world governance. WFMC has a national headquarters in Ottawa, and active branches in Vancouver, Victoria, and Montreal. Since its founding in 1951, the WFMC and its predecessor organizations have been a strong advocate for the application of the principles of democratic federalism to world affairs. It advocates for the strengthening international bodies and democratizing existent global institutions.