Last updated April 25, 2019
For the production date of a product, see model year.

The term model year in computer modeling is used for calculated equations describing one calendar year of data. If a climate model, for example, is calculating the climate from 2015 to 2020, the computer has to calculate 5 model years, however it most likely takes much less time for the computer to do so. 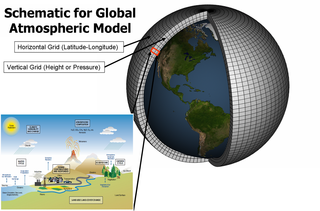 Climate models use quantitative methods to simulate the interactions of the important drivers of climate, including atmosphere, oceans, land surface and ice. They are used for a variety of purposes from study of the dynamics of the climate system to projections of future climate.

The term is used in descriptions for models like climateprediction.net, which has produced about 125 million model years of data until May 2011. [1]

Climateprediction.net (CPDN) is a distributed computing project to investigate and reduce uncertainties in climate modelling. It aims to do this by running hundreds of thousands of different models using the donated idle time of ordinary personal computers, thereby leading to a better understanding of how models are affected by small changes in the many parameters known to influence the global climate.

Climatology or climate science is the scientific study of climate, scientifically defined as weather conditions averaged over a period of time. This modern field of study is regarded as a branch of the atmospheric sciences and a subfield of physical geography, which is one of the Earth sciences. Climatology now includes aspects of oceanography and biogeochemistry. Basic knowledge of climate can be used within shorter term weather forecasting using analog techniques such as the El Niño–Southern Oscillation (ENSO), the Madden–Julian oscillation (MJO), the North Atlantic oscillation (NAO), the Northern Annular Mode (NAM) which is also known as the Arctic oscillation (AO), the Northern Pacific (NP) Index, the Pacific decadal oscillation (PDO), and the Interdecadal Pacific Oscillation (IPO). Climate models are used for a variety of purposes from study of the dynamics of the weather and climate system to projections of future climate. Weather is known as the condition of the atmosphere over a period of time, while climate has to do with the atmospheric condition over an extended to indefinite period of time. 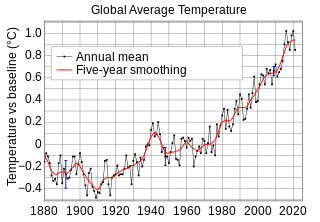 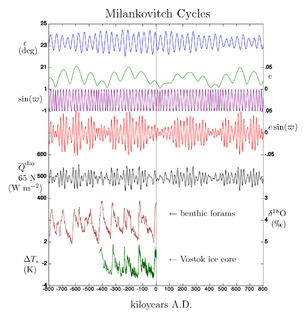 Milankovitch cycles describe the collective effects of changes in the Earth's movements on its climate over thousands of years. The term is named for Serbian geophysicist and astronomer Milutin Milanković. In the 1920s, he hypothesized that variations in eccentricity, axial tilt, and precession of the Earth's orbit resulted in cyclical variation in the solar radiation reaching the Earth, and that this orbital forcing strongly influenced climatic patterns on Earth. 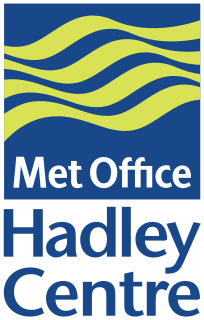 The Met Office Hadley Centre for Climate Change — named in honour of George Hadley — is one of the United Kingdom's leading centres for the study of scientific issues associated with climate change. It is part of, and based at the headquarters of the Met Office in Exeter.

HadCM3 is a coupled atmosphere-ocean general circulation model (AOGCM) developed at the Hadley Centre in the United Kingdom. It was one of the major models used in the IPCC Third Assessment Report in 2001. 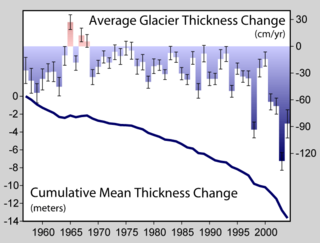 Crucial to the survival of a glacier is its mass balance or surface mass balance (SMB), the difference between accumulation and ablation. Climate change may cause variations in both temperature and snowfall, causing changes in the surface mass balance. Changes in mass balance control a glacier's long-term behavior and are the most sensitive climate indicators on a glacier. From 1980–2012 the mean cumulative mass loss of glaciers reporting mass balance to the World Glacier Monitoring Service is −16 m. This includes 23 consecutive years of negative mass balances.

Upper-atmospheric models are simulations of the Earth's atmosphere between 20 and 100 km that comprises the stratosphere, mesosphere, and the lower thermosphere. Whereas most climate models simulate a region of the Earth's atmosphere from the surface to the stratopause, there also exist numerical models which simulate the wind, temperature and composition of the Earth's tenuous upper atmosphere, from the mesosphere to the exosphere, including the ionosphere. This region is affected strongly by the 11 year Solar cycle through variations in solar UV/EUV/Xray radiation and solar wind leading to high latitude particle precipitation and aurora. It has been proposed that these phenomena may have an effect on the lower atmosphere, and should therefore be included in simulations of climate change. For this reason there has been a drive in recent years to create whole atmosphere models to investigate whether or not this is the case.

Backtesting is a term used in modeling to refer to testing a predictive model on historical data. Backtesting is a type of retrodiction, and a special type of cross-validation applied to previous time period(s). 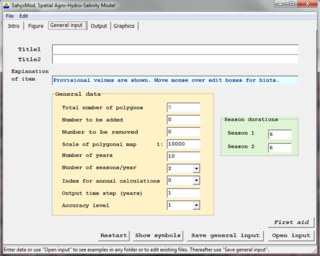 SahysMod is a computer program for the prediction of the salinity of soil moisture, groundwater and drainage water, the depth of the watertable, and the drain discharge in irrigated agricultural lands, using different hydrogeologic and aquifer conditions, varying water management options, including the use of ground water for irrigation, and several crop rotation schedules, whereby the spatial variations are accounted for through a network of polygons.

OSTM/Jason-2, or the Ocean Surface Topography Mission on the Jason-2 satellite, is an international Earth observation satellite mission that continues the sea surface height measurements begun in 1992 by the joint NASA/CNES TOPEX/Poseidon mission and followed by the NASA/CNES Jason-1 mission launched in 2001.

A greenhouse gas is a gas that absorbs and emits radiant energy within the thermal infrared range. Greenhouse gases cause the greenhouse effect. The primary greenhouse gases in Earth's atmosphere are water vapor, carbon dioxide, methane, nitrous oxide and ozone. Without greenhouse gases, the average temperature of Earth's surface would be about −18 °C (0 °F), rather than the present average of 15 °C (59 °F). The atmospheres of Venus, Mars and Titan also contain greenhouse gases.

Climate in the United Kingdom has been a subject of protest and controversies and various policies have been developed to mitigate its effects. It is estimated to demand at least 80-85% emission reductions in the EU during 2008-2050 with reductions as soon as technically possible. The UK Government has a commitment to reduce CO
2 equivalent emissions by 50% on 1990 levels by 2025 and by 80% on 1990 levels by 2050.

Computer-generated imagery (CGI) is the application of computer graphics to create or contribute to images in art, printed media, video games, films, television programs, shorts, commercials, videos, and simulators. The visual scenes may be dynamic or static and may be two-dimensional (2D), though the term "CGI" is most commonly used to refer to 3D computer graphics used for creating scenes or special effects in films and television. Additionally, the use of 2D CGI is often mistakenly referred to as "traditional animation", most often in the case when dedicated animation software such as Adobe Flash or Toon Boom is not used or the CGI is hand drawn using a tablet and mouse.