The National Technical Honor Society (NTHS) is an honor society for outstanding career and technical students of workforce vocational education institutions in the United States.

Today NTHS serves over 4,500 member schools, both secondary and post-secondary, and has a footprint in all 50 states, with chapters expanding into the Bahamas, American Samoa, Puerto Rico, and Guam. NTHS honors the achievements of leading career and technical education students, provides scholarships, and cultivates excellence in today's highly competitive, skilled workforce. Its fiscal year runs with the general school calendar, August 1 – July 31. The Jon H. Poteat Scholarship is the largest scholarship fund for NTHS. In April 2018, over $225,000 was awarded through the Jon H. Poteat Scholarship Fund, each equaling $1,000.

The goals of the National Technical Honor Society include:

Harrison Central High School is a 6A public high school located near Lyman, Mississippi, United States. As of the 2020–21 school year, it has a student body of 1,622 students and 144 faculty. The principal is Kelly Fuller.

J. Frank Dobie High School is a public secondary school located in Houston, Texas. Founded in 1968, it is named after the Texas writer of the same name. It houses grades 10-12. A Ninth Grade Center was opened recently to help with the influx of students. It is the largest school in the Pasadena Independent School District. The school mascots are the Longhorns and the official colors are orange and black, similar to that of the University of Texas at Austin.

Waunakee High School is a public high school located in Waunakee, Wisconsin. It is part of the Waunakee Community School District and part of the Badger Conference in athletics.

Northside High School is located in Columbus, Georgia, United States. It was founded in 2002. Originally, the mascot was planned to be the Wolverine, but after the September 11 attacks, the mascot was changed to the Patriot. Northside is known for its rivalry with Columbus High School. 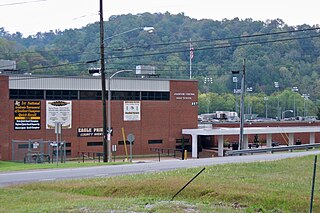 Liberty High School is a public secondary school located in Peoria, Arizona, United States. The high school is a part of the Peoria Unified School District. The school opened in August 2006 due to overcrowding at Sunrise Mountain High School and rapid population growth in Peoria. Currently, approximately 2,150 students are enrolled, making it the district's second-largest high school.

North Hall High School is a public four-year comprehensive high school located in the northern portion of Hall County, Georgia, United States, in the foothills of the Appalachian Mountains. North Hall serves Murrayville, Clermont, and portions of Gainesville. It is located 10 miles north of Gainesville and 15 miles south of Dahlonega.

McMinn County High School is a four-year public high school founded in 1903 in Athens, Tennessee. In the 2010-2011 school year, there were over 1,500 students enrolled.

Beech High School is one of two public high schools in Hendersonville, Tennessee. The school is located in the Shackle Island community on Long Hollow Pike, near the intersection of Shackle Island Road, Long Hollow Pike, and New Hope Road, just to the north of the Hendersonville city limits, and is part of the Sumner County Schools district. The current school officially opened on August 27, 1980, under the direction of Mr. Merroll N. Hyde. In 1986, the first female principal in Sumner County, Mary Clouse, became the principal. Frank Cardwell served as principal from 1999 until 2014, and was succeeded by Kenneth Powell.

One Family, One Destiny

Pottstown Senior High School is a high school in Pottstown, Pennsylvania, United States. It is part of the Pottstown School District. The school's mascot is a Trojan. The students go by the name of the "Trojans". The school colors are navy blue and white.

Harmony High School is located in Harmony, Florida, United States. It is one of nine schools in the Osceola County School District.

Georgetown High School is a public high school located in Georgetown, South Carolina, United States. It is one of four high schools in the Georgetown County School District.