Nicholas Cornwell (born 1972), better known by his pen name Nick Harkaway, is a British novelist and commentator. He is the author of the novels The Gone-Away World , Angelmaker, Tigerman, and Gnomon ; and a non-fiction study of the digital world, The Blind Giant: Being Human in a Digital World. Cornwell has admitted on Twitter [1] that he also writes under the pseudonym Aidan Truhen.

Harkaway was born Nicholas Cornwell in Cornwall, England. He is the son of Valérie Jane Eustace and author John le Carré. [2]

Harkaway was educated at the independent University College School in North London, [3] and Clare College, Cambridge, where he studied philosophy, sociology and politics and took up Shorinji Kan Jiu Jitsu. He worked in the film industry before becoming an author. [4]

The Gone-Away World (2009) is Harkaway's first novel. Originally titled The Wages of Gonzo Lubitsch, [5] it concerns a number of ex-special forces operatives turned truckers who are hired to perform a dangerous mission in a post-apocalyptic world. [2]

Tigerman (2014) concerns a superhero origin story on an impoverished and doomed tropical island.

Gnomon (2017) deals with a state that exerts ubiquitous surveillance on its population. A detective investigates a murder through unconventional methods that leads to questions about her society's very nature.

The Blind Giant (2012), Harkaway's first work of non-fiction, dealt with the effect of digital change on society and what it means to be human.

Harkaway has been an outspoken critic of the Google Book Search Settlement Agreement, posting on his blog, [6] speaking out on BBC Radio’s The World at One in May 2009, and appearing on a television debate with Krishnan Guru-Murthy and Tom Watson MP in September 2009.

David John Moore Cornwell, better known by his pen name John le Carré, was a British author, who took Irish citizenship towards the end of his life, best known for his espionage novels. During the 1950s and 1960s, he worked for both the Security Service (MI5) and the Secret Intelligence Service (MI6). His third novel, The Spy Who Came In from the Cold (1963), became an international best-seller and remains one of his best-known works.

Nicholas Laird is a Northern Irish novelist and poet.

Peter Anthony Dale Collier was an American writer and publisher. He was the founding publisher of conservative Encounter Books in California and held that position from 1998 until he resigned in 2005. The company moved from San Francisco to New York City, and Collier was replaced as publisher by Roger Kimball.

Nicholas F. "Nick" Benton is the founder, owner, and editor of the Falls Church News-Press, a weekly newspaper distributed in Falls Church, Virginia, and in parts of Fairfax County, Arlington County, and Washington D.C. 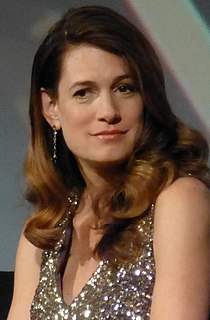 Gillian Schieber Flynn is an American writer. Flynn has published three novels, Sharp Objects, Dark Places, and Gone Girl, all three of which have been adapted for film or television. Flynn wrote the adaptations for the 2014 Gone Girl film and the HBO limited series Sharp Objects. She was formerly a television critic for Entertainment Weekly.

Daniel Weyman is an English actor.

The Gone-Away World is the debut novel of British author Nick Harkaway, a science fiction novel set in a post-apocalyptic world crippled by the 'Go-Away War'. First published in June 2008 by Heinemann.

Shane Richard Acker is an American animator, film director, screenwriter and animation teacher known for directing 9, which is based on his 2005 Academy Award-nominated short film, of the same title. He is a graduate of the University of California, Los Angeles.

Dylan Cole is an American Digital Matte-Painter and concept artist specializing in work for film, television, and video games. Cole received a degree in fine arts from UCLA. He is best known for his work on feature films like The Lord of the Rings trilogy, Avatar, Daredevil, Alice in Wonderland, Tron: Legacy, Maleficent and The Chronicles of Riddick. He recently published his first book, The Otherworldly Adventures of Tyler Washburn.

Belo Miguel Cipriani is an American writer, publisher, and entrepreneur in the Twin Cities of Minnesota. He is the founder of Oleb Media, a digital inclusion firm, and the disability publishing house Oleb Books. He is also an activist for LGBT, disabled and cultural minority communities. Cipriani has been a columnist for publications including the Bay Area Reporter, San Francisco Chronicle, Huffington Post among others. He is the author of Blind: A Memoir (2011), which details the first two years of his recovery after he was attacked and beaten in the Castro District of San Francisco, California in 2007. Additionally, Cipriani is the official spokesperson for Guide Dogs For the Blind and was named "Best Disability Advocate" by SF Weekly in 2015.

The Kitschies are British literary prizes presented annually for "the year’s most progressive, intelligent and entertaining works that contain elements of the speculative or fantastic." Works that were published in the United Kingdom in the year of the award are eligible.

Mr. Penumbra's 24-Hour Bookstore is a 2012 novel by American writer Robin Sloan. It was chosen as one of the best 100 books of 2012 by the San Francisco Chronicle, was a New York Times Editor's Choice, and was on the New York Times Hardcover Fiction Best Seller list as well as the NPR Hardcover Fiction Bestseller List. The US book cover, which glows in the dark, was done by Rodrigo Corral and chosen as one of the 25 best book covers for 2012 by BookPage.

Bernard Cornwell's career started in 1981 with Sharpe's Eagle. He has been a prolific historical novelist since then having published more than 50 novels. 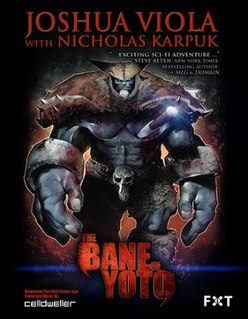 The Bane of Yoto is a thirteen-time award-winning science-fantasy novel by Josh Viola (creator) and Nicholas Karpuk, first published in June 2012 by music label FiXT Music owned by electronic rocker Klayton of Celldweller.

Gnomon is a 2017 science fiction novel by British author Nick Harkaway. The book deals with a state that exerts ubiquitous surveillance on its population. A detective investigates a murder through unconventional methods that leads to questions about her society's very nature.