Outside is an American company and magazine focused on the outdoors. The first issue of Outside was published in September 1977. [2]

Outside founders were Jann Wenner (the first editor in chief), William Randolph Hearst III (its first managing editor), and Jack Ford (an assistant to founding publisher Donald Welsh and a son of former U.S. President Gerald Ford). [3] Wenner sold Outside to Lawrence J. Burke two years later. Burke merged it into his magazine Mariah (founded in 1976) and after a period of using the name Mariah/Outside kept the Outside name for the merged magazine. [4] Christopher Keyes is the current editor. [5]

John Rasmus, the editor of Outside, launched the career of Jon Krakauer and other freelance travel and adventure writers. Though the magazine has tilted toward a more commercial aesthetic in recent years, it has also recruited figures from the literary world for freelance assignments. Writers whose work has appeared in Outside include Sebastian Junger, Bruce Barcott, Tim Cahill, Daniel Coyle, E. Annie Proulx, naturalist and author David Quammen, and Bob Shacochis. Songwriter David Berkeley also worked for Outside.

Nickelodeon is an American pay television channel which launched on April 1, 1979, as the first cable channel for children. It is run by Paramount Global through its networks division's Kids and Family Group. Its programming is primarily aimed at children aged 2–17, along with a broader family audience through its program blocks.

Stereophile is a monthly American audiophile magazine which reviews high-end audio equipment, such as loudspeakers and amplifiers, and audio-related news. 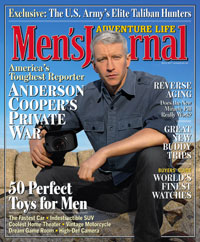 Outside TV is a sports-oriented cable and satellite television network based on Outside magazine. The network features programming related to various outdoor activities and the lives of those who engage in them. High-definition programs appear on the company's cable, satellite, telco and broadband providers’ sports and entertainment offerings.

IGN is an American video game and entertainment media website operated by IGN Entertainment Inc., a subsidiary of Ziff Davis, Inc. The company's headquarters is located in San Francisco's SoMa district and is headed by its former editor-in-chief, Peer Schneider. The IGN website was the brainchild of media entrepreneur Chris Anderson and launched on September 29, 1996. It focuses on games, films, television, comics, technology, and other media. Originally a network of desktop websites, IGN is now also distributed on mobile platforms, console programs on the Xbox and PlayStation, FireTV, Roku, and via YouTube, Twitch, Hulu, and Snapchat.

Backpacker is an American lifestyle magazine publication that features information on wilderness hiking and adventure. It has been published since 1973. Backpacker magazine is currently published by Outside and is based in Boulder, Colorado.

ESPN Inc. is an American multinational sports media conglomerate majority-owned by The Walt Disney Company, with Hearst Communications as an equity stakeholder. For management and financial reporting purposes, the company is the main entity within the ESPN and Sports Content segment of Disney. 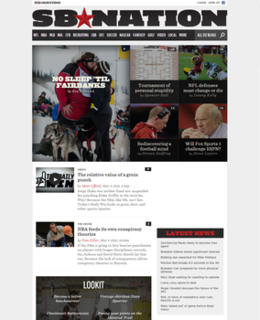 SB Nation is a sports blogging network owned by Vox Media. It was co-founded by Tyler Bleszinski, Markos Moulitsas, and Jerome Armstrong in 2005. The blog from which the network formed was started by Bleszinski as Athletics Nation in 2003, and focused solely on the Oakland Athletics. It has since expanded to cover sports franchises on a national scale, including all Major League Baseball, National Basketball Association, National Football League, and National Hockey League teams, as well as college and soccer teams, mixed martial arts and professional wrestling, totaling over 300 community sites. In 2011, the network expanded into technology content with The Verge, leading to the parent company Sports Blogs Inc. being rebranded as Vox Media. SB Nation operates from Vox Media's offices in New York City and Washington, D.C.

Vegas Stats & Information Network (VSiN) is an American sports betting radio network and streaming television channel. Founded in 2017 by the family of sportscaster Brent Musburger, VSIN broadcasts from their studios at the South Point Casino on the Las Vegas Strip, and the Circa Resort & Casino Sportsbook studios on Fremont Street in Las Vegas, Nevada.