paidContent was an online media hub that covered news, information and analysis of the business of digital media. It was founded in 2002 by journalist Rafat Ali to "chronicle the evolution of digital content that is shaping the future of the media, information and entertainment industries." [1]

In 2008, ContentNext was purchased by Guardian Media Group for a reported $30 million. [3] It became a member of the Guardian Professional Group, though founder/editor Ali and CEO Richardson, formerly of Yahoo! Finance, [4] continued to run the media website as an independent business. [5] 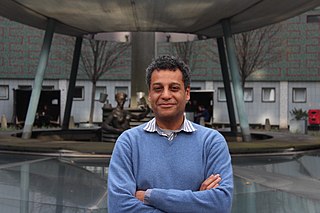 Tony Ageh OBE, is the New York Public Library's Chief Digital Officer having previously been Controller of Archive Development at the BBC.

Dennis Publishing Ltd. is an independent publisher founded in 1974. 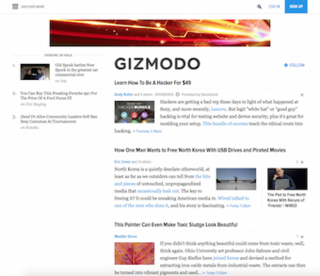 Gizmodo is a design, technology, science and science fiction website. It was originally launched as part of the Gawker Media network run by Nick Denton, and runs on the Kinja platform. Gizmodo also includes the subsite io9, which focuses on science fiction and futurism. Gizmodo is now part of G/O Media, owned by private equity firm Great Hill Partners.

Gigaom is a blog-related media company. The blog offers news, analysis, and opinions on startup companies, emerging technologies, and other technology related topics. It was started by Om Malik in San Francisco, California and was acquired by Knowingly Corp. in 2015. 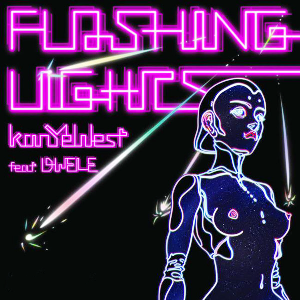 "Flashing Lights" is a song by American hip-hop artist Kanye West. It features Detroit R&B singer Dwele and contains background vocals from Australian singer Connie Mitchell. West co-wrote and co-produced the song with Eric Hudson and released it on November 12, 2007 as the fourth single for his third studio album, Graduation. The single's cover art was designed by Japanese pop artist Takashi Murakami. The single received critical acclaim from music critics and is cited as one of the best songs on Graduation.

Guardian US is the New York City-based American online presence of the British print newspaper The Guardian. It launched in September 2011, led by editor-in-chief Janine Gibson, and followed the earlier Guardian America service which was wound up in 2009. Guardian US is only available online, although Guardian Weekly, an international version of The Guardian is available in print and online. John Mulholland, appointed in January 2018, is the editor of Guardian US.

A paywall is a method of restricting access to content via a purchase or paid subscription. Beginning in the mid-2010s, newspapers started implementing paywalls on their websites as a way to increase revenue after years of decline in paid print readership and advertising revenue, partly due to the use of ad blockers. In academics, research papers are often subject to a paywall and are available via academic libraries that subscribe.

idiomag is an early product created by idio, a UK-based technology company founded in 2006 by two Warwick Business School graduates, Andrew Davies and Ed Barrow. The idio platform allows publishers and brands to personalise their content and distribute it across multiple platforms, which is intended to improve audience engagement and revenue.

Richard Rafael Van Veen is an American entrepreneur. He is currently Head of Global Creative Strategy at Facebook. Van Veen co-founded the popular comedy brand/website CollegeHumor. He was also CEO of Notional, a television production company born out of CollegeHumor.

Live Science is a science news website run by Future via Purch, which it purchased from Imaginova in 2009. Stories and editorial commentary are typically syndicated to major news outlets, such as Yahoo!, MSNBC, AOL, and Fox News.

Exact Editions is an integrated content management platform for magazine and book publishers. It was launched in 2005 by Adam Hodgkin, Daryl Rayner and Tim Bruce. 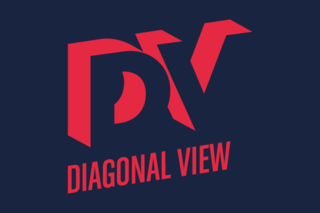 Diagonal View is a Multi Channel Network founded in March 2008 by Matt Heiman and Steve Carey, together with ITN. Unlike many other MCNs who are primary aggregators of content, Diagonal View own and produce the majority of their own videos. A platform agnostic company, their content can be viewed on YouTube, Facebook, Vessel, AOL amongst others. With separate teams working on different platforms, they are thought to be the largest digital content producer outside of the USA.

Vocativ is an American media and technology company founded in 2013 by Mati Kochavi. Vocativ uses proprietary data-mining technology to explore the deep web in order to discover stories and generate original content. In 2017, the company announced it would focus exclusively on video content and stop publishing written stories.

Skift, Inc. is a media company founded in 2012 that provides news, research, and marketing services for the travel industry. It was founded by Rafat Ali and Jason Clampet.