The company specialises exclusively in commissioning and producing new plays and helping playwrights develop their craft.

Over the past four decades, Paines Plough has established itself as a leading new writing company producing work by a wide range of playwrights across the UK and abroad. Collaboration with other theatre organisations is a vital feature of the company’s work as since 2010 the company has co-produced every show they've worked on with either a venue or a touring partner.

In 2005, Paines Plough launched Future Perfect in conjunction with Channel 4. The scheme is a year-long attachment for emerging playwrights. Writers who have taken part include Lizzie Nunnery, [2] Tom Morton-Smith and Duncan Macmillan. [3]

In October 2010, the company won a TMA award for special achievement in regional theatre. [4]

Paines Plough was formed in 1974 over a pint of Paines bitter in the Plough pub by playwright David Pownall [1] and director John Adams.

For over 40 years the company has commissioned, produced and toured new plays all over Britain and internationally.

Roundabout is Paines Plough's touring in-the-round auditorium. Roundabout was designed by Lucy Osborne [5] and Emma Chapman [6] in collaboration with Charcoalblue [7] and Howard Eaton. [8] It was built and developed by Factory Settings. [9]

In 2010, Roundabout was commissioned, with a prototype built in 2011 with Sheffield Theatres. The opening season of Roundabout consisted of three new plays performed in repertory One Day When We Were Young by Nick Payne, Lungs by Duncan Macmillan and The Sound of Heavy Rain by Penelope Skinner.

In 2014, Roundabout was re-imagined to allow for touring. As part of Paines Plough's 40th anniversary celebrations a new season was commissioned for Roundabout. The plays debuted at Edinburgh Festival Fringe at Summerhall: Our Teacher's A Troll by Dennis Kelly, The Initiate by Alexandra Wood and Lungs and Every Brilliant Thing by Duncan Macmillan. After the run in Edinburgh Roundabout toured nationally to: Corn Exchange, Margate Theatre Royal, Hackney Showroom and The Civic in Barnsley. [10]

Roundabout won the Theatre Building of the Year award at The Stage Awards. [11]

In 2015, Roundabout toured with the same programme but added one new play to the repertory The Human Ear by Alexandra Wood. The auditorium once again took up residency at Summerhall for Edinburgh Festival Fringe before touring nationally to: Corn Exchange, Margate Theatre Royal, Southbank Centre, The Lowry, Lincoln Performing Arts Centre, Brewery Arts Centre in Kendal and Appetite in Stoke.

At the end of 2015, Paines Plough were granted money as part of Arts Council England's Strategic Touring Fund to tour Roundabout from 2016 to 2018 with seven nationwide partner venues: The Civic in Barnsley, Margate Theatre Royal, RevoLuton, Hall For Cornwall, The Lowry, Lincoln Performing Arts Centre, Brewery Arts Centre in Kendal and Appetite in Stoke. They will each receive a repertory of three new plays commissioned and produced by Paines Plough and partners.

The Roundabout plays for 2016 are Love, Lies and Taxidermy by Alan Harris, Growth by Luke Norris and I Got Superpowers for My Birthday by Katie Douglas.

Between 1965 and 2010, the John Whiting Award was awarded annually to a British or Commonwealth playwright who, in the opinion of a consortium of UK theatres, showed a new and distinctive development in dramatic writing with particular relevance to contemporary society. The award was established in 1965 to commemorate John Whiting and his distinctive contribution to post-war British theatre. Until 2006, the selection was made by the drama panel of Arts Council England, and the play did not need to have been staged, which allowed plays produced on radio to be considered.

Seattle Repertory Theatre is a major regional theatre located in Seattle, Washington, at the Seattle Center. It is a member of Theatre Puget Sound and Theatre Communications Group. Founded in 1963, it is led by Artistic Director Braden Abraham and Managing Director Jeffrey Herrmann. It received the 1990 Regional Theatre Tony Award.

Libby Appel served as the fourth artistic director of the Oregon Shakespeare Festival (OSF) from 1995 to June 2007. Appel directed more than 25 productions at OSF, and her artistic vision influenced the 11 plays presented each year during her tenure. Despite the festival's name, she placed increased emphasis on new works. “We have made major connections with world playwrights, artists whose voices we’re particularly interested in.” Appel said. “We commission playwrights, we develop plays here; we have playwrights in residence. We’re a world force now, and I’m really proud of that.”

The Apathists were a collective of British playwrights who staged plays and happenings in London between March 2006 and March 2007. The events generated a cult following on the London theatre scene. The collective had a festival of their work at the Union Theatre produced by David Luff and were involved in the 2006 Latitude Festival, but their work mainly centred on monthly nights at Theatre503, formerly the Latchmere Theatre. 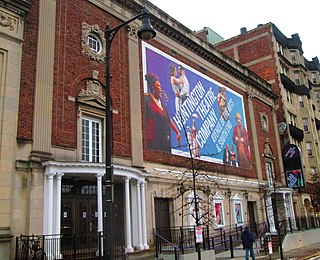 The Huntington Theatre Company is a professional theatre located in Boston, Massachusetts and the recipient of the 2013 Regional Theatre Tony Award, under the direction of Artistic Director Peter DuBois and Managing Director Michael Maso.

Nick Payne is a British playwright and screenwriter.

Norman L. Berman is an American theater composer and playwright.

Penelope Skinner is a British playwright who came to prominence after her play Fucked was first produced in 2008 at the Old Red Lion Theatre and the Edinburgh Festival to huge critical acclaim and has had successive plays staged in London including at the Bush Theatre, National Theatre and Royal Court Theatre, where she is a member of the Young Writers Programme.

Clare Lizzimore is an award winning British theatre director and writer. Her production of 'Bull' by Mike Bartlett, won 'Outstanding Achievement in an Affiliate Theatre' at the 2015 Olivier Awards. Lizzimore has been resident director at the Citizens Theatre, Glasgow, and staff director at the Royal National Theatre.

Kaite O'Reilly is UK-based playwright, author and dramaturge of Irish descent. She has won multiple awards for her work, including the Ted Hughes Award (2011) for her version of Aeschylus' tragedy The Persians. O'Reilly's plays have been performed at venues across the UK and at the Edinburgh Festival. Her work has also been shown internationally including in Europe Australia, Korea, Hong Kong and Taiwan. O'Reilly openly identifies as a disabled artist and has spoken of the importance of "identifying socially and politically as disabled" to her work.

Duncan Macmillan is an English playwright and director. He is most noted for his plays Lungs, People, Places and Things, Every Brilliant Thing and the stage adaptation of the George Orwell novel Nineteen Eighty-Four which he co-adapted and co-directed with Robert Icke.

Christina Anderson is an American playwright and educator. She is best known for her plays Good Goods and Inked Baby. Her work has received several honors and awards, including two Playwrights of New York (PoNY) nominations as well as the Lorraine Hansberry Award. Anderson is a Resident Playwright at the organization New Dramatists and the social justice theatre company Epic Theatre Ensemble. She has served as an Assistant Professor of Playwriting at Purchase College, and as the interim Head of Playwriting at Brown University.

Miami New Drama is a nonprofit theater company located in Miami, Florida. The theatrical organization produces diverse and multicultural works with artists across the United States.