The Paleobiology Database is an online resource for information on the distribution and classification of fossil animals, plants, and microorganisms.

The Paleobiology Database (PBDB) originated in the NCEAS-funded Phanerozoic Marine Paleofaunal Database initiative, which operated from August 1998 through August 2000. From 2000 to 2015, PBDB received funding from the National Science Foundation. PBDB also received support form the Australian Research Council. From 2000 to 2010 it was housed at the National Center for Ecological Analysis and Synthesis, [1] a cross-disciplinary research center within the University of California, Santa Barbara. It is currently housed at University of Wisconsin-Madison and overseen by an international committee of major data contributors.

The Paleobiology Database works closely with the Neotoma Paleoecology Database, which has a similar intellectual history, but has focused on the Quaternary (with an emphasis on the late Pleistocene and Holocene) at timescales of decades to millennia. Together, Neotoma and the Paleobiology Database have helped launch the EarthLife Consortium, a non-profit umbrella organization to support the easy and free sharing of paleoecological and paleobiological data. 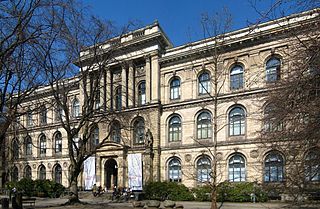 Birbal Sahni FRS was an Indian paleobotanist who studied the fossils of the Indian subcontinent. He also took an interest in geology and archaeology. He founded what is now the Birbal Sahni Institute of Palaeobotany at Lucknow in 1946. His major contributions were in the study of the fossil plants of India and in plant evolution. He was also involved in the establishment of Indian science education and served as the President of the National Academy of Sciences, India and as an Honorary President of the International Botanical Congress, Stockholm. 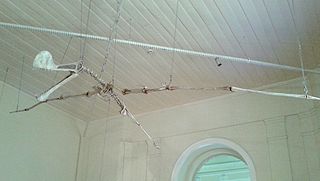 Tropeognathus is a genus of large pterosaurs from the late Early Cretaceous of South America. This genus is considered to be a member of the family Anhangueridae, however, several studies have also recovered it within another family called Ornithocheiridae. Both of these families are diverse groups of pterosaurs known for their keel-tipped snouts and large size. Tropeognathus is regarded as the largest pterosaur found in the Southern Hemisphere, only rivaled by the huge azhdarchids. The type and only species is Tropeognathus mesembrinus. Fossil remains of Tropeognathus have been recovered from the Romualdo Formation, which is a Lagerstätte located in the Santana Group of the Araripe Basin in northeastern Brazil.

Cycnorhamphus is a genus of gallodactylid ctenochasmatoid pterosaur from the Late Jurassic period of France and Germany, about 152 million years ago. It is probably synonymous with the genus Gallodactylus.

The Palaeontological Museum in Germany, is a German national natural history museum located in the city of Munich, Bavaria. It is associated with the Ludwig-Maximilians-Universität. It has a large collection of fossils of animals and plants such as Mesozoic reptiles, early elephants and saber-toothed cats. The paleontological and geological institute which houses the museum is formally called the Bavarian State Collection for Palaeontology and Geology, which itself is one of several institutions which make up the Bavarian Natural History Collections.

Excalibosaurus is a monotypic genus of marine prehistoric reptiles (ichthyosaurs) that lived during the Sinemurian stage of the Early Jurassic period in what is now England. It is characterized by the extreme elongation of the rostrum, with the lower jaw about three-fourths of the length of the upper jaw, giving the animal a swordfish-like look. The only known species is Excalibosaurus costini. 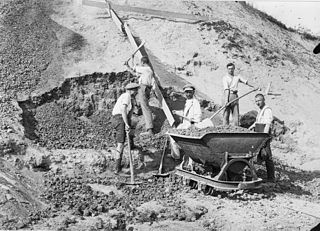 The Trossingen Formation, formerly the Knollenmergel, is a geological formation in Germany and Switzerland. It dates back to the late Norian-Rhaetian.

Denazinosuchus is a genus of goniopholidid mesoeucrocodylian. Its fossils have been recovered from the Upper Cretaceous Fruitland Formation and Kirtland Formation of the San Juan Basin, New Mexico. It is the most abundant and readily identifiable mesoeucrocodylian of the San Juan Basin, mostly due to its distinctive subrectangular, flattened, and sparsely pitted bony armor. It was first described in 1932 by Carl Wiman on the basis of a skull as a species of Goniopholis, G. kirtlandicus. Spencer G. Lucas and Robert M. Sullivan redescribed the species in 2003 and gave it its own genus, Denazinosuchus. To date, Denazinosuchus is only known from skull material, armor, and a thigh bone.

Dinosuchus is a problematic genus of extinct alligatorid crocodilian. It was very large compared to other alligatorids, save for the giant caiman Purussaurus and its closest relatives. The genus was first described in 1876 on the basis of a vertebra from the Brazilian Amazon, the type species being named D. terror. In 1921, a new species of Dinosuchus, D. neivensis, was named based on a large mandible that was discovered in Colombia. D. neivensis was later found to be synonymous with both Brachygnathosuchus braziliensis and Purussaurus brasiliensis, being reassigned in 1924 to the senior synonym P. brasiliensis. In 1965, D. terror was proposed to be a nomen vanum.

Crenilepis is an extinct genus of prehistoric bony fish that lived in the seas of present-day Europe during the Anisian stage of the Middle Triassic epoch.

Wimanius is a mixosaurid ichthyosaur, and the only genus in the family Wimaniidae. It existed during the Triassic Period in what is now Switzerland. It was described by Maisch and Matzke in 1998 based on fossils found in the Monte San Giorgio Formation, and the type species is Wimanius odontopalatus.

Chester Arthur Arnold was an American paleobotanist, born June 25, 1901 in Leeton, Missouri and died on 19 November 1977.

Eberhard Fraas was a German scientist, geologist and paleontologist. He worked as a curator at the Stuttgarter Naturaliensammlung and discovered the dinosaurs of the Tendaguru formation in then German East Africa. The dinosaur Efraasia is named after him. 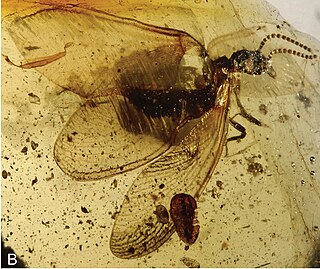 Shyamala "Shya" Chitaley was an Indian American Paleobotanist who had a nearly 60-year career of teaching and research in both the United States and India. She was the founder and first curator of the paleobotany department at the Cleveland Museum of Natural History, winner of the 2010 Botanical Society of America Award for Contributions to Paleobotany, and author of approximately 150 publications. 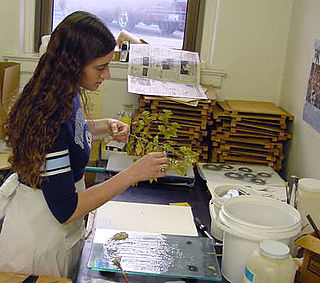 A scientific collection is a collection of items that are preserved, catalogued, and managed for the purpose of scientific study.

The Birbal Sahni Institute of Palaeosciences is an autonomous institute constituted under the Department of Science and Technology, Government of India. The institute is located at Lucknow, Uttar Pradesh, India and is a seat of higher learning in the field of plant fossil research. 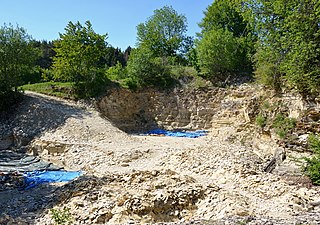 The Nusplingen Limestone is a geological formation in Baden-Württemberg, Germany. It preserves fossils dating to the Kimmeridgian age of the Late Jurassic. It mainly consists of lithographic limestones deposited in a marine basin, similar to the Solnhofen Limestone. Fossils of pterosaurs, thalattosuchians, and the oldest geophilomorph centipede Eogeophilus were found in the Nusplingen Limestone. 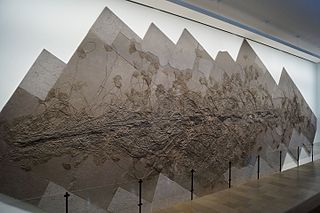 The Sachrang Formation or "Posidonienschiefer" Formation is a geological formation of southwestern Germany, northern Switzerland, northwestern Austria, southeast Luxembourg and the Netherlands, that spans about 3 million years during the Early Jurassic period. It is known for its detailed fossils, especially sea fauna, listed below. Composed mostly by black shale, the formation is a Lagerstätte, where fossils show exceptional preservation, with a thickness that varies from about 1 m to about 40 m on the Rhine level, being on the main quarry at Holzmaden between 5 and 14 m. Some of the preserved material has been transformed into fossil hydrocarbon Jet, specially wood remains, used for jewelry. The exceptional preservation seen on the Posidonia Shale has been studied since the late 1800s, finding that a cocktail of chemical and environmental factors let to such an impressive conservation of the marine fauna. The most common theory is the changes in the oxygen level, where the different anoxic events of the Toarcian left oxygen-depleted bottom waters, with the biota dying and falling to the bottom without any predator able to eat the dead bodies. 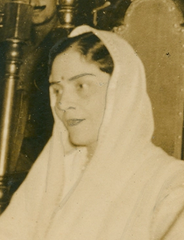 Savitri Sahni, born Savitri Suri, was president of the Birbal Sahni Institute of Paleosciences from 1949 to 1969.