"Pardon Miss Westcott" is a 1959 Australian TV play by the Seven Network as part of drama anthology series Shell Presents . It was a musical set in colonial Australia and was broadcast live. It was Australia's first television musical comedy. [1] [2] [3]

It ran for 75 minutes and featured eight new songs and a cast of nineteen. [4]

It is 1809 and Britain sends its convicts to the penal colony of New South Wales. On a convict ship travelling to Sydney, the convicts, notably three men, Mansfield, Harbutt, and Snark, sing "He-ho, you'll never go back".

Elizabeth Westcott is being transported after being given a five year sentence for killing a pig and serving it to a pompous magistrate at her father's inn. On the boat over she meets Richard Soames, an army officer being transferred to the NSW Corps. Elizabeth befriends Mansfield, Harbutt, and Snark after she refuses to report them for theft; they sing "Send for Me" together.

The ship arrives in Sydney. Richard meets the new, temporary Governor, Colonel Paterson, who has taken over from Governor Bligh (the Rum Rebellion has just taken place). Paterson complains about the lack of decent servants and Richard recommends Elizabeth but Paterson is reluctant to employ a former convict.

Elizabeth arrives to track down Richard and impresses Paterson, who offers her the job of managing Government House. She persuades Richard to let Mansfield, Harbutt, and Snark join her as servants. Richard sings "You Walk By" to Elizabeth.

Elizabeth runs the house with great success but this causes the Governor's wife, Lydia, to become jealous and demand the convict leave. Paterson decides to grant Elizabeth a ticket of leave and loans her five pounds to set up an inn. Elizabeth sings "I'm on My Way". [5]

Elizabeth runs the inn, called the Silver Bottle, along with a servant girl, Mog. It is popular but they have trouble with the local soldiers. She decides to gate crash a party held by Paterson and his wife, in order to talk to the Governor. At the party, Lydia sings a song to her guests, "Our Own Bare Hands".

Elizabeth arrives to make an appeal to Paterson, but upsets Lydia. Richard arrives at the party and dances with Elizabeth; he sings her a song, "Sometimes".

At the Silver Bottle, the customers, including Mansfield, Harbutt, and Snark, sing and dance a number, "The Grog Song". The convicts mock Lydia, when Paterson arrives and overhears. He is upset and sends the convicts home. Paterson also tells Elizabeth she and Richard must not see each other, as she would be bad for his career. She briefly reprises "Send for Me".

Paterson tells Richard to not see Elizabeth and he reluctantly agrees. Mansfield, Harbutt, and Snark escape, taking Paterson's rabbits. Sent to find the convicts, Paterson sneaks out to see Elizabeth and they sing a song, "So Much More". Paterson catches the two of them together and demands Richard's resignation; he also orders Paterson to spend the night in prison with the three recaptured convicts.

Lydia is convinced that Elizabeth and her husband are having an affair. The convicts have broken out of prison again. Elizabeth insists she loves Richard. Elizabeth and Richard sing a love duet, "You Walked By".

The convicts arrive, having recaptured Paterson's rabbits. Paterson tells Richard that the NSW Corps is being disbanded, Paterson is going home and Richard is out of the army. Elizabeth has to serve out the remaining four years of her sentence. Mansfield, Harbutt, and Snark are given an extra five years of service, but are assigned to Richard as servants. Mog, the convicts, Elizabeth and Richard sing a final song.

The film was commissioned by ATN-7 from the writers of the musical Lola Montez , which had enjoyed a successful run on stage. The brief was to create a family musical for Christmas. The budget was £5,000 [6]

The book was by Alan Burke and Peter Benjamin, the music by Peter Stannard, and the lyrics were by Peter Benjamin. Burke appeared "by courtesy of the ABC" who were employing him as a director. [1] [7] [8]

The show was broadcast live from ATN-7 studios in Epping, Sydney. The music was conducted by Tommy Tycho. Kevin Cameron did the sets, Bill Robinson did wardrobe and Vernon Best was operations manager. Ken Shadie did audio. Betty Pounder was borrowed from JC Williamsons to do choreography.

Michael Cole had been fired from Lola Montez. He was hired by the writers for this to make it up to him. [9]

According to Ailsa McPherson, who worked on the show as a script assistant, during the live broadcast the actor who played Colonel Paterson accidentally omitted over a page of dialogue in an earlier scene. The other actors continued because it was live, but it meant later plot points would be confusing. After the show went to air, they re-shot the scene and re-inserted it into the tape and kine. [10]

The Beacon Research Company estimated that 250,000 adults and 10,000 children watched the broadcast. More than 100 people rang in to congratulate on the broadcast on the night it aired. [11]

The critic from the Sydney Morning Herald wrote the musical "had an entertaining and beguilingly tuneful premiere in a smoothly organised live production" despite "the lack of colour and space in which create spectacle and the effects which properly, and uniquely-belong to the stage." However:

Nine numbers in a 75-minute show is pretty fair value, and the... tunes and lyrics were fluent, neatly turned and literate. Equally important. they arose naturally from the situations arranged by the... book, and always took the story-line, and characterisation, a step further. And at least one song, "Bells Suddenly Ring" is a possible hit tune. Moreover, the show proved that for those who are willing to use their imagination, there is plenty of theatrical material in our early history... Michael Cole acted and sang very attractively indeed: Wendy Blacklock brought the proper strength of character... but was not entirely at ease with her songs. Nigel Lovell.. was engaging and sympathetic, and Queenie Ashton, his snooty hypochondriac wife, was nicely acid. Chris Christiansen, Nat Levispn and Michael Walshe made a usefully funny convict trio, and Joy Hill danced with considerable verve and enthusiasm. [12]

Reviewing it years later Filmink called it "charming... full of life and energy, with enjoyable tunes and dance numbers; the cast completely commits, particularly the supporting players, the production values are impressive, and the script even makes vague political points (about how laws should be just, and you shouldn't keep stealing things). It's very well directed... Admittedly, the script feels as though it could have done with another draft just to tighten the subplots, but there is some lovely comedy, bright tunes, as well as thrilling high-octane dance numbers (with spectacular high kicks courtesy of ballerina Joy Hill). [13]

A studio cast album, with different performers from the television version (apart from Queenie Ashton), was released in December 1960. [14]

The show was repeated on Channel 7 in November 1960.

The Bulletin called it "bright and tuneful". [15]

The Sydney Morning Herald said "it came through even better on the second run than the first." [16]

Wendy Blacklock AM is an Australia-born retired theatre, radio and television actress, comedienne, producer, writer, singer and choreographer and theatre entrepreneur, who has appeared in numerous radio and stage roles, both locally and in the United Kingdom, and has been referred to as "The Grand Dame of the Stage". 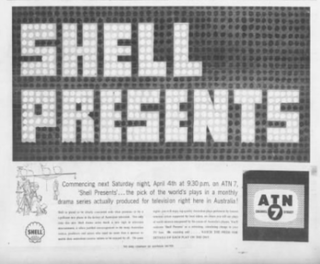 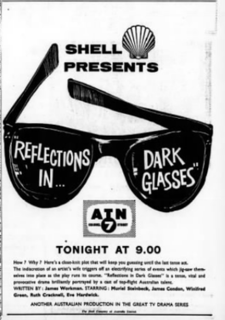 Lola Montez is a 1958 Australian musical. It was written by Alan Burke, Peter Stannard, and Peter Benjamin and focuses on four days of Lola Montez visiting the Ballarat Goldfields. 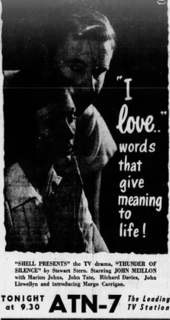 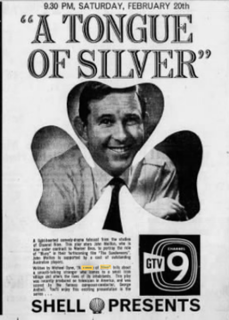 David Cahill was an Australian actor, writer producer and director, notable for his work directing in TV in the 1950s through to 1970s. It has been argued he was one of the best directors working in Australian TV.

"Rope" is a 1959 Australian TV play based on the play by Patrick Hamilton. It was part of Shell Presents.

"The Concert" is a 1961 Australian TV GTV-9's Melbourne studios. It was directed by Rod Kinnear. Australian TV drama was relatively rare at the time.

"Ruth" is a 1959 Australian television play. It was presented as part of the Shell Presents program and starred Lyndall Barbour. It was written by John Glennon, an American actor and writer who appeared in the production, and directed by Rod Kinnear. The play aired in Melbourne on 5 September 1959 and in Synday on 19 September 1959. 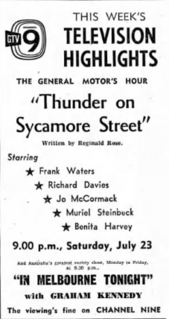 Brett Porter is an Australian producer, writer and director best known for his work in TV. He worked at ATN-7 producing some of the first drama made for Australian television. He moved to the ABC in 1964, where he made documentaries and worked on Four Corners. He was then producer on Bellbird. He died in 1970 aged 57.

Lola Montez was a 1962 Australian TV play which was based on the musical of the same name.

Alice in Wonderland is a 1962 Australian television film based on Alice's Adventures in Wonderland. It was a pantomime and aired as part of the BP Super Show.

Michael Cole was an Australian singer and actor. He appeared in a number of Australian musicals.