Parsifal is a 1904 American silent film produced by the Edison Manufacturing Company and directed by Edwin S. Porter. It is based on the 1882 opera Parsifal by Richard Wagner, and stars Adelaide Fitz-Allen as Kundry and Robert Whittier as Parsifal. [1]

In 1903, Wagner's widow unsuccessfully attempted to stop a performance of Parsifal by the Metropolitan Opera in New York, causing great scandal. In 1904, Harley Merry acquired the motion picture rights and brought on Porter and Edison. Edison had been experimenting with ways to combine silent films with recorded music. Porter's version of Parsifal employed Edison's Kinetophone, "a primitive, synchronized sound-mix device, but this machine does not represent the era of silent film, since it had a short life with no great success." [2]

Despite a strong advertising campaign, sales were modest. [3]

The Great Train Robbery is a 1903 American silent Western film made by Edwin S. Porter for the Edison Manufacturing Company. It follows a gang of outlaws who hold up and rob a steam locomotive at a station in the American West, flee across mountainous terrain, and are finally defeated by a posse of locals. The short film draws on many sources, including a robust existing tradition of Western films, recent European innovations in film technique, the play of the same name by Scott Marble, the popularity of train-themed films, and possibly real-life incidents involving outlaws such as Butch Cassidy. 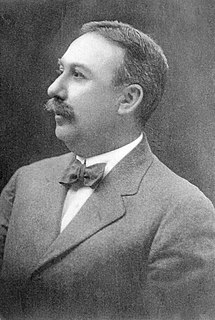 Edwin Stanton Porter was an American film pioneer, most famous as a producer, director, studio manager and cinematographer with the Edison Manufacturing Company and the Famous Players Film Company. Of over 250 films created by Porter, his most important include: What Happened on Twenty-third Street, New York City, (1901), ; Jack and the Beanstalk (1902); Life of an American Fireman (1903); The Great Train Robbery (1903); The European Rest Cure (1904); The Kleptomaniac (1905); Life of a Cowboy (1906); Rescued from an Eagle's Nest (1908); and The Prisoner of Zenda (1913).

Edison Studios was an American film production organization, owned by companies controlled by inventor and entrepreneur, Thomas Edison. The studio made close to 1,200 films, as part of the Edison Manufacturing Company (1894–1911) and then Thomas A. Edison, Inc. (1911–1918), until the studio's closing in 1918. Of that number, 54 were feature length, and the remainder were shorts. All of the company's films have fallen into the public domain because they were released before 1925. 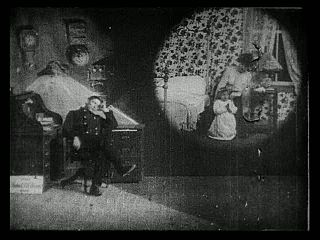 Life of an American Fireman is a short, silent film Edwin S. Porter made for the Edison Manufacturing Company. It was shot late in 1902 and distributed early in 1903. One of the earliest American narrative films, it depicts the rescue of a woman and child from a burning building. It bears notable similarities to the 1901 British short film Fire!, directed by James Williamson.

Another Job for the Undertaker is a 1901 silent comic trick film made at Edison's recently opened studio at 41 East 21st Street in Manhattan. It was photographed by Edwin S. Porter and co-directed by Porter and George S. Fleming. The two-shot film was copyrighted on May 15, 1901 and is approximately two minutes in length. It lacks a head title, which would have been supplied by projecting a separate lantern slide before screening the film. 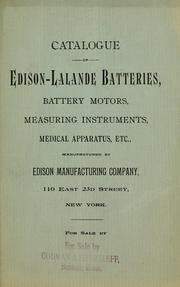 The Edison Manufacturing Company was a company organized in 1889 by the inventor and entrepreneur Thomas Edison that manufactured batteries, machinery and equipment, and also produced kinetoscope films. Its assets and operations were transferred to Thomas A. Edison, Inc. in 1911.

Justus D. Barnes, named George Barnes in some sources, was an American stage and film actor. He is best known for his role in the 1903 silent short The Great Train Robbery, which the American Film Institute and many film historians and critics recognize as the production that first established the Western genre, setting a new "narrative standard" in the motion picture industry. Kim Newman says it is "probably the first Western film with a storyline".

Wallace McCutcheon Sr. was a pioneer cinematographer and director in the early American motion picture industry, working with the American Mutoscope & Biograph, Edison and American Star Film companies. McCutcheon's wealth of credits are often mixed up with the small handful of films directed by his son, Wallace McCutcheon Jr. (1884–1928).

Execution of Czolgosz with Panorama of Auburn Prison is a 1901 silent film produced by the Edison Studios arms of Edison Manufacturing Company. The film is a dramatic reenactment of the execution of Leon Czolgosz by electric chair at Auburn Correctional Facility following his 1901 conviction for the assassination of William McKinley. It is considered an important film in the history of cinema.

By the Light of the Moon is a 1911 American single-reel silent film directed and filmed by Edwin S. Porter. It was produced for the Rex Motion Picture Company. It is one of the earliest examples of silhouette animation. 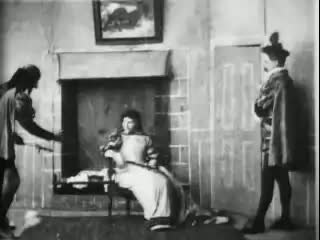 Faust and Marguerite is a 1900 American silent film produced and distributed by Edison Manufacturing Company. It was directed by Edwin S. Porter and based on the Michel Carré play Faust et Marguerite and the 1859 opera Faust adapted from the play by Charles Gounod.

The Miller's Daughter is a 1905 American silent film produced by Edison Manufacturing Company. Edison employees Wallace McCutcheon and Edwin S. Porter are generally credited as directors. The film is based on the melodrama Hazel Kirke by Steele MacKaye.

Dream of a Rarebit Fiend is a 1906 silent film directed by Edwin S. Porter for Edison Manufacturing Company. It is a seven-minute live-action film adaptation of the comic strip Dream of the Rarebit Fiend by American cartoonist Winsor McCay. The film was marketed as using several special effects in which "some of the photographic 'stunts' have never been seen or attempted before."

The Bold Bank Robbery is a 1904 short crime film produced and distributed by the Lubin Manufacturing Company. The silent film depicts a group of burglars who plan and execute a successful bank heist. Company employee Jack Frawley was the film's director, also coming up with the story and serving as cinematographer; the cast's identities are unknown. The silent film was the first Lubin Manufacturing Company release to feature an original narrative. 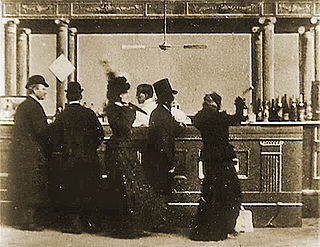 Kansas Saloon Smashers is a 1901 comedy short film produced and distributed by Edison Studios. Directed by Edwin S. Porter, it is a satire of American activist Carrie Nation. The film portrays Nation and her followers entering and destroying a saloon. After the bartender retaliates by spraying Nation with water, policemen order them out; the identities of the actors are not known. Inspiration for the film was provided by an editorial cartoon which appeared in the New York Evening Journal.

The 'Teddy' Bears is an American silent film directed by Edwin S. Porter and Wallace McCutcheon, and produced by the Edison Manufacturing Company starting as the fairy tale Goldilocks and ending as a political satire of United States President Theodore Roosevelt.