A privy mark was originally a small mark or differentiation in the design of a coin for the purpose of identifying the mint, moneyer, some other aspect of the coin's origin, or to prevent counterfeiting. One of the first instances of a privy mark used as a counterfeit measure was during the 17th century in a plan proposed by Sir Edward Ford (soldier) to mint farthings, halfpence and three-farthings. [1]

In modern times, the privy mark is used as a design and marketing feature to commemorate a special event or signify that the coin is part of a set. It is still sometimes used to signify the location or origin of where the coin was minted, but is then usually referred to as a mint mark. [2] [ unreliable source? ] Some privy marked coins – such as the Canadian Silver Privy Marked Maple Leaf – may sell at a premium.

The standard circulating coinage of the United Kingdom, British Crown Dependencies and British Overseas Territories is denominated in pounds sterling, and, since the introduction of the two-pound coin in 1994, ranges in value from one penny to two pounds. Since decimalisation, on 15 February 1971, the pound has been divided into 100 (new) pence. Before decimalisation, twelve pence made a shilling, and twenty shillings made a pound. British coins are minted by the Royal Mint in Llantrisant, Wales. The Royal Mint also commissions the coins' designs.

The British one pound (£1) coin is a denomination of the pound sterling. Its obverse bears the Latin engraving ELIZABETH II D G REG F D meaning, “Elizabeth II, by the grace of God, Queen, Defender of the Faith”. It has featured the profile of Queen Elizabeth II since the original coin's introduction on 21 April 1983. Four different portraits of the Queen have been used, with the latest design by Jody Clark being introduced in 2015. The design on the reverse side of the current, 12-sided coin features four emblems to represent each of the nations of the United Kingdom — the English rose, the leek for Wales, the Scottish thistle, and the shamrock for Northern Ireland, also two or three oak leaves — emerging from a single 5-branched stem within a crown. 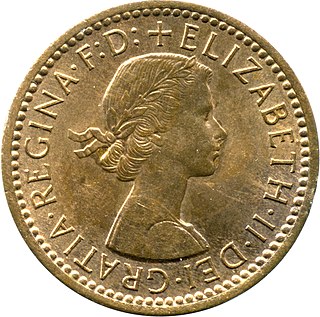 The British farthing coin, from Old English fēorðing, from fēorða, a fourth, was a unit of currency of one quarter of a penny, or 1/960 of a pound sterling. It was minted in bronze, and replaced the earlier copper farthings. It was used during the reigns of six monarchs: Victoria, Edward VII, George V, Edward VIII, George VI and Elizabeth II, but ceased to be legal tender on 1 January 1961. However, in the Falkland Islands, the Falkland Islands Dependencies, and the British Antarctic Territory, the farthing remained legal tender until 31 October 1971, according to an official proclamation published in the London Gazette 9 October 1970. It featured two different designs on its reverse during its 100 years in circulation: from 1860 until 1936, the image of Britannia; and from 1937 onwards, the image of a wren. Like all British coinage, it bore the portrait of the monarch on the obverse.

Trade dollars are silver coins minted as trade coins by various countries to facilitate trade with China and the Orient. They all approximated in weight and fineness to the Spanish dollar, which had set the standard for a de facto common currency for trade in the Far East.

The West Point Mint Facility is a U.S. Mint production and depository facility erected in 1937 near the U.S. Military Academy in West Point, New York, United States. Originally it was called the West Point Bullion Depository. At one point it had the highest concentration of silver of any U.S. mint facility, and for 12 years produced circulating pennies. It has since minted mostly commemorative coins and stored gold.

A mint mark is a letter, symbol or an inscription on a coin indicating the mint where the coin was produced.

The Jefferson nickel has been the five-cent coin struck by the United States Mint since 1938, when it replaced the Buffalo nickel. From 1938 until 2004, the copper-nickel coin's obverse featured a profile depiction of founding father and third U.S. President Thomas Jefferson by artist Felix Schlag; the obverse design used in 2005 was also in profile, though by Joe Fitzgerald. Since 2006 Jefferson's portrayal, newly designed by Jamie Franki, faces forward. The coin's reverse is still the Schlag original, although in 2004 and 2005 the piece bore commemorative designs.

The 500 yen coin is the largest denomination of Japanese yen issued in coinage. These coins were first struck in 1982 as the vending machine industry needed a higher valued coin for use in their machines. The denomination had previously been issued as paper currency which co-circulated with the new coins until 1994. Originally the 500 yen coin was made up of cupronickel, but was later changed to nickel brass, and then to bi-metallic to deter counterfeiting. This illegal practice has been a constant issue since the coin was first released as 500 yen coins used to be the highest valued in the world, but has been overtaken by the 5 Swiss francs coins. New bi-metallic coins are scheduled to be issued sometime in 2021 to further address the issue. With a history spanning 3 imperial eras, 500 yen coins are also collected by hobbyists and as mementos.

Soho Mint was created by Matthew Boulton in 1788 in his Soho Manufactory in Handsworth, West Midlands, England. A mint was erected at the manufactory containing eight machines, to his own patent design, driven by steam engine, each capable of striking 70 to 85 coins per minute.

The America the Beautiful quarters are a series of 56 25-cent pieces (quarters) issued by the United States Mint starting in 2010 and scheduled to continue until 2021. The obverse (front) of all the coins depicts George Washington in a modified version of the portrait used for the original 1932 Washington quarter. There will be five new reverse (back) designs each year, each commemorating a national park or national site – one from each state, the federal district, and each territory. The program is authorized by the America’s Beautiful National Parks Quarter Dollar Coin Act of 2008.

American Innovation dollars are dollar coins of a series minted by the United States Mint beginning in 2018 and scheduled to run through 2032. It is planned for each member of the series to showcase an innovation, innovator or group of innovators from a particular State or territory.