The Prosecution of Offences Act 1985 (c. 23) was an Act of Parliament in the United Kingdom. Its main effects were to establish the Crown Prosecution Service (CPS), to transfer the responsibility of prosecution of offences from the police to the CPS, [1] and to codify the prosecution process.

In criminal law, kidnapping is the unlawful transportation, asportation and confinement of a person against their will. Thus, it is a composite crime. It can also be defined as false imprisonment by means of abduction, both of which are separate crimes that when committed simultaneously upon the same person merge as the single crime of kidnapping. The asportation/abduction element is typically but not necessarily conducted by means of force or fear. That is, the perpetrator may use a weapon to force the victim into a vehicle, but it is still kidnapping if the victim is enticed to enter the vehicle willingly, e.g., in the belief it is a taxicab.

The Crown Prosecution Service (CPS) is the principal public agency for conducting criminal prosecutions in England and Wales. It is headed by the Director of Public Prosecutions (DPP).

The Sexual Offences Act 2003 is an Act of the Parliament of the United Kingdom.

Breach of the peace, or disturbing the peace, is a legal term used in constitutional law in English-speaking countries, and in a wider public order sense in the several jurisdictions of the United Kingdom. It is a form of disorderly conduct. 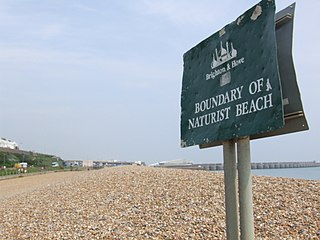 British Naturism is a members organisation with both individual and organisation members. It promotes naturism in the United Kingdom, and it is recognised by the International Naturist Federation as the official national naturist organisation in that country.

A police caution is a formal alternative to prosecution in minor cases, administered by the police in England and Wales. It is commonly used to resolve cases where full prosecution is not seen as the most appropriate solution. Accepting a caution requires an admission of guilt.

Harassment, alarm or distress is an element of a statutory offence in England and Wales, arising from an expression used in sections 4A and 5 of the Public Order Act 1986, which created the offence. The Act was amended in 1994.

A kerb crawler is a person who drives around areas known for street prostitution soliciting prostitutes for sexual activity. The act is known as "kerb crawling" because the person will typically drive very slowly along the kerbside.

The Criminal Law Act 1967 (c.58) is an Act of the Parliament of the United Kingdom that made some major changes to English criminal law. Most of it is still in force.

Covert policing in the United Kingdom are the practices of the British police that are hidden to the public, usually employed in order that an officer can gather intelligence and approach an offender without prompting escape.

The Vagrancy Act 1824 is an Act of Parliament of the United Kingdom that makes it an offence to sleep rough or beg. It remains in force in England and Wales, and anyone found to be sleeping in a public place or to be trying to beg for money can be arrested.

The Sexual Offences Act 1985 (c.44) was an Act of the Parliament of the United Kingdom that created two offences concerning prostitution, and increased the maximum sentence for attempted rape from seven years to life imprisonment. The act was applicable in England and Wales only.

A disability hate crime is a form of hate crime involving the use of violence against an individual with a disability due to the prejudice against that disability. It is often viewed politically as an extreme of ableism, or disablism, and is carried through into criminal acts against the person. This phenomenon can take many forms, from verbal abuse and intimidatory behaviour to vandalism, assault, or even murder. Disability hate crimes may take the form of one-off incidents, or may represent systematic abuse which continues over periods of weeks, months or even years.

R v Walker was an English Crown Court case that was a test of the Obscene Publications Act 1959. It was the first such prosecution involving written material in nearly two decades and set a precedent for using the act to prosecute web fiction. In October 2008, the defendant, English Civil Servant Darryn Walker was charged with publishing an obscene story on the Internet contrary to Section 2(1) of the Act. Media controversy was generated because the story in question was a real person fiction text horror story describing the imagined murder of the members of British pop group Girls Aloud. The case was abruptly abandoned on its first day and the defendant was cleared of all charges.