Re:Sound is the non-profit performance rights organization in Canada that collects and administers Neighbouring Rights royalties on behalf of recording artists, including featured artists and session musicians and record labels in Canada. [1] Re:Sound was founded in 1997 and in French is referred to as Ré:Sonne.

Re:Sound licenses recorded music to businesses across many industries, including radio stations, satellite radio, digital music services, nightclubs, bars, restaurants, retail establishments and others. The royalties that are collected from licence fees are distributed to the recording artists and record labels that create the music that is used by these businesses.

Following Canada's Copyright Act, Re:Sound files tariffs before the Copyright Board of Canada on behalf or recording artists and record labels, contacts and grants licences to all Canadian commercial radio broadcasters, businesses using recorded music and background music suppliers. Re:Sound also works with similar organisations around the world to collect royalties for Canadian music creators when their intellectual property is used in other jurisdictions.

Once a tariff is certified by the Copyright Board and the tariff rates and regulations have been established by the Board. Re:Sound can begin to make contact with businesses across Canada to notify them of their possible obligations under a new tariff.

Re:Sound licences are "blanket" licences, which mean that businesses can use as much music as they wish. This eliminates the need for a business to clear large numbers of recordings with individual rights holders.

Re:Sound keeps track of millions of pieces of data from Canadian commercial radio stations, satellite radio, pay audio, CBC and others. After processing and summarizing, the data is used in the distribution of royalties to the artists. Royalties collected are distributed equally between artists and record companies less only actual costs (under 15%). 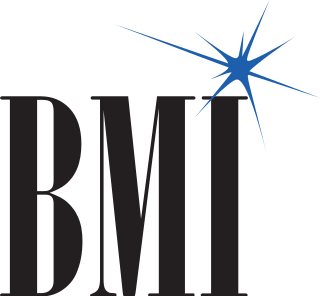 Broadcast Music, Inc. (BMI) is one of four United States performing rights organizations, along with the ASCAP, SESAC, Pro Music Rights, and Global Music Rights. It collects license fees on behalf of songwriters, composers, and music publishers and distributes them as royalties to those members whose works have been performed. In FY 2018, BMI collected $1.199 billion in licensing fees and distributed $1.12 billion in royalties. BMI's repertoire includes over 900,000 songwriters and 14 million compositions.

A private copying levy is a government-mandated scheme in which a special tax or levy is charged on purchases of recordable media. Such taxes are in place in various countries and the income is typically allocated to the developers of "content".

Copyrights can either be licensed or assigned by the owner of the copyright. A copyright collective is a body created by copyright law or private agreement which licenses copyrighted works on behalf of the authors and engages in collective rights management. Copyright societies track all the events and venues where copyrighted works are used and ensure that the copyright holders listed with the society are remunerated for such usage. The copyright society publishes its own tariff scheme on its websites and collects a nominal administrative fee on every transaction.

The Copyright Board of Canada is an economic regulatory body empowered to establish, either mandatorily or at the request of an interested party, the royalties to be paid for the use of copyrighted works, when the administration of such copyright is entrusted to a collective-administration society. The Board also has the right to supervise agreements between users and licensing bodies and issues licences when the copyright owner cannot be located.

PPL UK, Phonographic Performance Limited, is a UK-based music licensing company and performance rights organisation founded by Decca and EMI in 1934. As of 2019 PPL collected royalties for over 100,000 performers and recording rightsholders.

The Canadian Musical Reproduction Rights Agency Ltd. (CMRRA) is a music licensing agency based in Toronto, Ontario, Canada. Founded in 1975, CMRRA is a music licensing collective representing music rightsholders who range in size from large multinational music publishers to individual songwriters. On their behalf, CMRRA issues licences to individuals or organizations for the reproduction of songs on various media.

An Internet radio license is a specific type of broadcast license that allows the licensee to operate an Internet radio station. The licensing authority and number of licenses required varies from country to country, with some countries requiring multiple to cover various areas of a station's operation, and other countries not having stringent licensing procedures in place. Licensing costs also vary, based on the number of listeners that a station has, as well as other factors such as the number of songs played, the number of broadcast hours, and whether tracks are dubbed to a digital playout system.

Collective rights management is the licensing of copyright and related rights by organisations acting on behalf of rights owners. Collective management organisations, such as collecting societies, typically represent groups of copyright and related rights owners, such as authors, composers, publishers, writers, photographers, musicians and performers. At the least, copyright owners authorize collective rights management organizations to monitor the use of their works, negotiate licenses with prospective users, collect remuneration for use of copyrighted works, ensuring a fair distribution of such remuneration amongst copyright owners. Governmental Supervision varies across jurisdictions, from being limited to antitrust regulation in the United States to sectoral regulators in jurisdictions like the EU, India.