Ren or REN may refer to:

Yuki, Yūki or Yuuki may refer to:

Chitose (千歳) is a common first name in Japan and may refer to:

Tao is a metaphysical concept found in Taoism, Confucianism, and more generally in ancient Chinese philosophy.

Momo may refer to:

Hinata is both a unisex Japanese given name and a Japanese surname.

Nanase is a feminine Japanese given name which is also used as a surname.

Setsuna (刹那) is a Japanese word meaning "a moment; an instant". The word came from a Buddhist term: せつな meaning "split second," which was imported from China but originated in India. It can also be used as a given name as-is, or with different kanji.

Sakura is a common feminine Japanese given name which can also be used as a surname.

Nagisa is a Japanese given name used by either sex and is occasionally used as a surname.

Satsuki is a traditional Japanese name for the month of May (五月). It is commonly used as a feminine given name and, more rarely, as a surname or a masculine name.

Nanami is a popular feminine Japanese given name which is also used as a surname.

Elements of Chinese mythology have appeared many times in popular culture. 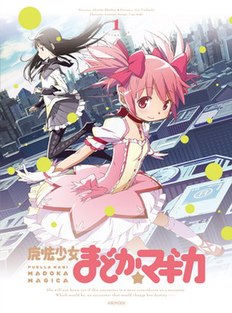 Magical girl is a subgenre of Japanese fantasy light novels, manga, anime, and video games which features girls who use magic or possess magical powers. Magical girls transform to unlock their powers and are often accompanied by an animal mascot, using wands or scepters as a weapon to fight monsters and the forces of evil.

Magi: The Labyrinth of Magic is a Japanese fantasy adventure manga series written and illustrated by Shinobu Ohtaka. It was serialized in Weekly Shōnen Sunday from June 2009 to October 2017, with the individual chapters collected and published into 37 tankōbon volumes by Shogakukan.

Madoka Kaname is the titular protagonist of the 2011 anime series Puella Magi Madoka Magica and its related media. In the anime, she initially lives a normal and happy life, but is then faced with the decision of becoming a magical girl. Created by Akiyuki Shinbo and Gen Urobuchi, and designed by Ume Aoki, the character plays an important role in Madoka Magica media and merchandise.

Sayaka Miki is a fictional character and one of the main heroines of the 2011 anime series Puella Magi Madoka Magica. She is a middle school student who makes a contract with the messenger of magic, Kyubey, to become a magical girl. After she realizes what it means to have a Soul Gem, Sayaka's view of the world is slowly corrupted as she gives up on her own humanity. This culminates in her transformation into a Witch. Sayaka appears in most Puella Magi Madoka Magica media, including the trilogy feature films, print media, and video games such as the smartphone game Magia Record. She is voiced by Eri Kitamura in Japanese and Sarah Anne Williams in English.

Mai is a name that is used as a given name and a surname. 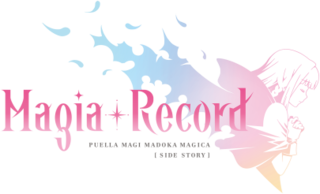 Magia Record: Puella Magi Madoka Magica Side Story is a Japanese role-playing video game developed by f4samurai for Android and iOS, which was released by Aniplex in Japan on August 22, 2017 and in North America on June 25, 2019. The game is a spin-off of the 2011 anime series Puella Magi Madoka Magica, and features a new protagonist named Iroha Tamaki, who arrives in Kamihama City to search for her missing sister.

The Asura; originally referring to a demon or demi-god in Hinduism, Buddhism, and Jainism; has become a standard character type in Western and Japanese literature and popular culture. The following are some examples: