Last updated May 15, 2021
Sub-division of an Indian state district
Not to be confused with Revenue division.
"Firka" redirects here. For the Sudanese village that was the site of a battle in 1896, see Battle of Ferkeh.

Revenue blocks, revenue circles, firka, or patwar circles are the local revenue sub-divisions of the various districts of the states of India. These blocks should not be confused with the similar Panchayath union blocks (Blocks) and taluks . The revenue blocks exist to simplify local administration, and each consists of a small number of revenue villages, governed by a Revenue Inspector. The Revenue Inspector is charged with a number of key administrative roles, most notably the identification and collection of tax revenue. Sometimes the land area in a revenue circle is identified as an ILRC (Inspector Land Revenue Circle) for administrative purposes. [1] [2] While Revenue blocks may be as large as or larger than a tehsil, revenue circles are generally smaller. In the state of Tamil Nadu alone, there are 1,349revenue blocks. [3] 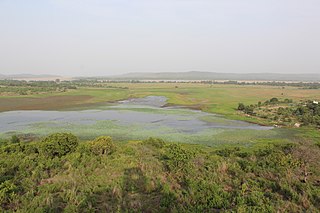 Cuttack district is one of the 30 districts of Odisha state in India. It is located in the coastal part of the state and its administrative headquarters are located in the city of Cuttack. As of 2011 Census, after Ganjam, it is the second most populous district of Odisha, with a population of 2,624,470. The name is an anglicized form of Kataka or Katak meaning Fort – referring to the Barabati Fort. The district is bisected by the river Mahanadi and its numerous distributaries and occupies a large portion of the river's delta. It is bounded by the Angul, Dhenkanal, Nayagarh and Khurda districts to the west while its southern and eastern boundaries touch Puri, Jagatsinghpur, Kendrapara and Jajpur districts.

Madhubani district is one of the thirty-eight districts of Bihar, India, and is a part of Darbhanga division. Its administrative headquarters are located in Madhubani. The district has an area of 3,501 square kilometres (1,352 sq mi) and has a population of 4,487,379.

Pakur district is one of the twenty-four districts of Jharkhand state, India, and Pakur is the administrative headquarters of this district. Pakur sub-division of Sahibganj district was carved out on 28 January 1994 to constitute Pakur District. The district, with a population of 900,422, and covering an area of 686.21 km², is situated on the north-eastern corner of Jharkhand state. The district is bounded on the north by Sahibganj district, on the south by Dumka district, on the west by Godda district, and on the east by the Murshidabad district of West Bengal.

Ambala district is one of the 22 districts of Haryana state in the country of India with Ambala town serving as the administrative headquarters of the district. District Ambala lies on the North-Eastern edge of Haryana between 27-39″-45′ North latitude and 74-33″-53′ to 76-36″-52′ East longitude.

Deganga is a community development block that forms an administrative division in North 24 Parganas district in the Indian state of West Bengal.

Numbardar or Lambardar is a title in the Indian subcontinent which applies to powerful families of zamindars of the village revenue estate, a state-privileged status which is hereditary and has wide-ranging governmental powers: mainly revenue collection and a share in it, the collaboration with the police for maintaining law and order in the village, and it comes with the associated social prestige. In contrast, the Zaildar who was the grand jagirdar and usually had the power over 40 to 100 villages(gao). The Zail and Zaildar system of British Raj was abolished in 1952 in India but the lambardar system still continues in Pakistan and in some places in India.

Baduria is a community development block that forms an administrative division in Basirhat subdivision of North 24 Parganas district in the Indian state of West Bengal.

Tufanganj I is a community development block that forms an administrative division in the Tufanganj subdivision of the Cooch Behar district in the Indian state of West Bengal.

Tufanganj-II is a community development block that forms an administrative division in Tufanganj subdivision of Cooch Behar district in the Indian state of West Bengal.

Phagi is a tehsil and a panchayat samiti in Jaipur district in the state of Rajasthan, India. It has an average elevation of 383 m (1,257 ft). Phagi is also one of the Town in Phagi Tehsil in Jaipur District. Phagi is located on the intersection of SH2 and SH12 of Rajasthan.