Vallankumouksellinen Nuorisoliitto (Revolutionary Youth League), a political youth organization in Finland during the 1980s. VKN was the youth wing of Demokraattinen Vaihtoehto (Democratic Alternative). VKN had 3,250 members at one point. 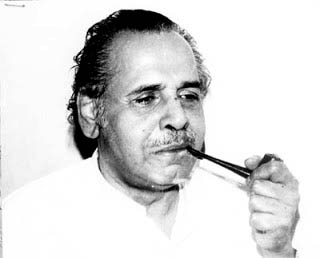 Vadakkke Koottala Narayanankutty Nair, commonly known as V.K.N., was a prominent Malayalam writer, noted mainly for his highbrow satire. He wrote novels, short stories and political commentaries. His works are noted for their multi-layered humour, trenchant criticism of the socio-political classes and ability to twist the meanings of words contextually and lend a touch of magic to his language. 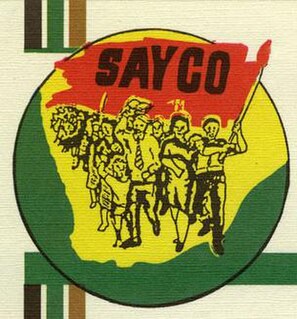 The South African Youth Congress (SAYCO) was a pro-African National Congress youth organization, active in the struggle against Apartheid. The motto of SAYCO was "Victory is Certain - Freedom or Death". In 1990 SAYCO merged with the ANC Youth League.

Gioventù Fascista was a magazine designed for youth in Italy under Benito Mussolini's Fascist state. Its features included stories and cartoons praising the regime and inculcating the tenets of Fascism.

The Indian Under-19 cricket team represents the nation of India in cricket at Under-19 level. The team has won four Under-19 World Cups and has the best win percentage in ODIs (77%) among all Under-19 national teams.

The Hampton Youth Project is a youth centre located in Hampton, London, a town in the London Borough of Richmond Upon Thames.

In enzymology, a N-acetyl-gamma-glutamyl-phosphate reductase (EC 1.2.1.38) is an enzyme that catalyzes the chemical reaction

The Australian Youth Olympics Festival (AYOF) is an international multi-sport event organised by the Australian Olympic Committee for athletes from 13 to 19 years of age. The first event was held in 2001.

Muttathu Varkey was an Indian novelist, short story writer, and poet of Malayalam. He was best known for a genre of sentiment-filled romantic fiction known as painkili (janapriya) novel in Malayalam literature.

Kanana is a community council located in the Berea District of Lesotho. Its population in 2006 was 19,311.

VKN Menon Indoor Stadium is an indoor stadium situated in the city of Thrissur in Kerala, India. The stadium is owned by Kerala State Sports Council. The stadium is used for badminton, judo and weightlifting. The stadium has got a complete makeover for 35th National Games with maple wood flooring, advanced acoustics facilities, has 10 courts and stadium also has air- conditioned hall and modern arena lighting.

The Teaching of Vimalakīrti (Vimalakīrtinirdeśa), originally titled in French L'Enseignement de Vimalakīrti (Vimalakīrtinirdeśa), is a study and translation of the Vimalakirti Sutra (VKN) by Étienne Lamotte. The English translation by Sara Boin was published in 1976 by the Pali Text Society. The original French-language book was published in 1962 by the Catholic University of Leuven's Institut orientaliste/Instituut voor Oriëntalisme.

The Youth March for Integrated Schools in 1958 was the first of two Youth Marches that rallied in Washington, D.C. The second took place the following year. On October 25, 1958, approximately 10,000 young people, mostly of high school to college age, marched to the Lincoln Memorial to promote the desegregation of American public schools. The event was organised by a committee led by A. Philip Randolph, a prominent civil rights activist, who published a statement detailing the purposes and motives for the demonstration. Randolph described the primary purpose as giving 'dramatization to the God-given right of every child, regardless of race or color, religion or national origin or ancestry, to receive an education in the public schools, free from the insult of segregation and discrimination.' He further requested that a delegation led by Harry Belafonte, consisting of five white members and six black members of the Youth March, meet with President Eisenhower to promote the desegregation of schools; however, this delegation was blocked.

Youth March for Integrated Schools was the second of two Youth Marches that rallied in Washington, D.C. The second march occurred on April 18, 1959 at the National Sylvan Theater and was attended by an estimated 26,000 individuals. The march was a follow-up to the first Youth March to demonstrate support for ongoing efforts to end racially segregated schools in the United States. Speeches were delivered by Martin Luther King Jr., A. Philip Randolph, Roy Wilkins, and Charles S. Zimmerman.

Sönke Rix is a German politician of the Social Democratic Party (SPD) who has been serving as a member of the Bundestag from the state of Schleswig-Holstein since 2005.

Stefan Schwartze is a German politician of the Social Democratic Party (SPD) who has been serving as a member of the Bundestag from the state of North Rhine-Westphalia since 2005.