In stable homotopy theory, a ring spectrum is a spectrum E together with a multiplication map

and a unit map

where S is the sphere spectrum. These maps have to satisfy associativity and unitality conditions up to homotopy, much in the same way as the multiplication of a ring is associative and unital. That is,

Examples of ring spectra include singular homology with coefficients in a ring, complex cobordism, K-theory, and Morava K-theory.

In mathematics, a Hopf algebra, named after Heinz Hopf, is a structure that is simultaneously a algebra and a coalgebra, with these structures' compatibility making it a bialgebra, and that moreover is equipped with an antiautomorphism satisfying a certain property. The representation theory of a Hopf algebra is particularly nice, since the existence of compatible comultiplication, counit, and antipode allows for the construction of tensor products of representations, trivial representations, and dual representations.

Algebraic K-theory is a subject area in mathematics with connections to geometry, topology, ring theory, and number theory. Geometric, algebraic, and arithmetic objects are assigned objects called K-groups. These are groups in the sense of abstract algebra. They contain detailed information about the original object but are notoriously difficult to compute; for example, an important outstanding problem is to compute the K-groups of the integers.

In mathematics, an H-space, or a topological unital magma, is a topological space X together with a continuous map μ : X × X → X with an identity element e such that μ(e, x) = μ(x, e) = x for all x in X. Alternatively, the maps μ(e, x) and μ(x, e) are sometimes only required to be homotopic to the identity, sometimes through basepoint preserving maps. These three definitions are in fact equivalent for H-spaces that are CW complexes. Every topological group is an H-space; however, in the general case, as compared to a topological group, H-spaces may lack associativity and inverses.

In mathematics, the classifying space for the unitary group U(n) is a space BU(n) together with a universal bundle EU(n) such that any hermitian bundle on a paracompact space X is the pull-back of EU(n) by a map X → BU(n) unique up to homotopy.

In algebraic geometry and algebraic topology, branches of mathematics, A1homotopy theory is a way to apply the techniques of algebraic topology, specifically homotopy, to algebraic varieties and, more generally, to schemes. The theory is due to Fabien Morel and Vladimir Voevodsky. The underlying idea is that it should be possible to develop a purely algebraic approach to homotopy theory by replacing the unit interval [0, 1], which is not an algebraic variety, with the affine line A1, which is. The theory requires a substantial amount of technique to set up, but has spectacular applications such as Voevodsky's construction of the derived category of mixed motives and the proof of the Milnor and Bloch-Kato conjectures. 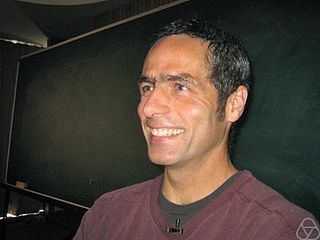 In mathematics, assembly maps are an important concept in geometric topology. From the homotopy-theoretical viewpoint, an assembly map is a universal approximation of a homotopy invariant functor by a homology theory from the left. From the geometric viewpoint, assembly maps correspond to 'assemble' local data over a parameter space together to get global data.