Robert D. Truog is an American bioethicist and pediatrician. He is the Frances Glessner Lee Professor of Medical Ethics, Anaesthesiology & Pediatrics at Harvard Medical School, where he is also the Director of the Center for Bioethics. [1] [2] He also practices in the pediatric intensive care unit at Boston Children’s Hospital, where he previously served as chair of the Division of Critical Care Medicine. [3]

Truog attended UCLA, where he majored in biochemistry, and continued at UCLA for his medical education, obtaining his MD degree in 1980. [4]

He completed a residency in pediatrics at the University of Colorado, where he also served as chief resident. Here he developed a passion for the care of critically ill children. At the time, the leading pediatric intensive care units in the country were staffed by anesthesiologists, so Truog did a second residency in anesthesiology at UCLA before moving to New England to pursue advanced education in pediatric anesthesiology and critical care medicine at Boston Children’s Hospital and Harvard Medical School. Upon completing his training in 1986 he joined the faculty, where he remains as an active member of the ICU staff. He is board certified in three specialties: pediatrics, anesthesiology, and critical care medicine. [5]

Truog has authored or coauthored more than 300 papers in bioethics and related fields, and co-authored two books. [6] He lectures extensively both nationally and internationally. Although his writing and speaking have covered a broad range of topics in bioethics, a major focus of his work has been on definitions of death (especially “brain death”) and their relationship to organ transplantation. [7] In collaboration with Franklin G. Miller, in 2012 he published the book “Death, Dying, and Organ Transplantation.” This critically acclaimed book examines current practices surrounding the determination of death by both neurological and circulatory criteria. The book explores the challenges posed by the “dead donor rule” (the view that vital organs may be procured only from patients who are dead), as well alternatives to the rule.

Another area of focus for Truog has been ethical aspects of disclosure of medical errors to patients and their families. Much of this work has involved conducting dozens of live workshops where clinicians are given the opportunity to practice disclosure of errors with trained actors, exploring the ethical complexity of these conversations while receiving feedback to improve their performance. Truog wrote about this work with his colleagues in a second book, Talking with Patients and Families about Medical Error: A Guide for Education and Practice,” [8] published in 2010, translated into Italian and Japanese, and launched electronically on JHU MUSE January 1, 2012. [9]

Pediatrics is the branch of medicine that involves the medical care of infants, children, adolescents, and young adults. In the United Kingdom, paediatrics covers patients until age 18. The American Academy of Pediatrics recommends people seek pediatric care through the age of 21, and some pediatric subspecialists continue to care for adults. Worldwide age limits of pediatrics have been trending upward year after year. A medical doctor who specializes in this area is known as a pediatrician, or paediatrician. The word pediatrics and its cognates mean "healer of children," derived from two Greek words: παῖς and ἰατρός. Pediatricians work in clinics, research centers, universities, general hospitals and children's hospitals, including those who practice pediatric subspecialties. 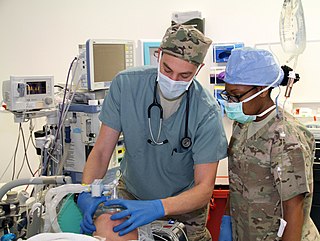 Massachusetts General Hospital is the original and largest teaching hospital of Harvard Medical School located in the West End neighborhood of Boston, Massachusetts. It is the third oldest general hospital in the United States and has a capacity of 999 beds. With Brigham and Women's Hospital, it is one of the two founding members of Mass General Brigham, the largest healthcare provider in Massachusetts. Massachusetts General Hospital conducts the largest hospital-based research program in the world, with an annual research budget of more than $1 billion in 2019. It is currently ranked as the #8 best hospital in the United States by U.S. News & World Report.

The Hastings Center is an independent, nonpartisan bioethics research institute and think tank based in Garrison, New York. It was instrumental in establishing the field of bioethics and is among the most prestigious bioethics and health policy institutes in the world. 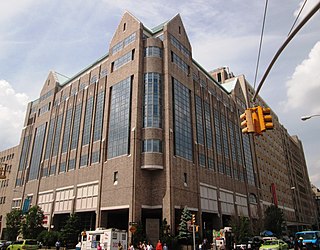 Morgan Stanley Children's Hospital of NewYork-Presbyterian is a women's and children's hospital at 3959 Broadway, near West 165th Street, in the Washington Heights neighborhood of Manhattan, New York City. It is a part of NewYork-Presbyterian Hospital and the Columbia University Irving Medical Center. The hospital treats patients aged 0–21 from New York City and around the world. The hospital features a dedicated regional ACS designated pediatric Level 1 Trauma Center and is named after financial firm Morgan Stanley, which largely funded its construction through philanthropy.

Charles Lawrence Schleien is an American pediatrician, the Philip Lanzkowsky Professor of Pediatrics and pediatrician-in-chief at Northwell Health as of May 1, 2012.

A pediatric intensive care unit, usually abbreviated to PICU, is an area within a hospital specializing in the care of critically ill infants, children, teenagers, and young adults aged 0-21. A PICU is typically directed by one or more pediatric intensivists or PICU consultants and staffed by doctors, nurses, and respiratory therapists who are specially trained and experienced in pediatric intensive care. The unit may also have nurse practitioners, physician assistants, physiotherapists, social workers, child life specialists, and clerks on staff, although this varies widely depending on geographic location. The ratio of professionals to patients is generally higher than in other areas of the hospital, reflecting the acuity of PICU patients and the risk of life-threatening complications. Complex technology and equipment is often in use, particularly mechanical ventilators and patient monitoring systems. Consequently, PICUs have a larger operating budget than many other departments within the hospital.

John Hartwell Harrison was an American urologic surgeon, professor, and author. He performed the first human organ removal for transplant to another. This was a pivotal undertaking as a member of the medical team that accomplished the world’s first successful kidney transplant. The team conducted its landmark transplant between identical twins in 1954. 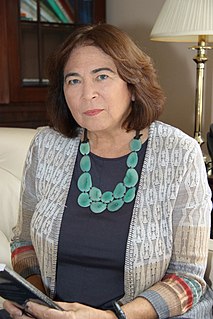 John D. Lantos is an American pediatrician and a leading expert in medical ethics. He is Professor of Pediatrics at the University of Missouri–Kansas City School of Medicine and Director of the Children's Mercy Bioethics Center at Children's Mercy Hospital.

Mark Charles Rogers is an American physician, medical entrepreneur, professor, and hospital administrator. He is a pediatrician, anesthesiologist, and cardiologist with a specialty in critical care medicine. With a medical career focused on pediatric intensive care, Rogers was founder of the Pediatric Intensive Care Unit at Johns Hopkins Hospital, working there from 1977 to 1991. He concurrently served as chairman of the Department of Anesthesiology and Critical Care Medicine beginning in 1980 and was a professor of anesthesiology and pediatrics throughout his tenure at Johns Hopkins.

Iqbal Mahmoud Al Assad is a physician pursuing a pediatric cardiology fellowship at Boston Children's Hospital. She was recognized as one of the youngest doctors in the world when she completed her medical training at age 20. Her name is also seen as Iqbal El-Assaad in some sources.

Mark Schuster is the Founding Dean and CEO of the Kaiser Permanente Bernard J. Tyson School of Medicine located in Pasadena, California. Schuster assumed his position in 2017, and the school opened in July 2020. Schuster is a physician-scientist known for his work on child, adolescent, and family health.